i have long railed about holidays being extended and becoming more and more commercial.

As noted earlier, we got into the spirit shortly after the turn into December with our decorations.  Although i have made negative comments about yard blow up decorations, our neighborhood is aglow with every kind of decoration possible, i think. i like it.

Before leaving for our annual Christmas on Signal Mountain, we had the Boggs’ Christmas. Sister Patsy came over with her son Bill Boase and his wife Laura. We had Maureen’s haute cuisine version of gumbo, not a Christmas turkey, but boy oh boy, was it good. As we were getting it all going, i walked outside on an errand. This is not yet sunset. It is  not the superb photography of Brian Lippe’s sunsets. It just struck as just right for a Christmas celebration.

Quite a few were missing, but those of us who were there fit just about right. It is nice to have a Christmas celebration at home. It felt good.

And nothing pleases Maureen more than to do the house up right for a dinner party. She outdid herself this time with the table decorations. Winter roses (Southwest corner, remember) added to the splendor.  Sarah and Maureen, as they usually do,  made a great team.

Then we left. It was, as nearly all flights are, not as much fun as they used to be. With Maureen’s penchant for being prompt — i was concerned since our flight was scheduled for a 6:30 a.m. departure, she might want to spend the night in the airport — we were up at 3:30. For some reason, neither of us had slept well. Being “pre-TSA” helped but boarding — i remember one or two times in the distant past making a flight by going from curbside to boarding in less than five minutes, arriving at the gate to slide in the plane as the doors were closing — is still irksome at best, infuriating most of the time.

But i was coming home, or at least to a Tennessee Christmas with my sister’s family, which is as close as i can get to 127 Castle Heights Avenue of a half-century ago. We flew American, no longer the pleasant experience i remember from years past. Gouging travelers appears to be the new mission. We flew to Charlotte and caught the next thing smoking to Chattanooga (Sorry, Jamie Jacobs, but the time between flights kept us from a rendezvous with the Uncle Jesse clan; when i have a stop there, i always promise myself someday, someday, i’m going to make it a week layover and actually spend time with my cousins).

But all of my concerns melted on the hop to Chattanooga. There are no photos. i was too entranced, and American Eagle’s Bombardier CRJ-700 aircraft has small portholes, especially when sitting in an aisle seat. Yet, nearly all of the trip was just simply enchanting, carrying me back to many memories. The flight heads west, west, southwest and flies on the eastern side of the Smoky Mountains. It was sunset or twilight for all but the last several minutes of the trip.

The setting sun, the clouds, the folds of the mountains, and the mist cast a magic spell on me. i was back on a countless number of hops around this part of the world a half century ago, peering anxiously out the window to find a familiar landmark or simply to marvel at the beauty of the countryside, the green, green country country side with farmland dimpling the woods below while the mountain sky scape took my breath away. i was taken to those mountains and the cabin across the walking bridge over the waterfall where we stayed time after time in the wonder of those hills.

i even went back to my first read of Zane Grey’s Riders of the Purple Sage as the sky scape mirrored my memory of  Lassiter and his Utah mountains. Magical i tell you, just like Christmas.

Then we landed. Martha met us at the airport. When we arrived at her Signal Mountain home, there was Christmas before us, in the pandemonium only available with a four-year old grand niece and identical twin, two-year old grand nephews: 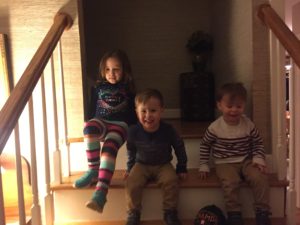 Allie, Culley, and Max in one of their quietest moments. 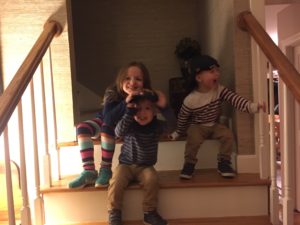 This is the second calmest of about twenty “stair” photos. 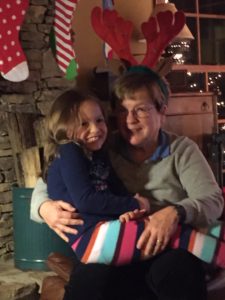 And then there were Happy, as her grandchildren have named her most appropriately (Todd has been nicknamed “Grumpy” which tickles him to no end).

i’m telling you, it’s beginning to feel a lot like Christmas:

Yup, Christmas. And you would have to be an unreformed Scrooge not to feel it.

2 thoughts on “‘Tis the Season”