In the last couple of days, i wavered on my intended mission in the sequestered sojourn to somewhere (Thank  you, Maren Hicks: i like the added adjective). But i’m back on task. And exactly somewhere has begun to reveal itself. Today, i will not blaming myself for taking breaks from writing my book. You see, the timing of this sojourn had some difficulties, some built in interruptions.

i suspect i will write more on this but my last column, number 500, appeared in The Lebanon Democrat today. i wrote and submitted it last week, an interruption to the sojourn i didn’t mind at all. After reading it this morning, i’m taking some time to digest something being part of my life being no longer a deadline to meet, no longer a topic to determine, no longer memories to fill out and clarify.

i thought the College World Series might require me to go off-line to watch Vanderbilt chase a dream of mine again. But Vandy quickly lost to Oregon State in the Super Regionals and the CWS no longer required my attention.

Then there was Father’s Day. And it really should be called “Father’s Days.” Recognition of dads began mid-week last week. Mine took up parts of three days.i had to, had to stop for that.

i also discovered even though i can write fairly solid for two weeks with walking/running breaks included, it’s damn near impossible for me to write on one thing for more than a work week. i can’t explain that except for it being in my nature. So i’m back to considering where i’m at while i’m going to somewhere.

But here is a continuation about where i am really:

i introduced Leopard in the last post. Yesterday, i found out he’s a neighbor’s cat who has taken up part time residence here.

i thought there was another solo act attracted by the birds and the feeders. A squirrel i called Orion.

Brave little fellow. While i was sitting less than four feet away, he would ignore me to chow down on what the birds had spilled from the feeder above. But it turns out Orion isn’t a solo act. Juliana, a friend of the owners of this Air B&B studio, came by to water the plants and fill the bird feeders. She pointed out some of the magnificent pines. They are dead and dying. Why? Squirrels. They are eating the new growth. As we talked, about a half-dozen of these brazen guys start running around pell-mell on patio rails, jumping from tree to tree. So Orion is really a bunch of these guys. Juliana talked about a service to catch them and remove them to another location. That doesn’t make sense to me.

i was happier thinking there was just one Orion living off of dropped bird seed.

So after i unpacked, and settled in, and met Leopard and Orion, i went on a suggested walk. An “Urban Trail,” Arrowhead Trail to be precise, winds up, and i mean up, for slightly less than two miles, probably an average incline of about eight degrees, and in one spot, a twelve degree grade. The path is about the size of a wide one lane road back home in Tennessee or a two-lane road with a turn lane in Ireland. Some views:

At the top is the tableland and “Buffalo Park.” There’s a bronze sculpture of a bison at the entrance with a plaque explaining the park. It says the park began as land dedicated to a game refuge populated with bison and antelope. Since i’ve been here i’ve only seen deer. i think they decided it should be more of a people trail place and the bison would be a danger to the new interlopers so they had them removed to somewhere else (sort of like the squirrels killing the pines). It hasn’t been crowded but there always at least fifteen, sometimes as many as thirty cars parked at the entrance. The trail system is expansive. 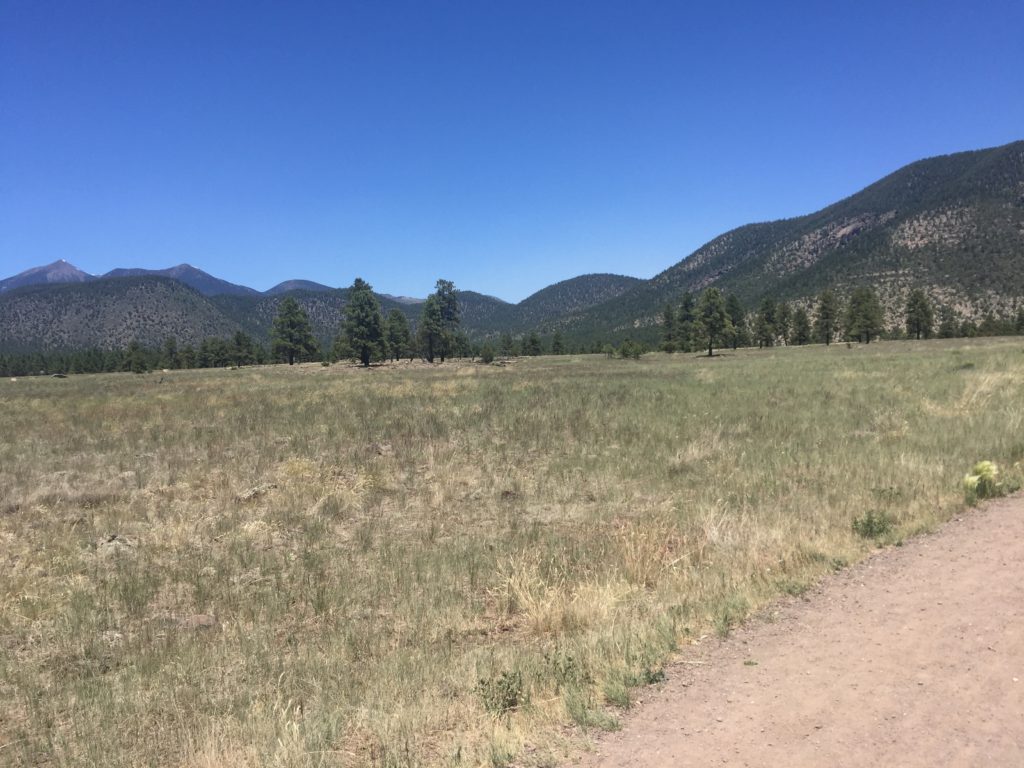 Did i mention this place is up high. This photo is of the higher mountain. It’s mid-June. That’s snow. It’s high up. 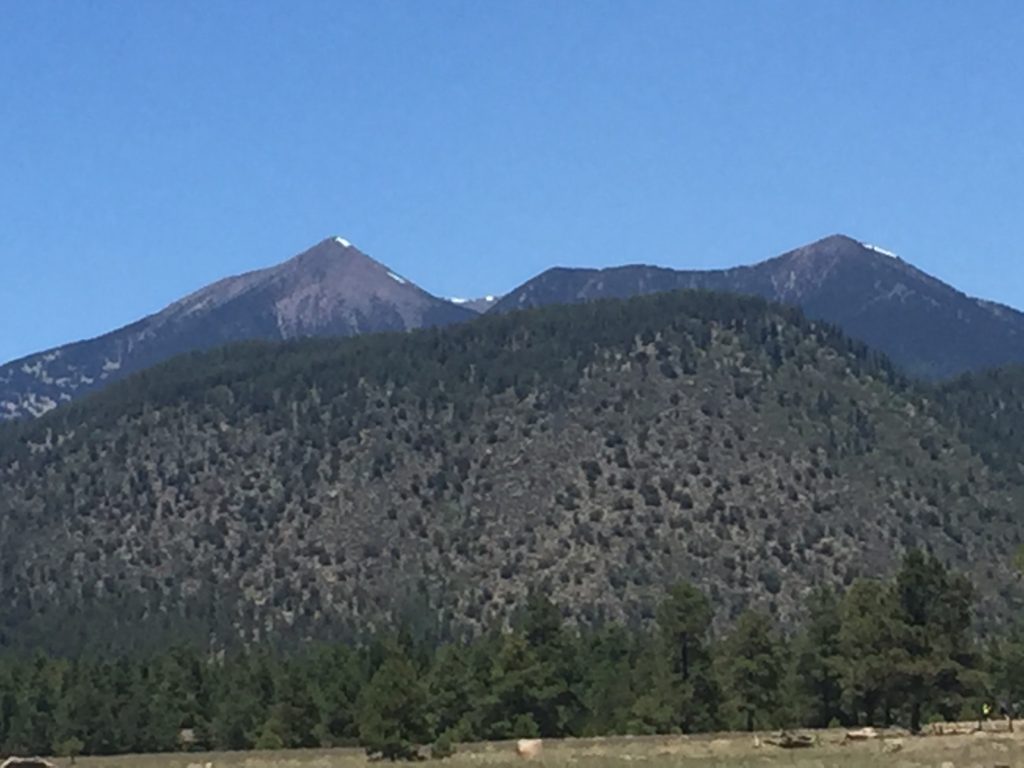 Below is a doe on the trail up, and below that is her fawn in the woods. i’ve seen about a dozen deer on my walks, nothing rare these days unless you live in a city like San Diego. i don’t understand why they are prevalent elsewhere like where i grew up when there were none there when i grew up and not any deer at our house in Bonita where coyotes, bobcats, foxes, and snakes abound. Perhaps they used a deer removal service. 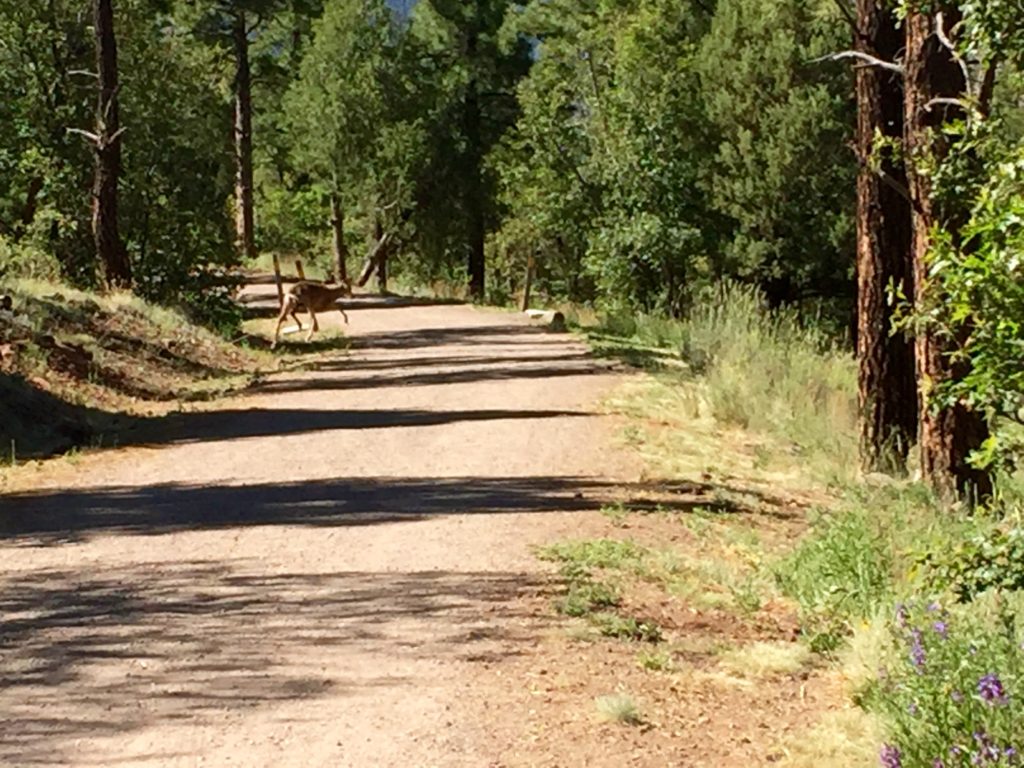 It’s time to get back on that sojourn to somewhere. This has been a nice break.