There was one significant oversight in this post. i did not include JD Waits as a member of the foursome. JD and i were shipmates on the USS Okinawa (LPH 3) and shared the perfect bachelor’s pad, complete with a dock for JD’s sailboat, in the Coronado Cays. JD picked up golf while we were doing our things, and as with all things JD, became a golf legend. He played with our foursome after Lloyd left. When JD went back to Texas, North Carolina, and back to Texas again, my brother-in-law, then became a member of our foursome (some legends there also). Apologies, JD.

Oh, sure there is one more tournament in December.  But it’s sort of a token farewell with a bit of competition. And yes, the organization will continue to exist in some sort of shadow fashion of its old self, allowing some guys to keep their handicaps less expensively. And there may be an event or two during the week, unlike old times when it was always once a month on a Saturday.

It ended, not with a bang, but not with a whimper either. It was the guys playing golf out in the desert for two days, just like they had been doing in late summer or early autumn for…oh, about a half-century as near as i can figure out.

i, myself have been in this outfit for about twenty-five years.

It was the “San Diego Telco (Telephone Company) Golf Association.”

How did a retired Naval officer get into a telephone company outfit?

Well, there is this guy named Jim Hileman. He showed up for my wedding in 1983. At the end of the reception. He is married to one of my wife’s best friends from high school. He worked for the telephone company. We were introduced by our wives. He apologized for being late. Said he had been playing golf. i asked him why he hadn’t invited me.

We’ve been friends ever since.

We even shared Padre season tickets for a long time because we sat together to watch Orel Hershiser break the consecutive scoreless inning record in a 16-inning game (the Padres won 1-0), discovered we were both Pittsburgh Pirate uber fans, and talked ourselves into those season tickets. But that’s another story.

This is not necessarily a wise thing to do. However back then, various groups like the heart association, the lung organization, and the cancer organizations sold discount golf tickets. In the summer using these tickets, one could play golf in the desert essentially for cart fees. So we would go out on a weekend between late June and August. We would stay in Jim’s timeshare and play two rounds for three days. In 120 degree hot, dry heat. Hot, dry heat. From the tips, as they say. Where the pros play. Not terribly bright or healthy, but man, those big boy trips were fun, pure fun.

Somewhere in there, Jim asked me to join the association. i accepted. Jim and i have been in that foursome ever since. The other players have changed, but Jim and i have been a constant. Lloyd Lanksbury and Mike Kelly were the other two when i joined. Lloyd was one of the nicest guys i’ve ever known. He died five or six years ago. Mike Kelly, who remains an absolutely terrific and funny guy and still a very close friend of Jim Hileman (and i consider him the same) moved to Houston so he and his wife could be close to their son granddaughter.

After Lloyd, Marty Linville became a part of our foursome. Marty, Jim, and i remained until the bitter end. My brother-in-law, Dan Boggs, played with us for several years, and Pete Toennies has been with us for about ten years, give or take a few.  This last group, Jim, Marty, Pete, and i have closed it out as a group while all of us have played on Fridays (Jim occasionally) beginning with Marty and me in 1991, about the time i joined the Telco group.

It’s been a fun ride. And the trip to the desert is the only time i enjoy playing silly golf like scrambles, “1-2-3-waltz,” and several others.

Long ago after one group showed up with four yellow balls at the end (they fished one out of a water hazard), the yellow balls were hand marked to prevent such shenanigans.

Banter and unrelenting nasty comments about each other’s traits are part of the tradition. We have been merciless on each other at times. Our verbal attacks would have produced major law suits in more sensitive people. We laugh and work at being more merciless than the one before. There is nothing off limits. And we love it. After all, we are in a class by ourselves as curmudgeons.

Everyone in our group has medical issues. In fact, one of the fabulous foursome, Pete Toennies had to miss the last “year ender” due to a muscle pull. After all, our youngest is 65 and our oldest (moi) is working on 74. To list those issues would make a three or four page document. We laugh at those also. Marty Linville, awarded a silver star for fighting off a Vietcong attack on his artillery battery, suffers from Ankylosing Spondylitis, a disease that grows bad bone and fuses the spinal cord structure. Nearly all of Marty’s spinal sections are fused. He cannot raise his head and constantly looks down.  In spite of that he still plays very good golf.

But it does not get him a pass on the razzing.

On the morning of the last tournament this past weekend, one of the main drivers of the association, another Marty, this one named Marion, came up to us as we were loading our carts for the round.

“Marty,” said the Marion to the Linville, “when i got here this morning, i went through the pro shop. There was a mannequin without a head dressed up in golf attire and there was a brimmed hat on the shoulders.

“i thought it was you and said ‘hello.”

Now Marty the Linville did not get upset or cry or slug Marty the Marion. He laughed. Uproariously. So we decided to take a couple of photos to record the event: 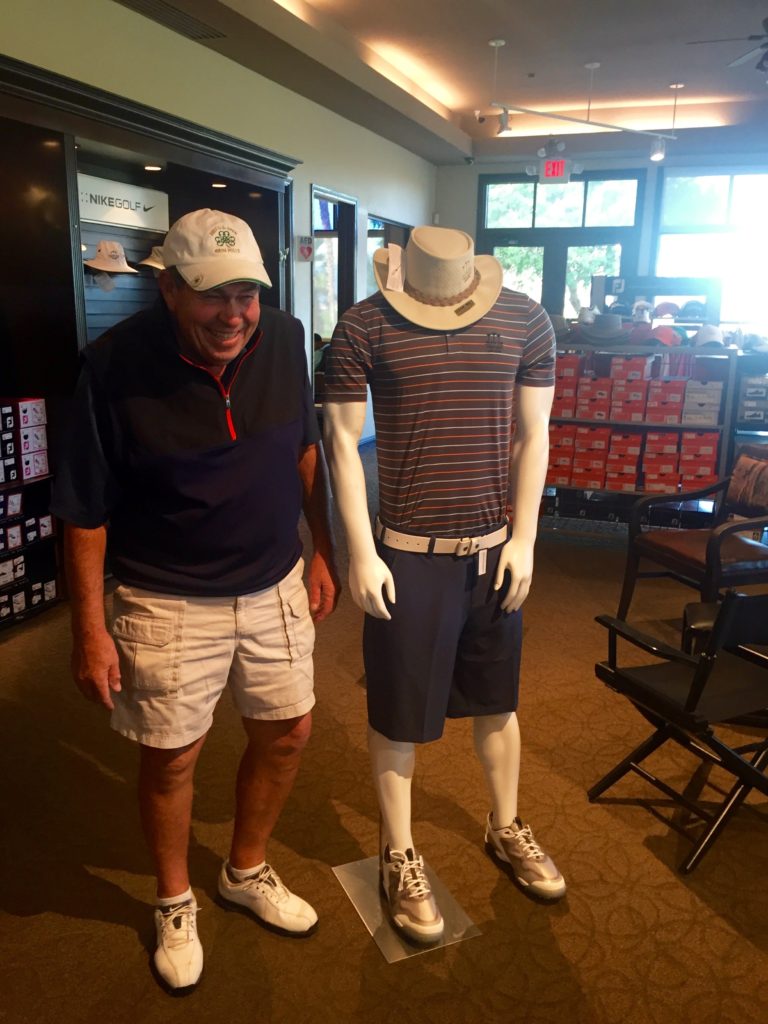 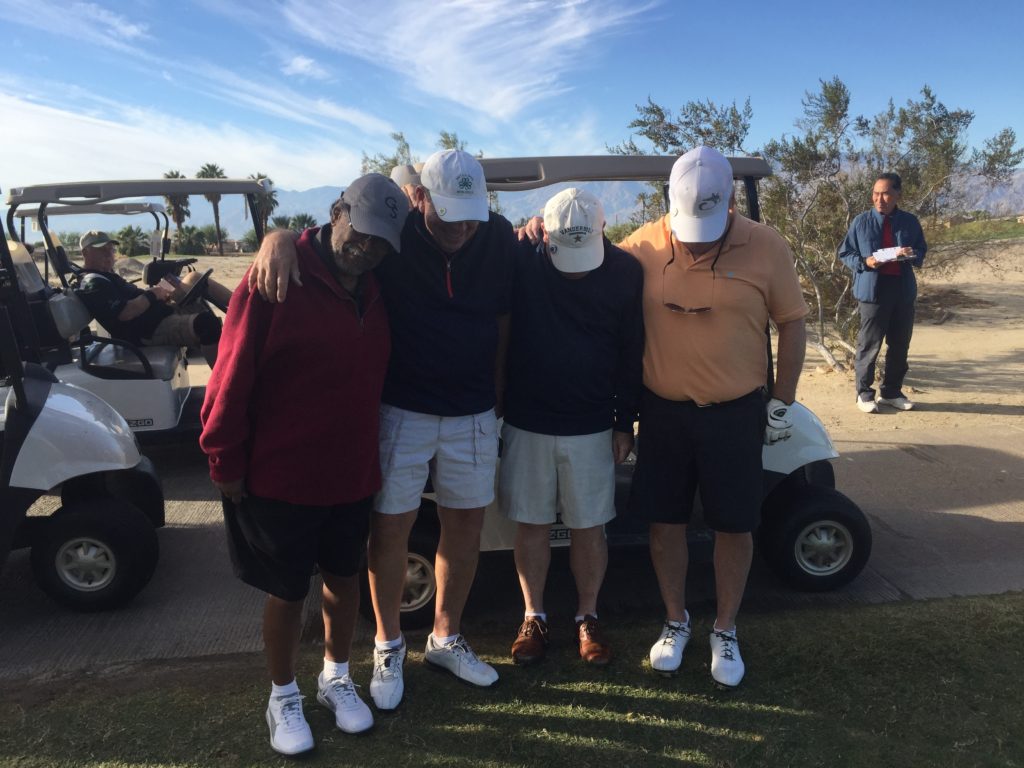 And here’s the straight shot of the group. James Clark, the guy on the left, filled in for Pete. He may be the reason we finished third in the first day “1-2-3-waltz” round and first (with a card off) in the second day scramble. 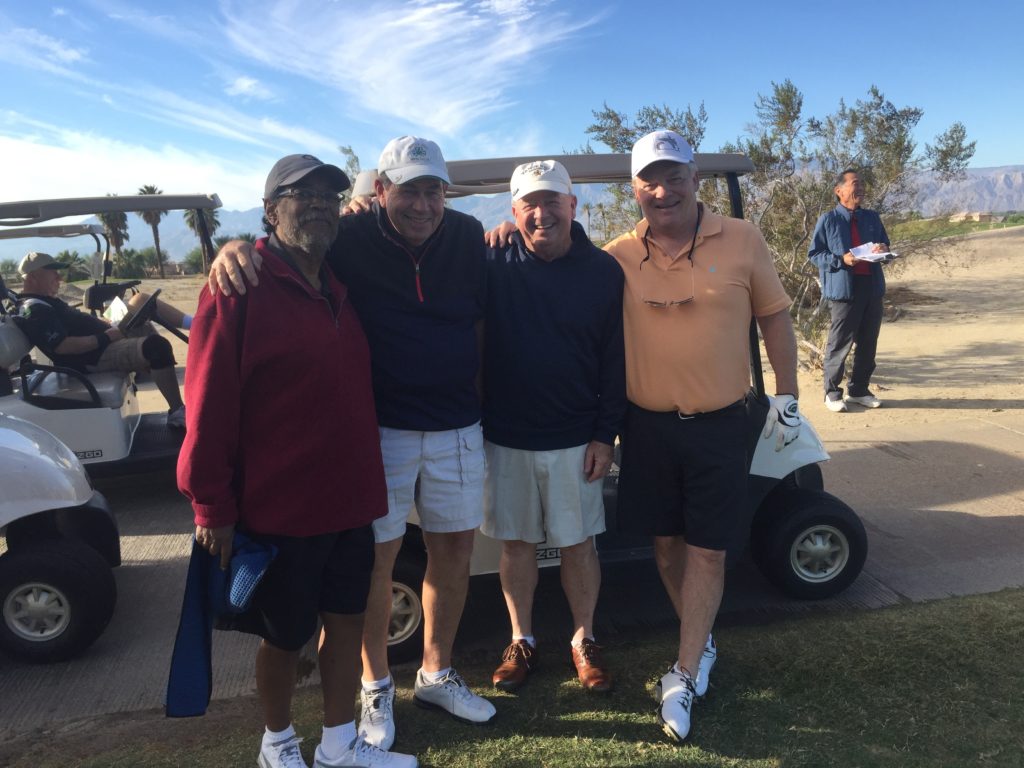 The stories from our playing in this group could make a book (hmm…) and more will be told later.

But it’s gone, over, kaput.

It seems like all good things really do have to come to an end.

i’ll miss this one.

4 thoughts on “The End of a Good Time”