One more iteration. One more…okay, maybe two or so.

But it’s back up. Back in its place at the top of our slope. 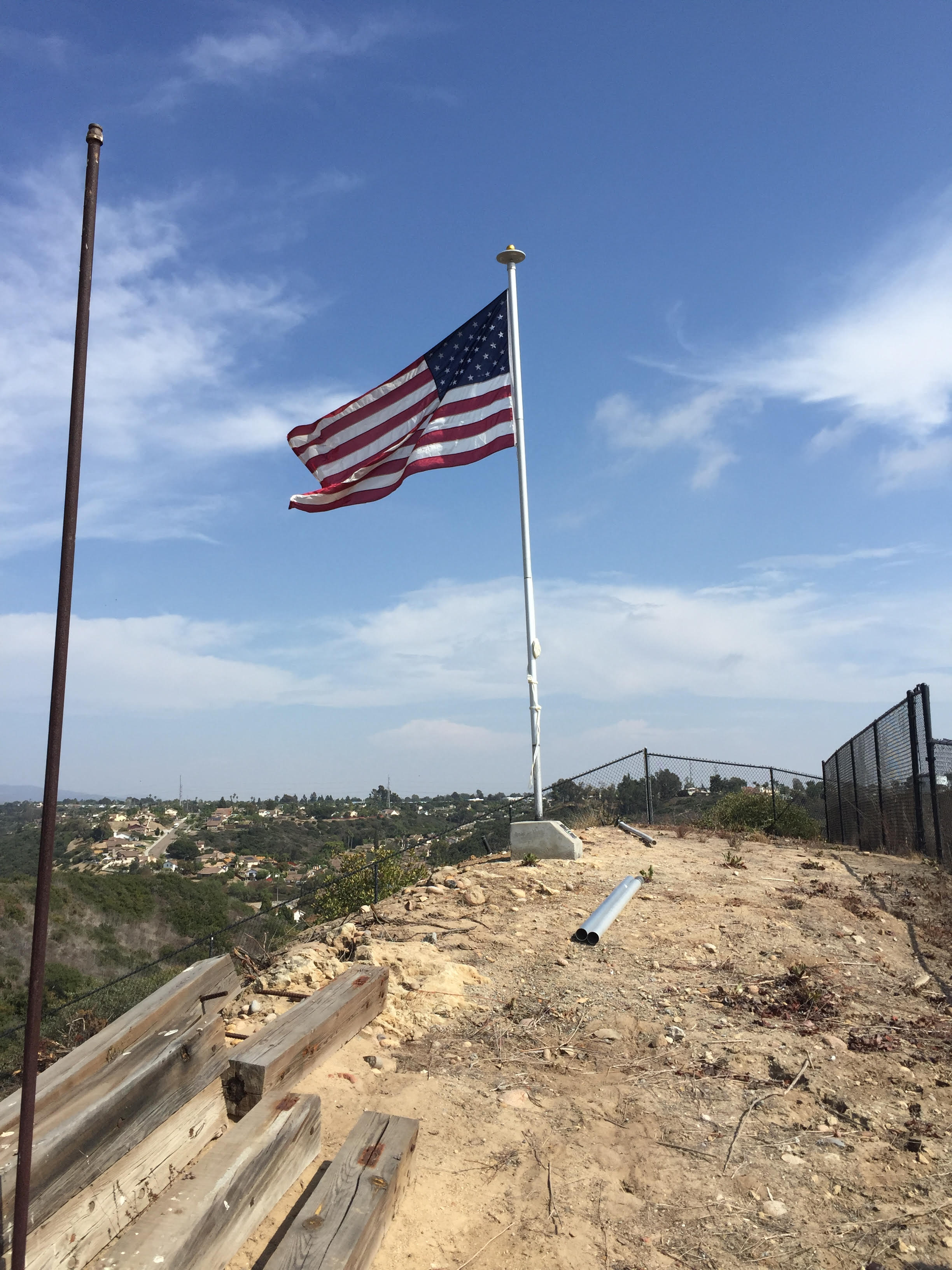 Up. First time in six months. Yeh, it’s temporary. When Paul gets back from his venture, he’ll come over to redo the front yard (another story) and bring some steel pipe that will fit inside. We’ll add a section or two…or three if it doesn’t give Maureen a heart attack.

It’s been a saga.

About thirty years ago. i got this idea of an ensign on top of our slope for me to admire and the neighbors to see. No, no, no, not the Navy officer standing up there. Ensign is also a Navy term for our United States flag. i went and got some plumbing pipe and made a flagpole. It was about twenty feet high with a union half way up. Didn’t last long. Rusted. Union broke. Gave it up.

Then in 1999 when i had to put Cass, my all-time buddy to sleep, i decided to try again. Ordered a flag pole. Aluminum sections. i built a concrete base. Put the urn holding Cass’ ashes inside. Added a bakelite plaque. It’s still up there: “Cass, A Good Dog, 1985 – 1999, To his and our freedom.

So up went the pole, 25 feet of it. Up went the ensign. It was no little thing either, eight by six. We could see it from about five miles away. So could a lot of other people. There was this guy who lived the bottom of our hill. i’ve written of him before. Jesse Thompson. He

was a Pearl Harbor survivor. We had a number of them around here back then. After all, this is a Navy town. Jesse got a group of them together. Turned his home into a Pearl Harbor museum. The group met every Wednesday. He came up the hill one day when i was out, knocked on the door; told Sarah who he was, and asked her to thank me for my ensign. He said the group all agreed it reminded them of Mount Suribachi. That made me feel good, real good and proud.

In those days, i was good at maintaining protocol. Lena, our replacement for Cass, and i would go up every morning at 0800, raise the ensign, and observe colors. In the evening, we would go back up, lower the flag exactly at sunset, and observe colors again. It was a nice way to start and end the day. It was nice view. i even saw two green flashes during those sunsets. Lena enjoyed her walks.

My brother-in-law was temporarily living with us at the time. He kept the house while we went somewhere. He was watching the flag in a winter storm. He said it was beautiful holding stiff into the strong wind, bending the flagpole.

That’s when it broke the first time.

i got another section to replace the broken one and strengthened the pole. The winds can get strong coming off the ocean to the top of that hill. i bought a PVC pipe to fit inside the sections, cut it to the flagpole length and got some neighbors to help me put it up. Looked good.

A neighbor from down the hill came by and stopped when she saw me working in the front yard. She said she was a teacher and seeing my flag each morning on her way to work made her feel all was right with the world. She handed me fifty dollars, for maintenance she said. i tried to refuse, but she was insistent. i finally gave in.

Then the Santa Ana came. Fifty knot winds. The PVC wasn’t that strong, and once again, the flag pole toppled. Next. Paul suggested the thicker PVC. This one needed some muscle no longer available in seventy-year old men. Paul and his boys, with my feeble assistance, got it in place.

Until the winds this past winter. January.  Winter storm. i knew the pole could withstand the projected 40-knot winds. i checked it out. Beautiful sight it was, rippling against the wind, resistant, Suribachi-like. Maureen asked, “Aren’t you going to take the flag down?”

i went inside. The wind gusted to seventy: down went the pole with my ensign.

Six months, i waited. Now it’s up. And until Paul gets back, it will be a bit shorter.

But i don’t care. After all, it’s become a landmark in Bonita: 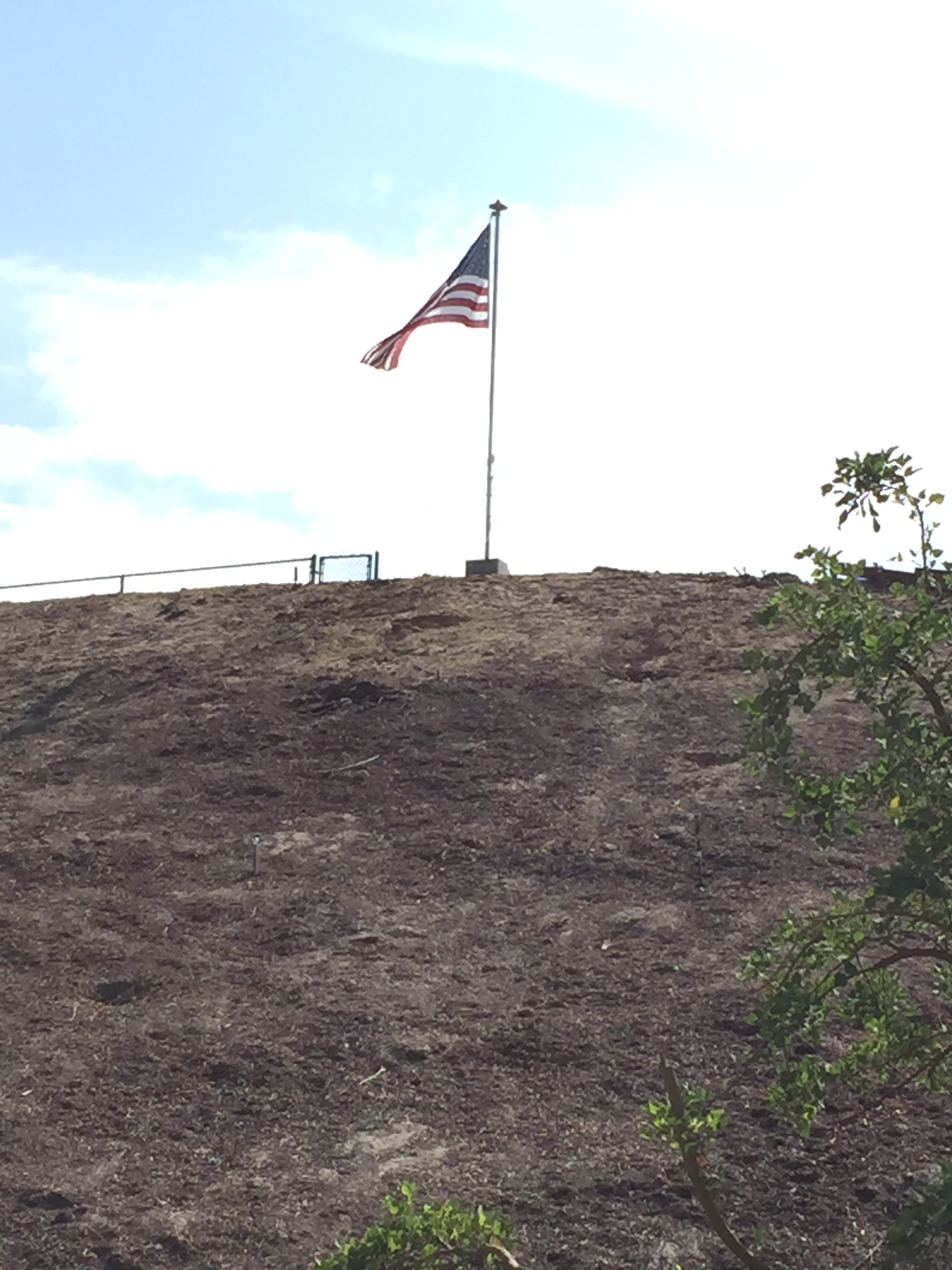