There was this feeling of…how do i describe it adequately?

Stillness, maybe. Peace is in there also. It was out there, but i also could feel it inside me innards. That’s not quite it, but maybe you understand. It was one of those times i’m not quite sure if i just thought of it or someone from my life no longer around is really speaking to me.

Peace and calm. Yeh, that may be it.

It was about 5:45 this morning. i had quietly left our bedroom to allow her to continue to sleep around five. She doesn’t sleep as hard as i do, nor does she, or very few people i know ordinarily arise between 4:30 and 5:00: just an old man who went to sea for quite a while, i guess. She would sleep for another ninety minutes or so. Good.

i performed my morning ablutions, fed the cats, organized the kitchen, checked the weather, email, and text messages. Somewhere in there, i began to realize the sun was rising later. i went out to retrieve the newspaper.

It was about 5:45 as i noted earlier, or about five minutes past first light, one of my favorite moments of the day. The day was announcing it presence in a red-orange hue, a shawl over the shoulders of Mount Miguel, my daily reminder of the Navajos’ hogan front doors facing east to worship the sun rising. i looked up at the lightening sky and was surprised to find Venus hanging there east, southeast, high up against the light blue gray. i turned to my right to find Sirius and Rigel holding out against succumbing to the dawn. Turning more,  i saw the moon still claiming its presence and above it,  Mars joining the resistance against the last gasp of summer clamoring to claim its space, clamoring a fierce denial of decline with 100 degree heat projected by mid-day. A couple of days of that last gasp facing us like a bear pontificating futilely, not a great prospect for those who rejected air conditioning.

But the bear had not roared yet. There was a cool quiet breeze. The neighborhood, like Maureen, was asleep. This peace, this stillness came over me like a white organza cloth. With all of the turbulence disturbing my world, it was a wonder to feel the calm in the middle of the storm, like in the eye of the hurricane but somehow above it.

i decided someone was talking to me. i wished it would continue, knowing it would not, for i had things to do.

Like make the breakfast run. Every week or so, i make a run to Donny’s Café, down the hill. The main purpose is to get my whole bean coffee to gratify my snobbish French press coffee fix

Columbian is preferred but Donny’s blend is almost as good: his coffee for Café Moto is roasted fresh each morning. But not today. Today is for Maureen’s sesame seed bagel with cream cheese, Sarah’s everything bagel with cream cheese, and my lox and bagel (onion bagel preferred, everything the norm since somehow onion bagels are dwindling in supply, and the lox is not really, but fresh salmon and with tomato, avocado, and capers). Donny is one of my favorite folks in Bonita. A local, he left for a while to be  a professional bike racer in Spain before coming home and opening a kiosk outside his parents’ bicycle shop. When his parents sold the business, part of the deal was to create a small cafe on the back side of the building where Donny and his wife Rosie have been operating to a large and appreciative group of locals ever since. i first met Donny at his kiosk in the middle 90’s when i would go to work early and get his coffee en route. Donny is a good man. He is friendly, always helpful and a good Christian in the best sense of the word.

i come home to Maureen rising and we eat outside before the bear roars. Maureen fills the birdbath, and the birds in a goodly number began flocking to the nearby coral tree, some already venturing to the birdbath while we eat and read the newspaper. 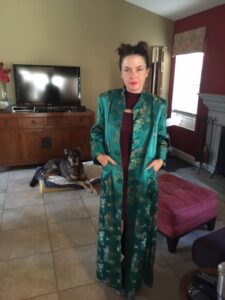 Sarah rises and finds her cold brew coffee and bagel. Last night, she went to Heather’s house to watch the Disney debut of “Mulan” in a sort of celebration. (Heather and Johnny are engaged. Sarah and Heather have been close friends since high school). Sarah wore her grandmother’s kimono robe to play her part.

We perform our outside tasks before the bear really roars, preparing to hunker down with a closed, wonderfully insulated house (thank to Maureen). AC may not help anyone later today as rolling “brown outs” are more than likely throughout Southern California for the next several days. 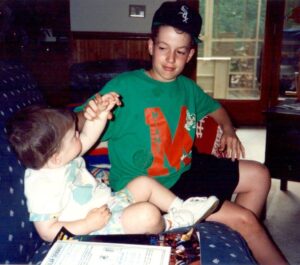 And i contemplate, or contemplate as much as an old curmudgeon can contemplate. Yesterday was my nephew’s forty-first birthday. Tommy Duff is as close to a son as i have. i am proud of him. Maureen and i agree he has grown up to be a really good man. Of course, he is into sports journalism, and i did my share of that. This is Tommy and Sarah in 1992, our first Christmas on Signal Mountain, our go-to tradition.

The house is shuttered. Fans and the one portable air conditioner are heaving heartily. We will shut most of them down around three this afternoon to do our part in energy conversation. i have threatened to go shopping at Costco and just wander in the produce section, the coldest place on earth except for San Francisco in July. But it is an empty threat.

i have rambled. i am a curmudgeon. This morning, i had peace, calm.