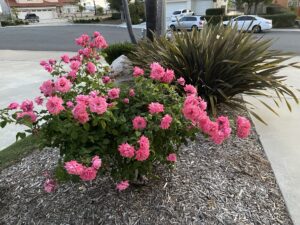 When i go out to retrieve the newspaper, my reverie with first light disappears as the days grow longer. Still, that early morning activity, sans stars and short though it may be, provides me with moments of contemplation and reflection. Southwest corner early mornings are good for such things.

This morning (Saturday) Maureen’s roses brought a recollection to my mind, a good thing for an old man. Maureen’s roses are like nearly everything she does: planned well, never overstated, with taste and flair, and flat out lovely, like the lady herself.

Viewing this particular rose bush of hers, a memory rose to my consciousness from forty years ago. Maureen and i had become a twosome, not yet committed long term, but moving in that direction. We had become close and playful. Dinners and music. Laughter and just getting to know each other. i had given her some gifts, nothing large or anything, but i like to think i’m pretty good at giving meaningful gifts.

The USS Okinawa was in a major seven-month overhaul. i was the ship’s overhaul coordinator. Maureen was an account executive for one of the area’s top office interiors firms. She had a couple of projects for providing desks and other equipment for Navy offices on base.

It was around ten in the morning. i was up in my small office on the 03 level, going over work status, problems, coordination of numerous projects.

Maureen, on her way to one of her on-base clients, picked up an impressive floral arrangement. Now, Maureen dressed to the nines in her business outfits was a knockout business lady in high heels. She parked close to the pier where Okinawa was moored, walked down the pier, climbed the two-story platform to the brow and walked across to the quarterdeck on the flight deck. She handed the impressive arrangement to the Officer of the Deck and asked him to have it delivered to Commander Jewell.

When the OOD, i suspect with a dropped jaw, accepted the flowers and told her he would comply. Maureen turned and retraced her journey to her car.

The OOD handed the flowers to the messenger of the watch and ordered him to deliver the arrangement to me. The messenger traversed the flight deck, climbed two levels of ladders to the passageway and walked to my office.

Obviously, i was thrilled, impressed. Just flat blown away.

Now, this was the Navy then. Scuttlebutt went crazy. Sailors were jabbering about this lady, incredibly beautiful and sophisticated. And she had given Commander Jewell a bunch of flowers. Nobody had ever heard of such a thing. Maureen and i, through no fault of my own, had become a legend, a sea story on USS Okinawa.

i looked at those roses this morning, remembered the sea story, chuckled quietly, took the paper to our breakfast table, and made our pot of coffee.

2 thoughts on “Roses in the Morning”