She would have been 98 today.

She was unique. Later, she would get the magazines with special deals and buy things for us, some useful, some funny for birthday and Christmas presents.

i have a hard time throwing things away, especially when they are a reminder of people or events important in my life. i keep one of her gifts, a glasses holder on my bedside table. When i put my glasses in there at night or take them out in the morning, i always think of her.

i cannot express how much i loved her. She was my aunt, Bettye Kate Hall. i loved him the same. He was my uncle, Snooks Hall.

They were very special people. 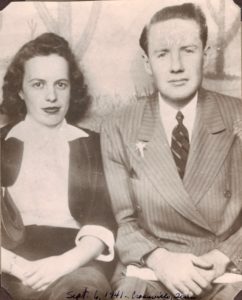 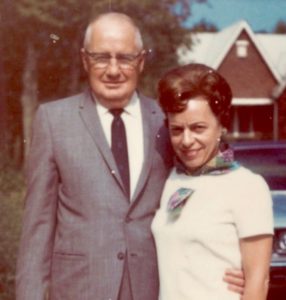 Sometimes, small things catch my interest. When we landscaped our home in 1993, we planted two Mexican coral trees in the backyard along with a carrotwood tree. The carrotwood became huge. Its roots destroyed the stuccoed planter in which it was planted and was threatening the sitting area we had constructed in the south corner. Its branches loomed over the nearby coral tree, cutting out the coral tree’s access to the sunlight.

Last year, we finally had it cut down. More landscaping is in progress. But this morning when i went out to check on our strawberries, tomatoes, and Maureen’s herbs in the garden planter boxes, i stopped to look at the two remaining trees (there is a magnolia tree between them). The one near where the carrotwood had been fought for sun and grew accordingly. Maureen does not like the ill-formed shape, especially when it drops its leaves for the winter. i find it…inspiring i guess is the best word for my feelings. Cool tree, a survivor:

If you don’t know already, i am a huge Vanderbilt sports fan. There are other college teams i like, and i try to remember to not dislike other teams. i usually do that pretty well.

i sort of lost that perspective last night when the Louisville pitcher, Luke Smith, pitching superbly, lost control of his emotions and said some things you could clearly understand from reading his lips. i thought it was inappropriate and got a little upset he was not removed from the game. i mean, i say the words Smith yelled all the time, after all, i was in the Navy.

Then, the Vandy Boys made me proud and a little bit more humble. You see, they ignored the profane taunts except maybe for motivation and took Smith to task in the last inning, eventually winning the game and gaining a berth in the College World Series championship final games. Then when the game was over and the interviews began, the Commodores taught me a lesson.

Pat DeMarco, the centerfielder explained, “We try not to give energy to the other team. We know how that works. So we just tried to re-center ourselves, come back and focus the energy on us, and we came out on the right side.”

i am happy Vanderbilt is in the CWS finals three times in the last six years. i am glad Coach Tim Corbin gains success with an emphasis on education and overall development of his players into men to be respected.

But i am proud, real proud of the team, for handling a potentially inflaming incident the right way.

The Vandy athletic catchwords are “Anchor Down.” Having spent some time at sea, i prefer “Anchor Aweigh.”

The Vandy Boys are underway, sailing fast, and most importantly, doing it right.

i think i better get started on that trellis.