Maureen and Sarah often laugh at me about this.

Not so much Sarah as she is moving fast for work and rarely has breakfast with us. But she’s definitely in on the laugh thing. It has become a behind the back smirk kind of laugh because they don’t quite get it.

They shouldn’t. They were both waitresses in the previous lives and economy of service takes rule over formality.

i, however, am into formality, at least some of it…some of the time…when i want to be formal.

At least when it comes to place settings.

Now both of them know more about place settings than i do. Maureen finally informed me years ago i was putting the knife down with the blade pointing the wrong way, pointing out rather than in. i had no idea. But there are a lot of things Maureen knows that i have no idea about. But these two women have that efficiency thing going. They don’t put out any silverware that isn’t going to be used.

You see, i think i’m a lot like others raised the way i was. The children took part in daily chores. One of our chores was putting out the place settings for meals like breakfast: plate, knife, fork, spoon, glass of orange juice for every one, glass of milk for the three children, and coffee cups and saucers for mother and daddy. On the round oak table. We didn’t use place mats. We sure as hell didn’t use chargers. Those chargers were for fancy meals like Thanksgiving and Easter and Aunt Evelyn’s and Uncle Pipey’s in Redbank.

We didn’t put out napkins either. Don’t know why. i do know when Douglas Lawrence came to visit from Gotha, Florida one summer, and we all sat down for breakfast, Mother had put napkins at every place setting. Some smart-ass kid asked why we had napkins out because we never usually had them. It was a moment i will always remember because my mother did the great curse on me with her legendary raised eyebrow scowl, behind Douglas’ back, of course.

But anyway, setting  out the place settings and getting the kitchen for the empress chef to do her magic. It is a routine, something i rarely have these days. But is my morning salve, meditation, quiet time, if you will, even if it is continually interrupted by the two cats who crave my attention then and ignore me pretty much the rest of the day.

There are connections, you see. It takes me back to 127 Castle Heights Avenue. That is a good feeling. It connects me with my father. After my parents moved to Deer Park, he gradually took over the meal preparation from my mother and her frailties, saving the really good stuff times for her to either take over or take charge, sometimes a bit of both when Tennessee country ham, biscuits, red-eye gravy, fried corn, squash casserole, and fresh tomatoes; meatloaf with mash potatoes, and the aforementioned biscuits, and several other legendary mother meals were to be served. But most of the time, it was my father in that pretty much new territory called the kitchen and breakfast table.

He always got up early. It became a daily thing after they both retired. When i visited Deer Park, i normally stayed in the guest bedroom with an adjacent wall to the kitchen cupboard. i would awake to his sliding the door back and getting out the morning fare, putting the coffee on, and rumbling around setting the table, getting everything ready (he specialized in cereal, especially Sugar Frosted Flakes with Tony the Tiger. Then he would call, “Mother, breakfast is ready.”

i get up early too, significantly earlier than he did. Perhaps that comes from my years at sea. i feed the cats, get the paper out of the driveway, grind the coffee beans (he got his from the Folger’s big tin can), start the coffee, put Maureen’s 647,000 condiments, chocolate, frothing machine, grater, and lord knows what else so she can make her coffee her way…with very little coffee but a lot of other stuff. i turn the kitchen sink faucet into a drip because Bruce Willis, the cat, likes to drink his water straight just like my coffee black, period: perhaps it’s a male bonding thing. i put a bowl of water out for dainty Dakota, the female cat. i get out the vitamins and the standard prescriptions for this old folk, i open the blinds so we can look out the window. Sometimes, i will get out the Bluetooth speaker and set it up for classical guitar during the meal, but i usually forget, and then…

i set the table.

From the table, i remove the table linen my great grandmother made by pulling out the threads in a decorative pattern for the border — my sister Martha once admonished me for calling it crochet and corrected me with the correct name of the craft, but of course, i forgot — and the flowers in the vase, usually Maureen’s roses, which leads me to humming Crosby, Stills, and Nash’s “Our House” and put them on a nearby counter. i pull out the place mats like the ones we never had growing up, i retrieve our napkin rings from their drawer — Now i know about napkin rings for when i got to my first Navy ship, the wardroom meals were formal to the nth degree, place settings perfect, the messes perfunctory formal, damn near religious in the unvarying courses, and napkin rings, round silver napkin rings, individually marked with care — and put them in their proper place.

i get out the silverware. We have about 368 sets of silverware for reasons far beyond my ken, but i like a certain set. i put the fork on the left side of the mat; the knife on the inside on the right side, blade facing inward, and then THE SPOON outside of the knife. Unless we are having soup or cereal, the latter being rarely, Maureen and Sarah never put out the spoons.

Then i turn out the overhead light and admire my work. The spoons are in place.

i know when they see the settings, they will laugh behind my back. Silly boy.

It’s tradition, it’s connection. It’s me being me like where and how i was raised. 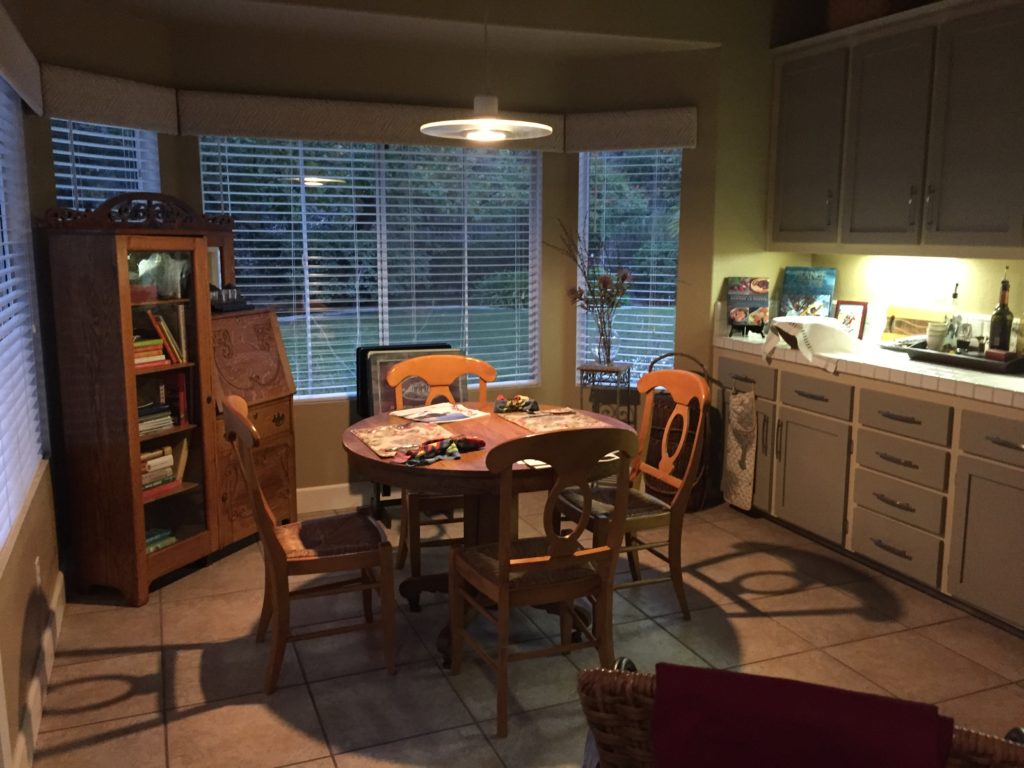