It is Monday morning. i am awake, waiting for Maureen and Alan and Maren Hicks to rise before packing.

It’s travel time. Back to San Diego. Home. The drive to San Francisco’s airport will take about an hour in traffic. The flight will be just over an hour, but the airlines have turned short trips into all-day affairs.

It has been a glorious weekend with the Hicks.  Alan and Maren took us to Alan Jr’s wine shop, Arlequin over on Hayes Street,  for tasting wines from the Canary Islands — the wines were delicious and unique — after we arrived on Thursday. Friday, we spent several hours, i gawking, at “Monet: The Early Years” exhibit at The Legion of Honor Museum, a piece of art in its own right.

Following lunch at Alan’s Sausalito Yacht Club, we drove to their home in Sonoma. Alan grilled pork tenderloin. Maren and Maureen prepared vegetables and salad. i sat around.

We studied the stars in their backyard with the shadows of the grapevines in the abutting Sebastiani vineyard looming in the dark across the fence.

Saturday, the ladies went to book signing of a cookbook writer, featuring her new book on Middle Eastern cuisine (i think). Alan and i walked around Plaza de Sonoma and nearby streets with a late lunch.

Steve and Maria Frailey joined by their neighbor, Leslie Yellen flew in from San Diego midday Saturday. We met the Frailey’s and Leslie at Murphy’s Pub for a delightful celebration of Maria’s 55th birthday. Sara Petite and her band performed. Sara has been a long time favorite of Maria and they are friends. Sara is also a terrific song writer and singer. Her band matches her in talent. We sat up front. Except for some way too old yahoo playing the spoons, it was a wonderful evening.

Nap time before dinner with the seven at the Depot Hotel, no longer a depot and no longer a hotel, but a great place to eat Italian al fresco, sorta.

Then, it was over. As usual, i woke early. Packing day. But first at first light, i walked in the backyard on the tan rock path. The day would be overcast. It was spring cool. Near the fence, i stopped to gaze at the irises, Tennessee’s state flower, you know. For some reason, it brought a neo-gospel to mind. i thought it came from slaves. It didn’t. Some guy named Tom Dorsey — no, not that Tom Dorsey — wrote it in 1947, and the country and rock singers, even Elvis rolled with it, even later, Little Richard. i liked it better when i didn’t know better and thought its origin was different. But it was still just right for the moment: the early morning moment next to a vineyard in the Valley of the Moon. Sonoma. Fit the weekend too.

As i looked at the flowers, i remembered the words:

i’m tired and weary but I must toil on
Till the Lord come to call me away
Where the morning is bright and the Lamb is the light
And the night is fair as the day.

There the flow’rs will be blooming, the grass will be green
And the skies will be clear and serene
The sun ever shines, giving one endless beam
And the clouds there will ever be seen.

Where the bear will be gentle, the wolf will be tame
And the lion will lay down by the lamb
The host from the wild will be led by a Child
I’ll be changed from the creature I am.

No headaches or heartaches or misunderstands
No confusion or trouble won’t be
No frowns to defile, just a big endless smile
There’ll be peace and contentment for me. 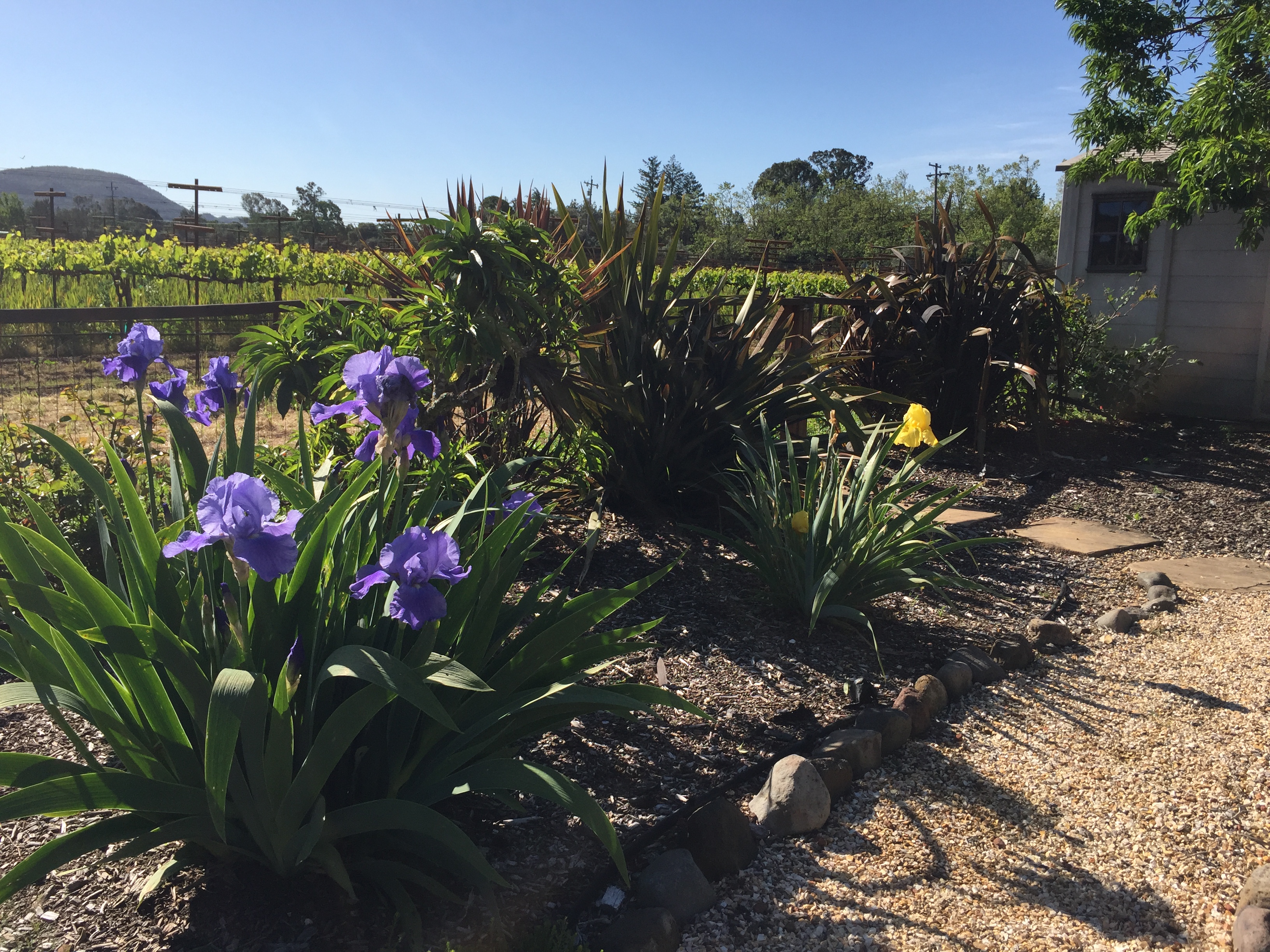 Thanks, Steve, Maria, Leslie for sharing. And thanks, Alan and Maren for peace in the valley.

2 thoughts on “Peace in the Valley”