i first noticed him when he shuffled up to the bar, smiled at the bartender and ordered a glass of chardonnay.

On several earlier stops at the Bonita Golf Club for lunch, i had complained about a pickup parked illegally close to the door of the restaurant. Then one day, i noticed it had a sticker on the rear bumper that read “Pearl Harbor Survivor.” i decided whoever owned that truck deserved to park anywhere he wanted to park. i would no longer whine about the parking.

When i watched the old man shuffle, i wondered if it was him. The next time i saw him i was having a beer at the bar waiting for a take out order when he again approached the bar, ordered his chardonnay, and shuffled back to his table in the corner in the wing closest to the course 18th green. The bartender, a pretty young lady, smiled while she watched him shuffle back. i asked her if he was the one who owned the truck. She told me he was, he was 99, and added he was wonderful. i agreed.

i saw him several other times and now we smiled, nodded, and exchanged greetings. After each time, i regretted not asking him his name and getting more information about him.

This morning, as i noted in this morning’s pictorial post, i raised my flag atop my hill. The flag had a role to play later today.

Our cleaning ladies came today and the kitchen was embroiled in their efforts at lunchtime. Maureen and i went to the golf club for lunch. They serve great food with a variety of choices. Maureen had an afternoon appointment and left in her car. i finished my sliders and fries, paid my bill, and headed out. i looked back in the corner. The shuffling old man was sitting by himself. i decided to rectify my earlier regrets. i walked to his table, introduced myself and asked his name.

i was taken aback a bit. i knew of Jesse Thompson, but on a Google search about a year ago, i could only find older references. i thought he must have passed. And here i was talking to him.

i asked him where he lived. He told me it was down the hill from my house. i asked if he was the guy with the Pearl Harbor museum in his home and had weekly meetings with other Pearl Harbor survivors at his home before they abandoned those meetings recently because they were down to three or four in San Diego and those had trouble making the meetings for various health reasons. He acknowledged it was his home. i knew he was the one. He kept apologizing for being forgetful. i told him i had been forgetful for a long time.

Then i asked him if he remembered coming to my house about ten years ago. Maureen and i were out, and only Sarah was home and answered the door when he rang. He told her who he was and gave her his business card. He told her about his club and how they would come out of the meeting and look at my flag in a moment of silence for the flag reminded them of the one on Mount Suribachi, the locale on Iwo Jima where six marines raised the U.S Flag to signal the U.S victory and become a national icon.

Then he told me he came to the club every day. i finally asked him if i could use his name and write about our meetings. He said yes. Then he apologized again for not remembering everything, and explained his reason for his daily trip for his chardonnay.

“You gotta stick to a routine when you are my age,” he explained.

i applauded him. We talked a bit more, and i took my leave, promising him i would like to talk him every time i saw him in the club. He said he would like that.

So i raised my flag this morning and talked to a hero at lunch. i didn’t lower the flag at sunset. i sort of hoped he would come out of his house after nightfall and see that flag lit by my lights to make it all right by the regs.

It was a gesture to thank you, Jesse Thompson. 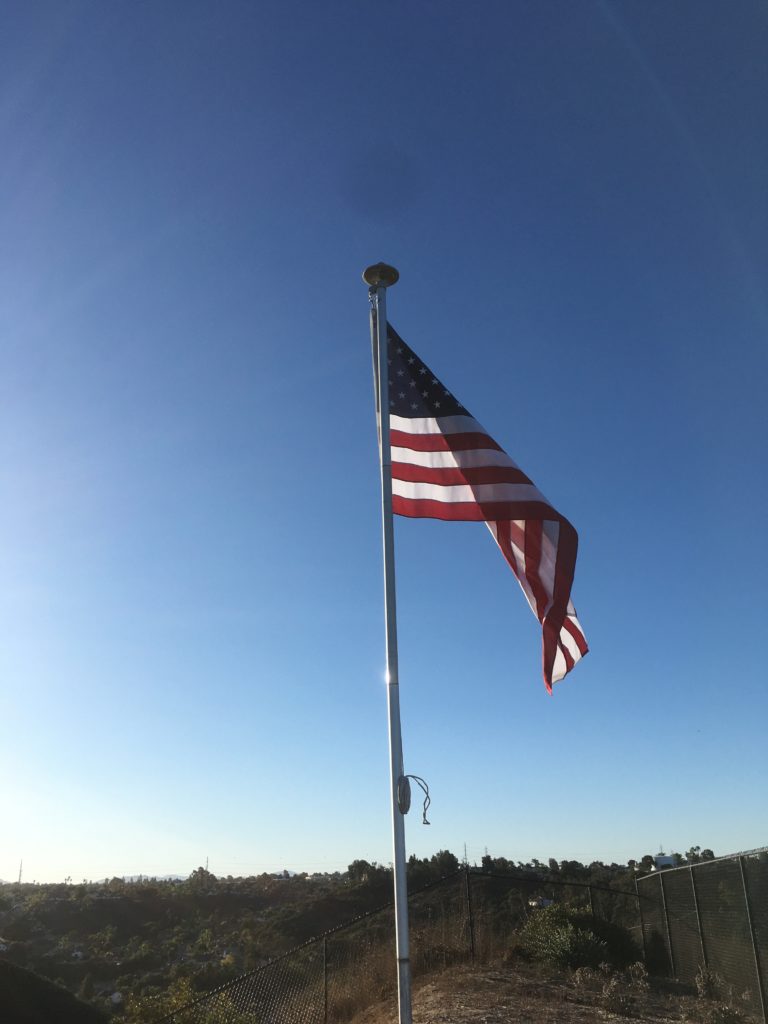 If you would like to read my account of my first knowing about Jesse Thompson, it was a column written for The Lebanon Democrat. i have included the column below:

Notes from the Southwest Corner: Veterans Day and Flags on Hills

SAN DIEGO – An annual event passed almost unnoticed this past weekend here in the Southwest corner.

With San Diego being a big Navy town, it is difficult to understand why the “Day of Infamy” at Pearl Harbor went by so quietly on Saturday. I am not sure how much Lebanon observed the event which catapulted the United States into World War II, but I suspect it was much the same as in the Southwest corner.

I, too, was remiss in marking the day in any meaningful way. It seems we celebrate on multipliable numbers like 10, 25, 50, 100, etc. This was the 67th year since the Japanese hit the beautiful harbor in Oahu with all they could muster, not a very multipliable number. Perhaps this was the reason for mine and others’ oversight.

Perhaps my lack of interest was abetted by continuing to come down from my grandson’s visit to the Southwest corner over Thanksgiving.

We had the big turkey dinner with my smoked turkey. We went to the San Diego Zoo. We went to the beach. We went to our favorite Japanese restaurant for my daughter Sarah’s 19th birthday. All of the events, with the exception of the present opening at the birthday celebration, found Sam as the center of attention.

I am still winding down from his stay and find myself looking at the photos and reminiscing about how wonderful it was. I’m sure all of the grandparents who read this will nod their heads in agreement and understand.

Perhaps my inattention to the significance of the day was overshadowed by our short trip out to the desert with friends. The feature of last week was a round of golf in the winter Mecca for Hollywood celebrities with streets named after Bob Hope, Frank Sinatra, Gene Autry, and Fred Waring – as I type out “Fred Waring” on the computer,  I  wonder how many of those who read this will remember Fred Waring and his orchestra.

Since most of my trips here are in the blazing heat of the summer where 120 degrees is not uncommon, the journey and golf here in 70 degree weather was especially enjoyable.

Perhaps my lapse was due to the ballyhoo over Christmas. Even with the economic downturn, decorations here in the Southwest corner seem no less prolific, ads appear to be even more beseeching for gifts than usual, and Christmas carols are a constant background at our home.

And on Saturday, the big event was “December Nights,” at Balboa Park. It was called “Christmas on the Prado” for years before some over zealous political correct politicians changed the name. Sarah’s high school show choir performed at the open air organ pavilion, and the family went to relive old times.

So Pearl Harbor was forgotten for most of the day. But as I lowered the ensign (U.S. flag) on my hill before heading out to the Park and festivities, the significance of the day came rushing back to me.

I have written of my ensign before. I am proud of it. Raising and lowering it has become a responsibility. The hill on the back of our property is one of the higher ones in South San Diego. My ensign can be seen for several miles and has become something of a local landmark.

Almost two years ago, my responsibility surrounding the daily regimen of raising and lowering the ensign took on extra weight.

While my wife and I were out on errands, a older gentleman knocked on our door and Sarah answered. He inquired about the ensign and Sarah told him it was mine. He told her he lived down the hill and a group of his friends were thrilled with the flag and that it reminded them of Mount Suribachi. He gave her his business card.

When Sarah gave me the card, I recognized the name. Jesse Thompson has turned his home into an unofficial museum of the Great War. He and a group of remaining friends gather at his home each Wednesday to reminisce. They are all veterans of that war and most were on ships in Pearl Harbor 67 years ago.

The club’s weekly meeting and Jesse’s home has been the subject of several newspaper stories and television reports over the years. It is a much less formal gathering than the “Pearl Harbor Survivors Association,” but as many as 24 veterans of the war still show up on Wednesdays.

For those who are not aware, Mount Suribachi is the peak on Iwo Jima where the Marines raised the flag after taking the hill in fierce fighting. The event was captured by on camera by Joe Rosenthal. The photograph has become a symbol of the war in the Pacific and was the model for the famous sculpture for the USMC Marine War Memorial adjacent to Arlington National Cemetery.