Dark grey clouds like a lazing, sulking cat hung over the Mexican mountains to the south and the precipitous hills east before Mount Laguna. Before long, as it has been frequently over the last fortnight, the cat will quit lounging, stalk, and attack with fury. Rain. Ain’t like my Southwestern corner.

But the weather is fitting for this thing they are calling social distancing. The governor of California has issued an edict for all Californians to stay at home. i am obeying because a higher authority has declared i will obey. That would be my wife. So i have gone beyond “social distancing” and am now damn close to sequestering. i think i am wise enough and healthy enough to not become part of the problem, but i am also positive i do not wish to be a bad example. So, bristling as usual when someone tells me what i should do, and not really blaming Maureen, i will do what i feel is the right thing and stay home. There is some leeway for exercise and going to parks . Eventually, i decided to forego golf, even though there is enough leeway to justify making it to my Friday Morning Golf round. i didn’t go and by the time my stalwart golf buddies finished their round, we knew all the courses out here in the Southwest corner will be closed by tomorrow. And i have a hard time bucking authority, even if the order is dubious — government men and corporation men have this penchant for relying on statistics, and those statistics come from “yes men” surrounding them who have agendae of their own: believe me, i know, seen it in action, but it ain’t pretty — but that obedience has been fostered by parenting and the Navy over about fifty years. So i’m staying home for now.

On my walk before the cat clouds struck with the rain and during the governor’s speech, i thought of my little cabin, the one i’ve dreamed about for a long, long time. i am not against being alone.

In the summer of 1984, my father called me. i was with Maureen in our relatively new home in Ponte Vedra Beach, Florida. Daddy was calling to explain why he was selling the lake cabin.

The cabin had been our playground, our relaxing place, our escape for us, extended family, and friends. In the sixties, my parents and my aunt and uncle bought the cabin on one-acre of lake front property on Denny Road, which was located on Barton Creek about a mile from the Cumberland River. It was a continuous gathering place with steaks grilled by the men and the rest of the supper fixed by the women with lots and lots of iced tea with lemons and sugar long before they began to make “sweet tea,” and we all sat at the table enlarged by card tables on the kitchen and dining room side of the one-room cabin with a outhouse out the side door but with running water, a toilet, sink, and shower, and  after supper proper, the women brought out banana pudding, prune cake, pies, all kinds of pie with milk and coffee and we played games, mostly cards and board games with the kids, and we laughed and we frolicked outside, often rolling down the tiered-slope yard to the dock where there was a cool spring just off the end of the southern slip of the dock, which made you feel refreshed when you jumped or dove off the dock in the hot summer months, and we fished mostly fruitlessly off the banks and the docks and we water-skied around the largest pool of the Barton’s Creek, and Daddy would take one or two of us out to the river and troll for the striped bass, and we would plug the banks for the smallmouth bass and brother Joe would even play with the water moccasins, catching them with his hands out of the rocks piled high on the bank to prevent erosion, and we sunned on the dock, and the children and women would laze in the floats off the dock over the spring and the world was right and we didn’t know all of the nastiness, the prejudice, the hate going on in the world, and we laughed and dreamed and at night, we caught the fireflies or lightning bugs and put them in Mason jars with holes punched with an ice pick in the top and watched the sparkle in the night with the stars brimming over the heavens because there were no city lights to interfere with our vision, and we caught June bugs in the daytime and tied one leg on a string and let them fly around our heads in endless circles while we danced our young jig. And all of the world was right at the one room cabin on the lake.

But my uncle had died and the young ‘un’s moved away, and fewer people came to the cabin, and Daddy stored his boat in my aunt and uncle’s original garage for they had expanded and added another garage in the back, and my uncle was gone so my aunt lived alone with the old garage empty except for the washer and dryer and the Christmas decorations upstairs, and Daddy liked his boat there so he could go fishing somewhere else besides Barton’s Creek and Old Hickory Lake, like Percy Priest or Center Hill but he tended to the lake cabin and laid out a garden plot and grew his tomatoes. Then in ’84, he was 70 and he told his oldest son it didn’t make sense to keep the place just to mow and keep it up and tend the garden, especially when he and “Mother” were on  the road a lot in their camper. And so, he said he was selling and told me he would get $44 Thousand.

And i gulped and understood and thought hard about buying it from him. i even had dreamed about becoming the owner and living there full time. i had drawn my plan, which added a couple of bedrooms upstairs extending over the parking area and turning that into a carport or garage and enclosing the outhouse into the house and extending upward for an upstairs bathroom; i also (knowing me) included a fireplace downstairs and upstairs. i wanted to buy it from him but i wouldn’t let him give it to me even if he offered and forty-four grand was quite a figure for a lake cabin second home when i was a commander and my new bride had left her job to be with me across the country and we didn’t have a lot of extra cash and even that did not play as much as my knowing him and knowing he would not allow me to get someone to maintain the place because he wouldn’t want me to pay for that and he would do the maintenance and that was the reason he was selling it, so resignedly i nodded approval of his decision.

And then it was gone. Many years later, Daddy and i went for a ride around the county and ended up on Denny Road. He stopped on the other side of the gravel road and told me what he would have done had he kept it. It was exactly the same plan i had without the fireplaces. After all, our Castle Heights home in which the parents lived for 62 years never had a fire in the fireplace, but still, our conversation brought back my thoughts of a cabin.

i wrote a column about this lake house for the Lebanon Democrat several years ago and received an extremely nice note from Linda Garvin Everette who lives there now with her husband. She had the column and the old photo framed and her husband was thrilled. And i was even more thrilled: good place from my past for good people. 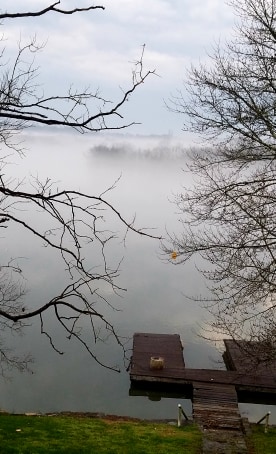 And today, Linda sent me a photo from her house looking down on the dock and the creek.  The dock, although i’m sure it has had loads of maintenance is still the same configuration as when it was our escape.

i still think about that place, but i ain’t moving out of the Southwest corner, at least for the meantime. Still, the idea of having a getaway cabin remains a dream.

This dream has been an off and on thing with many variations. When i was single, i dreamed of it being a romantic place i could take ladies and grill a steak and toss a salad and dine with wine with a cheese and sauterne after dinner moment with soft lights or better, candlelight and some classical guitar on the stereo. And then, i thought such would be for my wife and i to get away from the world and later take our kids so they could enjoy childhood on a lake like i did.

This dream morphed when i was in Watertown, New York. While i was the sports editor, i became friends with Earl Weideman, a teacher. Earl was a character, John Johnson, my friend and eventual publisher of the Watertown Daily Times who got me to come north for the job, introduced Earl and i. Earl and i ran a lot together and one weekend, we and my wife drove to one of the smaller towns on the St. Lawrence River, i’m guessing Cape Vincent. And we boarded a boat and drove out to the Thousand Island Earl’s family owned, and i fell in love with the place, not to mention i acted a bit goofy in my green Texas Boot softball jersey, which my daughter still wears around the house even though her sister Blythe was not quite yet on the way seventeen years before Sarah was born. Later in the winter, Earl drove me out there on the iced-over river in his car. i didn’t wear shorts then. And i started wanted a cabin for escaping the world again. 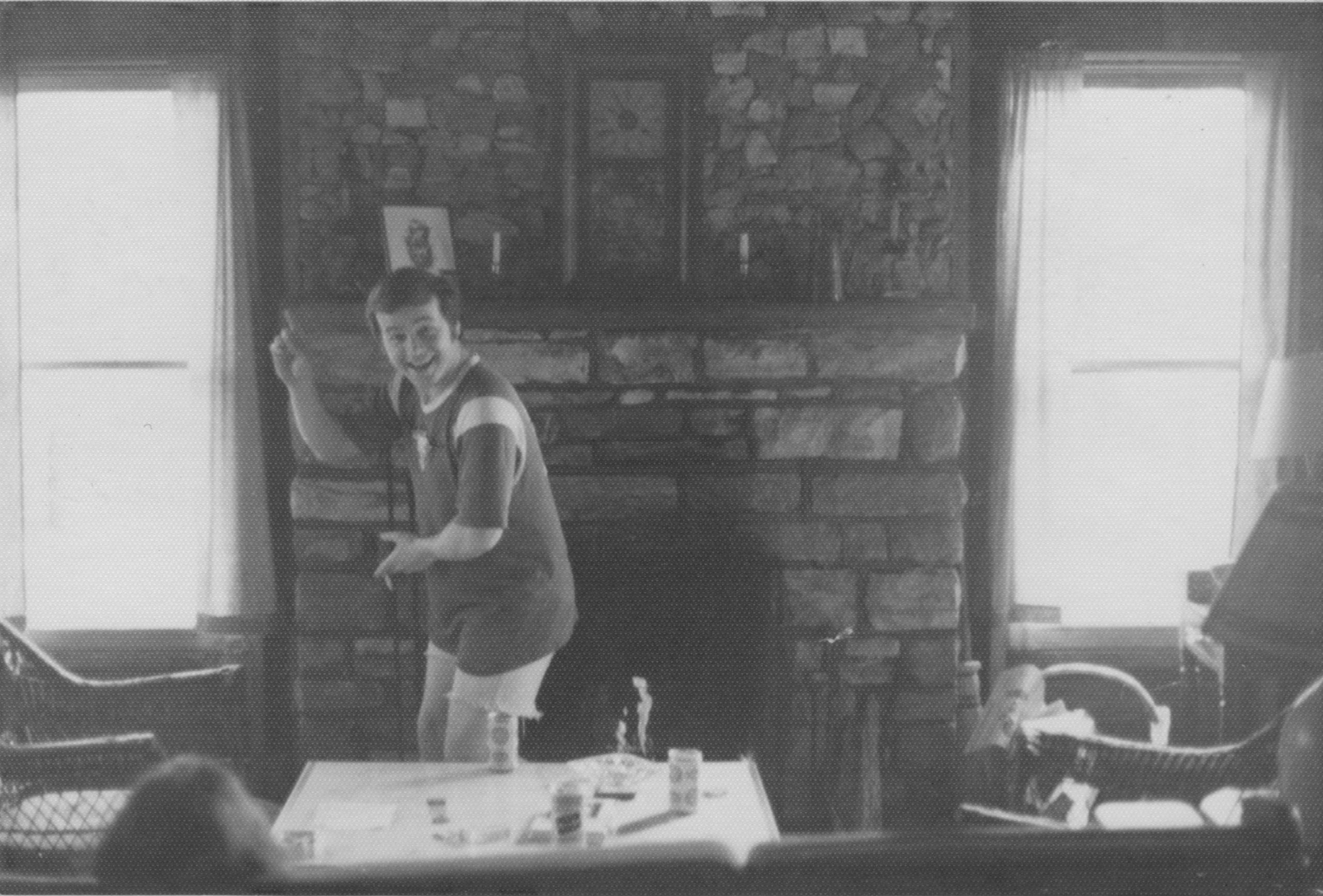 About ten years ago, Pete Toennies joined me on the last five days of a early March ski trip in Park City, Utah. It was a grand man trip. We skied daily at Deer Valley and went out for dinner each night. Stories abound. But one afternoon we were having a drink after skiing in  the bar of Deer Valley’s Snow Park Lodge. A woman began talking to us about her home, which was out in the toolies, forty acres, only accessible by horse and sleigh or snowshoes in the winter. Then we went back in September with our wives and played golf and i dreamed again of my cabin, this time in Utah.

Now when i dream, i admit it is not reality, but it’s still in my mind. i think of taking all my old, not too pretty stuff, especially for a designer wife, currently filling up my garage and getting 40 acres with a one-room cabin and a big fireplace and living like Thoreau. It doesn’t have to be Utah. There are other places, and Tennessee lakes come into my vision again, and the small mountain town of Idyllwild about ninety minutes east and up from here is attractive.

Of course at my age, medical facilities would have to be near, preferably Navy, and a couple of decent golf courses with decent green fees also would have to be accessible. Although i want the heat to be mostly from the fire in the hearth, i will need heat, and probably air conditioning and…

Ah, hell. i ‘m sequestered right now, and we don’t have or need air conditioning, and the fire in the hearth is just right, and if i want to be alone, i can go out to the garage.

So i don’t think a one-room cabin is in my future.

4 thoughts on “My Little Cabin”