Maureen had asked me what  i wanted to do for my birthday yesterday, and i made a short list, modifying it as predicted rain made modification required.

But unwavering, even with the threat of rain, we drove to Balboa Park, one of my favorite places on earth. The schedule modification dropped the zoo from our schedule. But we figured with the rain, the museums would be virtually empty.

They weren’t. We were astounded at the amount of cars in the parking areas even though it was a little less crowded than usual and disbelieving that many people would be in the park. They were.

We walked down the colonnade on the south side of the El Prado, the avenue from the large Bea Evenson fountain on the east end of the park to Plaza de Panama (a large 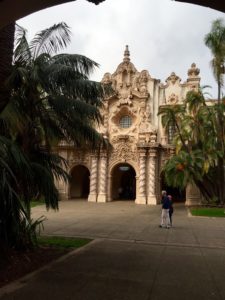 number of the park buildings were built for the 1915-1916 Panama-California Exposition) and stopped in the San Diego History Museum, one of several in the Casa de Balboa, which was featuring the structures created by  Irving Gill, a renown architect. It was our first time in that particular museum. We will go back.

Coming out, i gaped, as usual at the architecture. Across the prado was the Casa de Prado, the sister of the Casa de Balboa. The beauty of this place never ceases to make me feel good.

To get to  the San Diego Museum of Art, we continued down the colonnade to the Plaza de Panama, the center of the park. The plaza has gone through many renovations. Recently, they banned parking there and soon will reroute traffic around it . That makes me feel good. To me, the beauty of this place is in its ties to a century ago and makes the current beauty of the surroundings even more beautiful. Standing on the edge of the plaza, we are in the heart of the place. The Prado, a restaurant with an atmosphere of old charm, serves a mixture of California, Southwest, and Mexican cuisine (at least, that’s what i call it).  The patio in good weather makes me feel elegant. And the bar area with no real bar makes me think of the Long Bar at Raffles in Singapore where the Singapore Sling was invented (the original tastes like cough medicine). But before being renovated into upscale, this one was where my father-in-law, Ray Boggs liked to stop for a Beefeater’s on the rocks with a twist. Of course, i went along.

Outside the Prado where we were yesterday, we were a stone throw away from the Japanese Gardens, the Mingei Museum dedicated to folk art and craft, The Timken Museum featuring classical paintings, the Lily pond, and on and on.

It is a gathering place for all kinds of folks, families, just a place to relax. Beautiful.

On the north end of the plaza is my favorite, the San Diego Museum of Art. It was the reason i wanted to include the park in my birthday. In particular, i wanted to see the “Visible Vaults” exhibition. The museum has made it possible to experience the many, many works of art that has been in the archives, not available for viewing. The collection is astounding. With every piece displayed and with every drawer upon drawer Maureen and i examined, i thought of two people: my daughter Blythe and my friend Maren Hicks. i knew they would understand more and consequently enjoy more than me this treasure.

Our final stop in Balboa Park was at the Museum of Man. i had not been there for a score of years, and i remember being fascinated by the exhibits. It has been upgraded and is now very children friendly. In fact, Maureen and i kept laughing at how our grandson Sam and other boys between six and seventy-three would enjoy some exhibits. They had a special “cannibal” exhibit, there was the evolution of man exhibit, and the Egyptian exhibit featured mummies. For the older guys, there was the “Beerology” exhibit. Maureen and i laughed at a number of ancient civilizations which drank as much as four gallons of beer a day, especially the ones in Peru which practiced shrinking heads.

The Egyptian exhibit had a mummy not of that civilization. The “Lemon Grove Mummy” was that of a young woman and a child curled into a fetal position. She was the one that captivated me those many years ago. She got her name because two San Diego teenagers stole her from a cave near Chihuahua, Mexico in 1966. Getting home, they became afraid of what their parents would do if they knew and stored the mummy in a box in a friend’s garage. Shortly afterwards, they were sent to serve in Vietnam. They and the mummy became separated. In 1980, the mother of the friend was cleaning out her garage when she found the mummy (i’m still trying to imagine her moment of discovery) and donated it to the museum.

Somehow, i connected the mummy to some old destroyers. In 1974, they had been taken out of mothballs and were moored on the quay wall of the Long Beach Naval Station,  just aft of the U.S.S. Hollister, on which i was the chief engineer. When we found out the destroyers were to be used as targets for missiles and sunk on the Pacific Missile Test Range, we went aboard to salvage any supplies we could use. i also acquired a magnetic compass, an engine order telegraph unit, and a brass plate off a main feed pump of one destroyer. The brass plate is a paper weight in my office, the compass is part of Maureen’s arrangement including a metal cruise box, cacti, and orchids on the stoop of our courtyard porch.

But i saw a relationship between those ships and the mummy. That’s when i wrote this poem:

Thoughts about the discovery of the well-preserved and very old remains of an Incan boy and young woman high in the Andes Mountains of Peru, circa 1995

the magazine photos riveted attention, fascination:
children, forced to grow up and die
before their time in our time
yet probably not a great deal more
than their time in their time.
did they volunteer to the sacrifice?
now they are a source of interest in ages past,
and macabre beliefs:
i only feel sadness.

hulks.
dead, empty hulks.
eyeless sockets staring out
into a world gone techno,
not a great deal more advanced from
what they saw when they could see:
world still full of ignorance, hatred and religious zealots
out to rid the world of all other gods.
the hulks,
not just dead, but dead and gone, yet not gone,
still here, rediscovered,
creating fascination, ghoulish interest in such relics.

hulk: dead warship lady
i wandered through during my navy days
hulk.
lady warship “mothballed” with foam
until cleaned up for her sacrifice,
i, sailor man, entered the hulk,
semi-official equipment scavenger
for my man-of-war, pronounced female,
herself already obsolescent:
aboard: quiet and eerie,
a presence here beyond me felt:
an old unfinished letter,
desk drawer of a small stateroom forward,
“Dear Clara,” was the only identification;
nothing much more than the opening hello;
no great heroics here,
just a khaki clad lieutenant
meeting obligations to clara.

down below in the steel machine guts of the lady,
the clang against the emptiness of fireroom ladders,
once filled with hiss and heat and screams over the blowers
stirring the moist heat to just above tolerable.
it was more incan.
i could see the sailors shirtless sweating,
changing spray nozzles as the orders from above
required they rev up the steaming to where
the sides of the boilers heaved.
gone.
just as gone as the incans.
eye sockets empty,
bodily fluids extracted or dried up long ago.
sacrificed,
but no petrification here.
no, she will be hauled to sea
to feel the heat of missiles,
practicing the art of war,
slamming into her innards
as her body is twisted, rent asunder,
gaping holes filling with the briny sea
as she slides, stem down
into deep bliss.
sacrificed like the incans,
dead and gone,
but no longer seen
like the incans.

at least the old war lady
will have some peace and quiet.

After leaving the museum, we departed the park and drove to The Rose in South Park. The Rose is a special place for us and it seems we spend a number of our special days there: light dinners and good wine. Yesterday, it did not  disappoint.

The rain had been kind to me, stopping in the late morning before resuming after nightfall, a break just for our trip. In fact, it rested until i brought in an ample amount of firewood.

The television was not turned on until i went to bed. i sat by the fire and read in silence. Maureen was stretched out in the love seat across the rug with the two cats asleep on her legs.

Not a bad day.

1 thought on “Mummies and me”