With all of the craziness going on, it’s easy to forget what is going to be here Thursday. Ours has been even crazier in that when Maureen felt ill last week, the three of us went and were tested for COVID. It took a couple of days before our results came back negative. i was dreading two weeks, which some time ago, i had heard was the length for getting the results. But even four days can change your idea about self-quarantining. Still, we stuck to it because we simply did not want to endanger anyone else even if there was only a slight chance we would be doing so. Crazy.

But we, especially moi, didn’t forget. i like Thanksgiving, the whole idea, regardless of which history to which you subscribe about its beginnings or how your celebration might differ from others. It is still about giving thanks. So i’m going back and posting some past thoughts about Thanksgiving. This one was written during the 2016 Thanksgiving week.

Have a wonderful turkey day…and give thanks.

Note: the photo below was taken that Thanksgiving.

Christmas is the big family deal. Several of mine have been away from family. Navy, you know.

But i’ve pretty much blown the roof off when it comes to missing Thanksgiving with the family. Actually, it’s not that much. i have spent six Thanksgivings with shipmates either at sea or in some foreign port where whatever Thanksgiving there is is celebrated is on-board.

They were okay. Bittersweet and oh so lonely amongst my Navy friends, but okay.

There also have been about four or five where the celebrating has been with just my wife. This duo celebration seems to have increased in the last decade. That happens when you live in the Southwest corner and are growing older. i have found these to be almost as nice as the ones with large groups of family and friends. After all, i can be happy anytime i am spending time with just Maureen.

i like Thanksgiving. It is not an absolutely silly requirement to honor someone when we should be honoring those people all of the time, like Valentine’s Day, Mother’s Day, Father’s Day, President’s Day, Neighbor Day, Sibling Day, Fifth Cousin Day, Trash Man Day, and Lord knows what other group day. Thanksgiving doesn’t have the somber celebratory tone of Easter. It is not one of those national things we have hyped up to give everyone free time to play instead of work on Fridays or Mondays. It is not celebrating the birth of our nation like the Fourth, or honoring those who served like Memorial Day or Veterans Day.

It is not like Halloween, which has become sort of weird party for the kids to get all of the things they shouldn’t eat and now get them at some school or church instead of hitting all of the homes gone gonzo decorative with tombstones and bones of body parts sticking out of the yard — has the number of kids stopping by your house for “trick or treat” dwindled to a handful like it has at ours? — Still Halloween is fun for the kids and the kids in us so i’m okay with it.

And it’s not like Christmas, the big daddy of them all. Celebrating the birth of a savior, having as many family together as possible, waiting for the gift openings, hoping for snow, singing carols, giving each other more than just presents. Yeh, that one is special.

Thanksgiving is one i really like as well. It has morphed into a thing of itself from those pilgrims and indigenous folks getting together to thank each other (what a concept, huh?) with a big meal. Thus far, it hasn’t reach the massive ad campaign of just about every other holiday. There’s this appreciation factor that may be in the other celebrations but seems to get lost.

My favorite Thanksgivings runs the gamut of different settings.

One away from home that sticks in my mind is the one in Seoul, Korean, 1970. i was with Blythe’s mother’s family in their comfortable senior officer housing on base. The Lynch’s were always great at throwing parties and this one sticks out. We got up at some ungodly hour in the middle of the night to watch the Texas, Texas A&M football game. Blythe’s mother and i weren’t even engaged yet. The Lynch’s were allowing me respite from my cycle of carrying Korean troops back and forth between Pusan and Vietnam.

Then there was the one in Naples, 1972. In August, i had returned to active duty and flown to meet my new ship, the USS Stephen B. Luce (DLG 7) a month after Blythe was born. i don’t even remember the onboard celebration, but i do remember the loneliness when i called from the Naples base phone exchange and talked to wife and family. There’s not many things more lonely that hanging up a phone late on Thanksgiving night after talking to the mother of your infant daughter.

Then, there was the one on Yosemite. Man, that was a some feast. We were anchored off of Masirah, Oman (a total of 55 days at sea). Our supply department did us up fine. We even had that Martinelli’s sparkling cider (white) and apple-grape (red) instead of wine. That wardroom of forty-four officers celebrated just like we were family…because we were.

Then there were the quiet ones with Maureen. We always picked one of our favorite restaurants. And we thanked each other for being each other and together. Doesn’t get much more thankful than that.

The Tennessee Thanksgivings will remain special in my memory. They were in all of the places of family. There were those at our house. The old folks and the older children were crammed around the dining room table. Before the family room had been added, the younger kids ate on a card table in the breakfast niche, then later at the oak table in the breakfast room. The womenfolk cooked like there was no tomorrow and it was all good.

Then there was the same going-ons when we held our celebration at the Hall’s home on Wildwood and later Waggoner. We would go to Red Bank in Chattanooga where the Orr’s hosted the feast of Prichard women, almost like the two in Lebanon, but quite a bit larger (we all sat at the dining room table) and a bit more elegant. Then on numerous Thanksgivings, we would travel to Rockwood to be with Mama Orr. It was an incredibly fascinating Victorian labyrinth of a home with a downhill across the street where we would find large pieces of cardboard and slide down (or without cardboard simply roll and roll and roll down that hill.

But far and away, there was one Thanksgiving i love the most. Here. The Southwest corner. 2007. Sam was seven months old. His first Thanksgiving. My family was together. Maureen’s sister and her family joined us. i smoked a turkey. It was a warm and dry day, not the full-blown beyond hot and dry today, but nice. Our family was together. That was enough.

Later today, we will drive over the bay bridge to Coronado. We will celebrate with Pete and Nancy Toennies and their family. After all, we are about as close to family with the Toennies as anyone can get.

It will be a nice way to give thanks.

i hope everyone i know has a wonderful Thanksgiving in their own way. i hope all of us will stop for just a minute. Not watching football. Not eating a ton of turkey. . Not pontificating about the state of the world and our country. Just pausing to give thanks for what we have had and what we have. 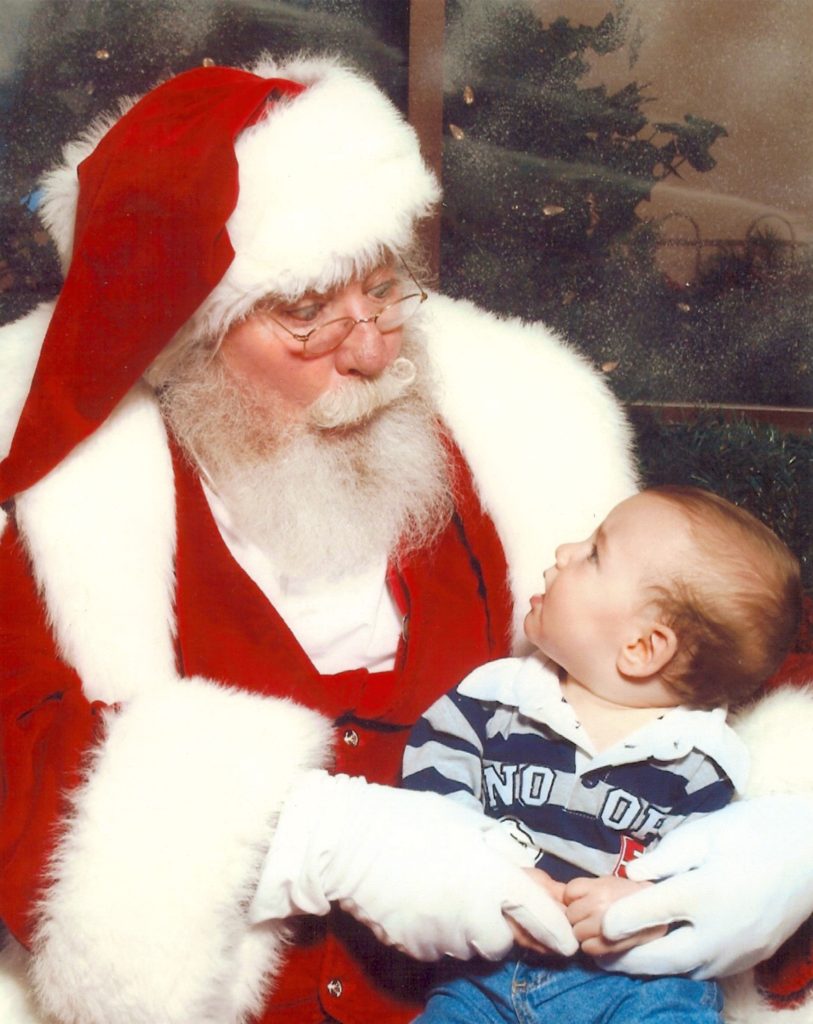