At the end of this evening, we will have been hunkered down for three weeks, 21 days. Maureen beats me by a day because i attended a wonderful Saint Patrick’s day party two Saturdays ago. It was a fabulous evening at Rod and Joann Stark’s home with incredible Irish cuisine. i even backed up Rod in singing “My Wild Colonial Boy” in the sing along, something i ordinarily am loath to do. 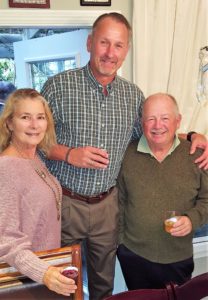 i also discovered how short i really am, although Mark Shults is only a foot taller than me and in this photo it looks like he is at least two feet taller and Edie eclipses me by quite a bit as well. i think i was standing in a hole. Mark, by the way, is one of the nicer guys i know and Edie is an absolute marvel

But that was three weeks ago and i don’t have anyone to measure my height against tonight. It is approaching ten night time. i am alone. It ain’t late by old standards, but Maureen and Sarah have retired to their bedrooms. i will follow Maureen shortly. But right now, i’m reflecting.

But there is a lot of time. Tonight, the three of us sort of agreed to watch a movie together. Sarah suggested “Galaxy Quest.” Maureen and i agreed that would be a good choice, but ole cantankerous me thought Sarah might enjoy a brillant movie from the past. i started searching and could not find it anywhere until i  ran across it on line.

i think Mel Brooks’ “Silent Movie” is perhaps the most ingenious, craft perfect, sophisticated comedy he made among my many favorites like “Young Frankenstein,” “Blazing Saddles,” and “The Producers,” among others (i also think “The Twelve Chairs” is an extraordinary comment about us). But “Silent Movie” is not only funny. It’s brilliant in its salute and parody of the silent film era, and it captures so many human foibles in the context of this thing we call living with absolutely no, no concern for political correctness. In fact, it flaunts political correctness in your face.

So i did this magic “airtime” thing between my laptop and the television, Voila. “Silent Movie” appears. Maureen watches for a while and laughs. But she has agreed to participate in a “Zoom” meditation thing with her yoga instructor and leaves right after Brooks, Dom Deluise and Marty Feldman recruit Burt Reynolds for the silent movie. Sarah, although not admitting it, gets bored, washes  her half of the supper dishes and disappears. Maureen comes back from meditating and laughs again. Then, she too retires.

i was again mesmerized. And it seems i am a loner…again. Lord, i love the brilliance of Mel Brooks with “Silent Movie.”

So then, i finish up the dishes. But i find some nostalgic music for me while i become the dishwashing man. First, it was the Temptations’ “My Girl,” and man, i wandered around in melancholy with suds and the pots and pans. Then i conjured up Smokey Robinson and the Miracles with “Tracks of My Tears” and all of my lost loves appeared on the window above the sink. i explored again and produced Lenny Welch’s “Since I Fell for You,” and the young man angst of losing out on love flowed over me as i dried and stored the dishes. Finally, Sam Cooke and i sang “You Send Me,” and i was a young man in another world of the unknown ahead.

So i will sleep now. The world is locked in. i am actually okay because i have two of my most precious loves here with me and i know the others are safe.