We sat there, quiet mostly, arriving early as is our habit nowadays.

The bar, by the front window, was full and a little loud, but they sat us all the way back of the dining area in a corner. Perhaps it was because i had mentioned it was our anniversary. Only a table of six in the center and a couple near the bar were with us.

The restaurant is named Et Voilà! French Bistro. It is French. They import their bread from Paris. The owners came from France. The atmosphere is perfect, perfect for an anniversary, and unknown to us, Tuesday was “date night,” a three-course pre fixe meal for two including a bottle of wine, from France usually.

Maureen chose the salad de poires and the saumon d’écosse, pesto tomate et basilic. i also chose the salad, shying away from the escargots å l’ail et patis in consideration of my main course, moules marinière. We shared our desserts of melba à la fraise, and profiterolles with our bottle of Ch. du Grand Caumont ’13. It took me a while to write this out, and i ordered by pointing. Maureen spoke her fluent French. And neither of us or the restaurant are pretentious. The black tee shirt worn by the servers had the “EV” logo on the front, and the back read, “Et Voilà: Don’t be embarrassed; we can’t pronounce it either.

And it was good. i mean good.

i was struck as we spent a significant portion of our time there remembering previous anniversary dinners. Our first was in Jacksonville. The restaurant is gone now. It was where, while we waited for our table sitting in the foyer, my head began to  itch. i asked Maureen to check it out. A tick had fallen from the foyer vegetation and was beginning to dig into my scalp. Maureen picked it out. We laughed, she her legendary laugh, and talked of how we looked like the orangutans at the San Diego Zoo. We never went back.

Then there was Silas St. John’s, one of our favorites, twice. It too has gone, and on and on we went. And i’m thinking thirty-six years is a long time and memories are good and what folks my age do.

i suspect we will go back there next year. And maybe even several other times for date night. 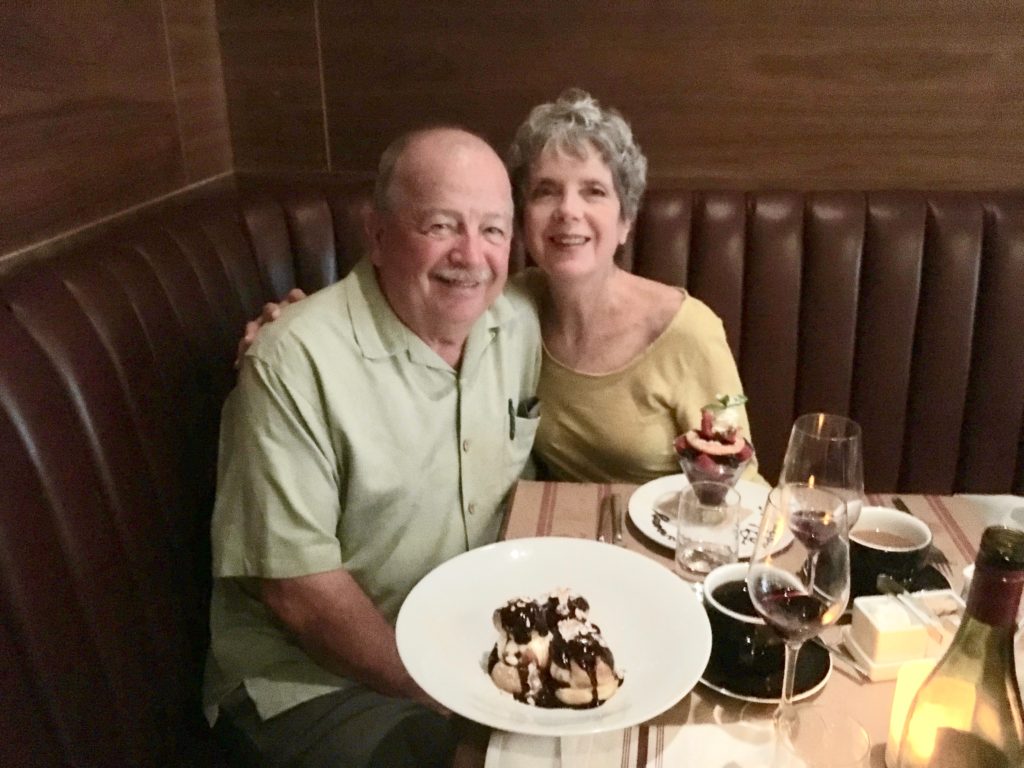 3 thoughts on “Just One of Thirty-Six”