i began this last Sunday. But we changed our schedule and drove north for the Independence Day parade in Sonoma with our good friends, Alan and Maren Hicks. The driving was a mix of bad (Los Angeles and San Jose) and good (the rest of it). The stop in Paso Robles was enchanting and the Hick’s remodeled home is even better than the original i loved.

The Fourth of July is always very poignant for me because it is symbolic of our freedom and quest for equality, no matter how many times we stumble backward in that quest. Hopefully, i will post some more comments on  the travel, our wonderful time here, and Independence Day. For now, i wish to express joy and sadness about families close.

i’ve been intending to write something about a significant family loss last week. But i found it difficult and kept putting it off. Couldn’t find the words. Perhaps it was because i wanted so much to travel to North Carolina to honor her with my presence.

She was my cousin, one of the three daughters of Jesse and Alice Jewell. They took care of me when needed from my birth until i was six or seven. Myrtle and Joann got me into high school plays as the little kid. Shirley was the anointed “baby sitter.” But they all, including Aunt Alice made sure i was okay, which was sometimes tough like when i locked myself in their bathroom on what i remember as Wilson Street, a block or two northeast of the old Lebanon High School football stadium. Shirley had to crawl through the high window above the tub to rescue me. It remains a family legend of Shirley’s rescue and my…er, not so smart move.

As things happen, especially with Jewell men, the close knit family of five brothers and two sisters wandered apart as they married women who were close to their own families. One, Aunt Virda, died in her twenties. Wesley and his wife Barbara moved west seeking better living. Uncle Jesse, Aunt Naomi (known as “Aunt Noni” in the family) and her husband Uncle George stayed close. Uncle Jesse, the plumber, and Uncle George, the electrician, teamed with my father Jimmy to fish and boat on the river together. But they too went their own ways with employment and family.

They remained close. Their families though remote remained close as well with the center of that closeness being my parents and Uncle Huffman, the youngest of the siblings, and his wife Aunt Louise who remained in Lebanon, the family home.

The two older sisters of Uncle Jesse, Myrtle and Joann each married members of the Lumbee tribe, a Carolina tribe with origins from the Tuscarora, Siouan, and Algonquian Native Americans. Then the Jimmy Jewell children got itchy feet. Sister Martha moved to Colorado, then New Mexico, and then back to Chattanooga. Brother Joe went to New England and stayed there. The oldest, some goofy guy, smelled newsprint and the sea and ended up in the Southwest corner.  The next generations splattered across the country: California, Florida, Vermont, Boston, Arkansas, and North Carolina. i’m sure there are some of those next generations in other states as well.

i sometimes wonder what Mama and Grandpa Jewell would have thought of this had it been possible to project the future when they moved from the hamlet of Statesville to Lebanon in 1898.

Joann Jewell Jacobs passed away in Charlotte, North Carolina almost two weeks ago after a long battle with dementia. She was one of the most beautiful women i have ever known inside and out. She remained close. Joann and her daughter Jamie were one of the last Jewell family members to be with my father, visiting him and my mother the day before he passed away five years ago. From that moment, i kept planning to go see her, but failed. i regret that.

Virda left us in the 1920’s. Grandfather Hiram Culley departed in the late 1930’s. Mama Jewell passed away in the early 1950’s. Of the next generation only Aunt Louis remains with us. Jesse, Alice, Wesley, Barbara, Naomi, George, Huffman, Jimmy, and Estelle are gone. Uncle Jesse and Aunt Alice’s daughters have joined them. The daughters’ generation, including me, is slowly moving on, slimming down the numbers.

But there are others like Jamie and Jewell and Lori and Kelley who still hold that Jewell family closeness in their souls. i can feel it.

i don’t think i can express it better than this photo with Joann, Jamie, Jimmy, and Estelle a couple of years before their last visit. 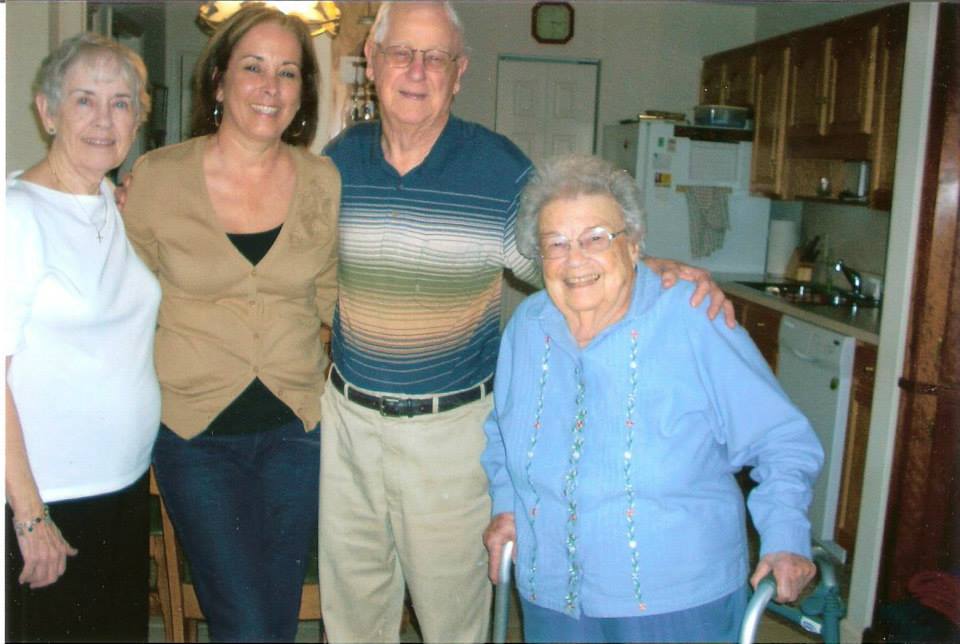 2 thoughts on “Jewell’s, a Family”