The past week has been rather busy for an old man. We are redoing the front (bonus) room. It has been Maureen’s arts, crafts, and work room. Now it will be the same, just glorious.

This renovation, of course, put me in the high gear of puttering: painting, sanding, erecting shelves, wall mounting a television, and then, even being electronically challenged, dealing with hooking the damn thing up to the cable, DVD, etc. All of this also meant my space in the garage has been filled with the old front room contents, and my car was required to remain in the driveway. i don’t even like a garage in the front of the house, much less having to leave a car, my car in the driveway.

About a week before this all began, our neighbor, Terri Dillon, without knowing it, tempted me greatly.

Terri is an extremely successful, knowledgeable, and beyond competent real estate broker. She is also a very nice person and an animal lover. A little while ago, Terri became involved with “Dog Fur Days.” This non-profit is dedicated to finding dogs in shelters, assigning them to volunteer foster homes, and then searching for new owners. Terri is a volunteer. As usual, she is very successful in her volunteer work.

Just shy of two weeks ago, i was going out to my car, parked in the driveway. Terri was coming down to retrieve her mail. The shared mailbox for eight homes is next to our driveway. Terri had three labrador mix puppies bounding around her. She told us about how much she enjoyed them, and Maureen and i played with the two males and one female. When Terri returned home, the puppies bounded all over the place but generally found their way back to Terri’s home.

i told Maureen had there just been two pups i might have argued strongly for us adopting them. But there were three, and i just couldn’t take two and leave the other one for someone else. Plus, i vowed i wouldn’t have another dog after putting our last one, Lena, down until i was sure the dog would outlive me. i don’t want to have to do that again.

i’m not quite sure i’m at that point yet, but i’m getting close. Eventually, i will have another dog. i hope he’s like my Cass, my labrador who was more my best friend than my dog.

So we didn’t bring it up, this puppy adoption thing, to Terri. She kept us up to date, and soon those three beautiful puppies were adopted.

Then in the middle of the craziness of renovation, Terri sends me a message. She has another foster pup. This time, just one. She decided to name it “Jewell” after me. i was honored.

Then yesterday, Terri and i met again at the mailbox. She had brought Jewell along to meet her namesake. She was small and cute as a button. She was also a little shy, but boy, she could make you giggle just like a puppy should.

Today, Terri sent me another message. Jewell has been adopted. 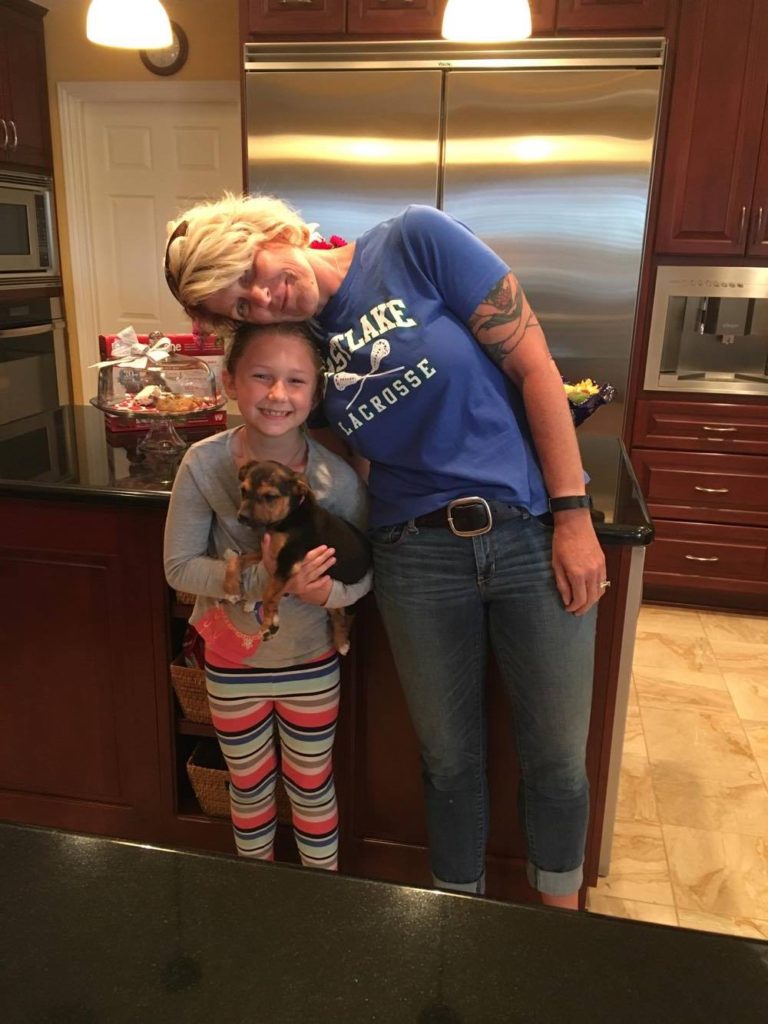 Now that makes me happy. Jewell has a good home and i won’t be tempted…until, of course, Terri and i meet at the mailbox again.

1 thought on “Jewell…the puppy, not me really”