This old irascible curmudgeon was rolling into his “Bah, humbug” phase of Christmas. It happens about this time of year every year.

For reasons beyond his control, he has had this phase for about oh, say for about a half a century. It occurs when he realizes he yet again won’t be spending Christmas with someone whom he holds very dear.

Up until he left his hometown to wander (and wander he has, although nearly all of it was not planned; it just turned out that way), he spent Christmas with his family: his parents, his brother and sister, family in Lebanon and Chattanooga (Joe, Martha, Nancy, all of the Prichard’s, did they ever go to Florida for Christmas? He can’t recall although their is some vague memory of a warm Christmas in Daytona, perhaps another one of his illusions).

Then life and the world outside of our hamlet smack dab in the middle of Tennessee began to take him away. Several Christmases were spent away, far away completely out of his control: Cam Rahn Bay, Vietnam; Hong Kong; Diego Garcia to name a few. The military can do that to you. Then there was this marriage thing and Christmases inevitably was divided between families. Then there were three families geographically separated (divorces and remarrying can do that, you know).

And that’s where it really started. When the world and life takes one away from the perfect Christmas. That was 1979. It was the first Christmas of not being with his daughter Blythe. Christmas has never been the same since then. That old humbug phase has been there ever since.

The closest he has ever gotten to that perfect Christmas began in 1992 when Maureen, three-year old Sarah and he went back to Tennessee, Signal Mountain most of the time, to be with his parents and his sister’s family. The Duffs have become his Christmas, and even though he is missing a daughter, a grandson, his brother and his family, and his wife’s family, it has been a beautiful Christmas every year.

Still that sadness is there as he has had to make choices about with whom he  spent Christmas, or rather who he misses at Christmas.

When they first started going to Tennessee again in 1992, he had family and friends housekeep for him and there was an abbreviated version of Christmas with Maureen’s family before they left. Even though the Southwest corner family still gets together for an early, abbreviated Christmas, the housesitting has evolved into someone looking after the pets on a daily basis. In those early years, they continued to decorate to the fullest although the tree was dry and crumbly by the time they returned. When the housekeeping stopped, they stopped the decorating. This was about when he created the legendary “NOEL” sign.

About four Christmases ago after Sarah moved to Texas, Maureen and he missed their house being Christmasy and bought a fake tree, something he vowed he would never do. So they decorated the tree, put up a minimal number of other decorations and of course, the “NOEL” sign.

But this year, Sarah is back home for a brief period. You get two sentimental and caring women together and you are going to have Christmas decorations, full-blown.

This year, they do.

No, he still won’t have that perfect Christmas. He will not be with his other daughter Blythe and his grandson Sam (and yeh, you too, Jason). It’s been a decision he has made every Christmas except one, trying to do what was best for everyone of his family he loves. Sometimes, you just have to bite the bullet and do the right thing. He has bitten quite a few bullets in his day.

But this year, it’s a bit different, this curmudgeon humbug thing. The women decorated.He put Christmas music on the iPod and plays it frequently. It not only is beginning to look a lot Christmas, it’s beginning to sound that way as well.

The old curmudgeon humbug sort of got into the spirit. You know, the reason for Christmas, for joy to the world, for hope, for caring and giving., for children, and birth, and that star.

Yep, it’s beginning to look a lot like Christmas: 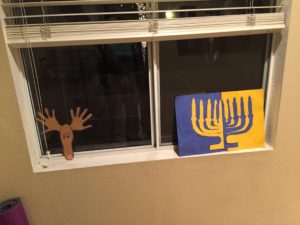 It is the season and the menorah is something Sarah made in elementary school. A Jewish family came to our Christmas party. The girl was a friend of Sarah’s. The wife was very thankful for us having that menorah card in our decoration. The reindeer was also made by Sarah a long time ago. 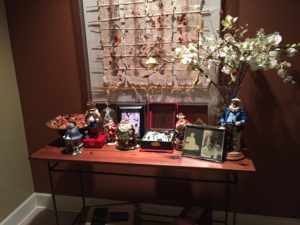 Then there are the music boxes Sarah has received from her aunt almost every Christmas. These are on the table in the alcove between the family room and the dining room. 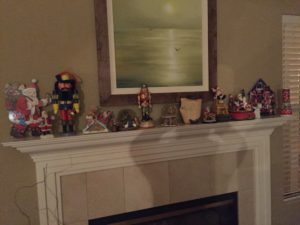 These music boxes and the nutcracker are on the living room mantel. 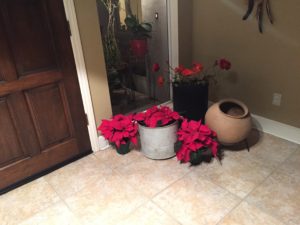 These poinsettias in the entry are ones Maureen couldn’t resist. She had made me throw away the fake ones i got from Home Depot several years ago for five dollars. Oh okay, mine were quite a bit worn and they did look fake, but other than that they were fine. 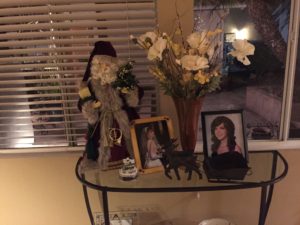 That’s Santa and a bit undersized reindeer with a sled for Santa who won’t fit, but it holds Christmas cards nicely on our “daughter” table. 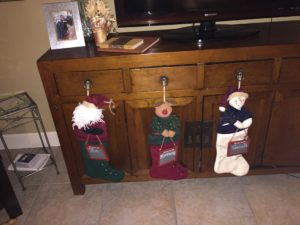 Then we have our stockings, acquired as a gift several years ago. 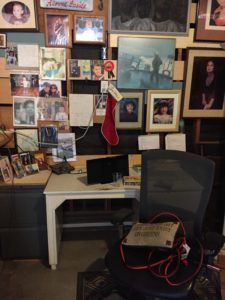 This has removed my stocking, which my mother made me about seventy years ago, from the in-house decorations. So i moved it to my work (hah, hah) space in my garage. i actually really like it here. i know Martha’s is in her home on Signal Mountain, and i wonder where Joe’s is in Vermont. 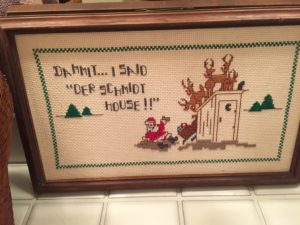 A cross-stitch is in the guest bath so we can relate the legendary Jewell-Hall story about why it is so…well, legendary.

Almost finally, there is the tree. With the fake one, we have options. i turn on the colored lights in the morning to welcome the wakers with a good feeling. In the evening, we turn on the white lights to add to the family room’s Christmasy atmosphere, also abetted by the fire…which is not fake. 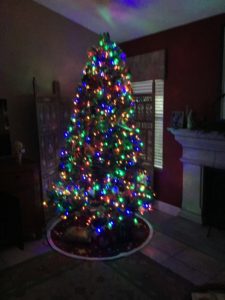 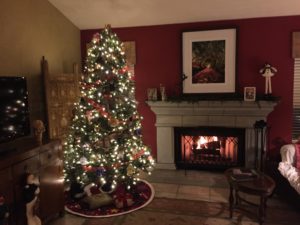 The coup de gras is the “NOEL” sign, which after countless hours of wire cutting, splicing, soldering, and hair pulling (if i had hair). After completing then hanging of the sign, i hung it up and turned it on. The two light strings illuminating the letters are, we discovered two different whites. The “warm” whites are whiter than the clear whites. But i ain’t changing it out again this year. Maybe next. Meanwhile, the legend grows. 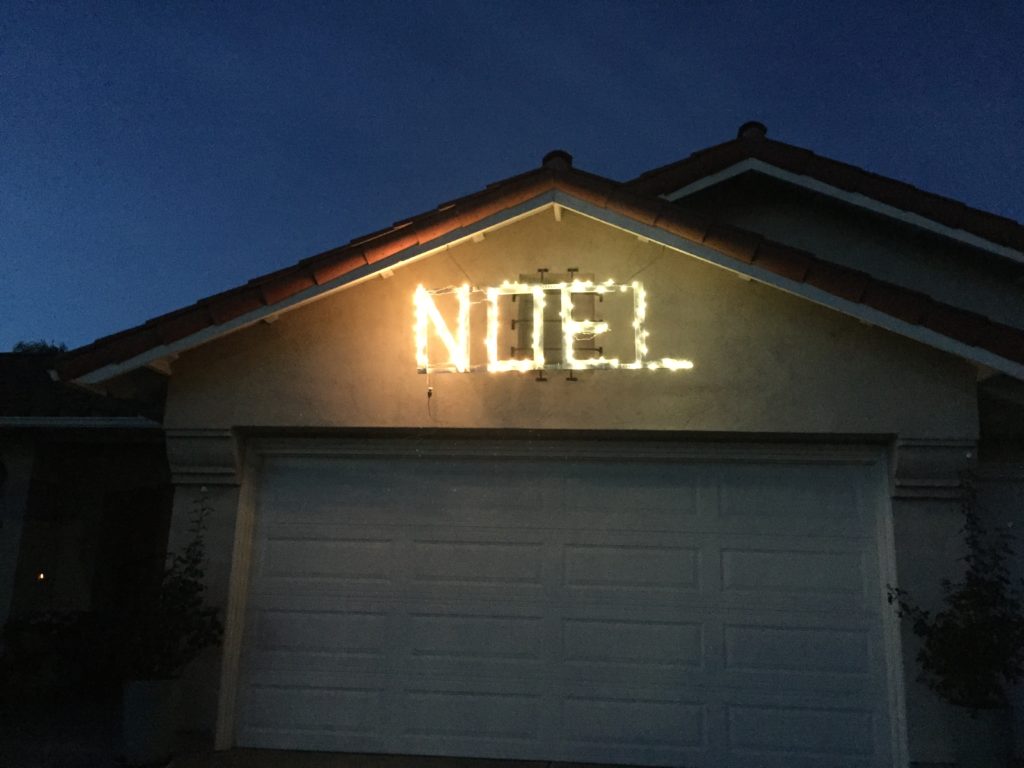 And all of this is really to say very few people have a “perfect” Christmas. Sadly, some people have dark ones because they are alone. But everyone, if they try, can get into the spirit, the real meaning of Christmas, and rejoice. Even this old curmudgeon humbug can have a merry Christmas.

May yours be especially wonderful this year.