It was a morning after two rounds of Friday golf. i  played with my group of curmudgeons as usual; had a beer and lunch, and then joined my Pacific Tugboat friends for the Propeller Club tournament (the Propeller Club is an association of businesses dedicated to supporting all things concerning the well-being of San Diego Bay).

So when i woke up, i was not particularly energetic. Thirty-six holes of golf are now pretty demanding for this old man. But what the heck?

So for a change, i woke up second. Whoever wakes up second naturally makes the bed. That is when i had my first morning encounter with our indoor cats.

i like cats. However, i’m not too keen on indoor cats. My older daughter Blythe has had indoor/outdoor cats all of her life. Up until these two, all of my cats were indoor/outdoor. i think they should do their natural thing. But in our neck of the woods in the Southwest corner (okay, okay, our neck doesn’t really have woods, just high desert weeds and low-lying acacia, usually thorny, and not fun in the ten months of dry).

But my younger daughter Sarah got a kitten while she shared a house with other college friends. We had given up on outdoor cats because we had lost four to the snakes, owls, bobcats, hawks, foxes, falcons, and coyotes in the open space surrounding our home.

Sarah moved back home for her last two years at San Diego state, bringing that cat with her, the indoor cat named Dakota who had no desire to go outside after a mad dash into Halloween stormy weather for more than two weeks at the SDSU house. She was a sweet domestic cat, unlike most cats i’ve known.

Sarah recognized her mother was a fanatic cat lover. So when she began packing for her move to Austin,  she went and acquired another cat named over arguments about what to name this black and white tom from “BW” to “Bruce Willis” to the common referral to him as “Bruce” (me) and “Brucie” (Maureen).

To complicate things , Sarah couldn’t take Dakota to Austin. She moved into her sister Blythe’s home shared by Jason, Sam, two dogs, and at least two outdoor cats. They all recognized an indoor cat was implausible in such an evironment.

So, the Southwest corner Jewell’s ended up with two indoor cats.

It’s not all that bad since i remembered to always close the door. They are entertaining. 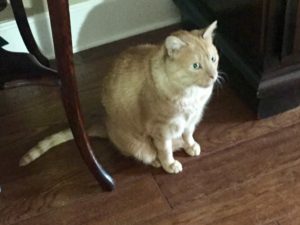 For example, when i began making the bed this morning, i heard a slight noise and turned around to see Dakota.

She was waiting patiently but anxiously for me to finish making that bed. You see, that bed is her solace, her safe place for the majority of the day.

Since there is a lot of cat hair involved with sleeping on our bed and Dakota prefers to burrow, Maureen created a cat pad, old sheet haven for the princess.

So after i finished the bed and completed a couple of other chores, i returned to our 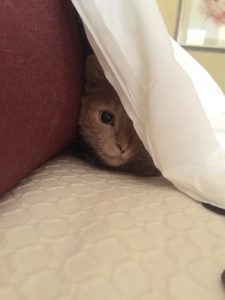 bedroom and found Dakota in her usual spot.

She is there every day as soon as her haven is prepared properly. In the afternoon, she comes out and lays on Maureen’s lap while Maureen is reading and continues this practice through the evening. Occasionally, very occasionally, she will do something radical and jump up on my lap while i’m watching a baseball game or reading.

But the bed, under that old sheet is her place. She even looks a bit cross if i sneak my phone nearby to take a photograph. i mean that spot is hers. Hers. Period.

Then we have Bruce. He will eventually wander into Dakota’s lair and being careful not to

disturb the princess, will lay on top of the pillows for a brief rest. But in the morning, he is bouncing off walls, demanding to play, drinking out of the kitchen faucet, letting us know his needs with a few well-placed meows.

As i said, i’m not particularly fond of the idea of indoor cats. But i’ve grown attached to these two.

And in the morning, especially mornings when i’ve done something old man stupid like playing two rounds of golf the previous day. i can stiffly move about until i experience these two indoor cats. Then, they make me smile. My day starts on a good note.