Half of today’s San Diego Union-Tribune’s front sports page — actually relegated to the back page of the business section in these troubled times when there’s not enough sports to warrant more — is taken up by a photo of Tom Dempsey. The photo shows Dempsey, who was born with half of his right foot missing, in the split second before kicking a 63-yard field goal in November 1970, allowing the New Orleans Saints to beat the Detroit Lions, 19-17. That field goal not only won the game, it remained on the record books as the longest for 43 years.

The story was there because Dempsey sadly passed away at 73 due to contracting covid-19 in the retirement home in New Orleans. He was suffering from dementia. He is one of 15 residents to die from the scourge. Sad.

i did not watch that game. i heard about the kick about a week later while i was on the USNS Upshur (T-AP 198) carting ROK troops to and from Vietnam. Yet, Dempsey had long been one of my heroes, especially overcoming such a disability to become a football hero.

On the second page of the sports abbreviated section, i perused the daily item called “Digest,” which gives summaries of sports related events not covered elsewhere. The first item today was about another loss.

Bobby Mitchell passed away at 84.

Oh, did that make me sad and took me back into the finest moments of my football watching. Mitchell was best known as a receiver for the Washington Redskins. He was inducted into the NFL Hall of Fame in 1983. i thought he was incredible for his performance as a Redskin. But i recalled him from earlier days.

You see, in the 1950’s i was a Cleveland Brown fan. i rooted for Otto Graham and Dante Lavelli, but my real hero was Lou Groza, the formidable tackle and extraordinary place kicker. Graham retired in ’55; Lavelli followed in ’56.

Then, came my time to be amazed. Yeah, Tommy O’Connell and Milt Plum were good, but not compared to Graham. However, for three years, i watched what i think could have been the greatest running back duo of all time: Jim Brown and Bobby Mitchell. It was exhilarating to watch that tandem run the ball. 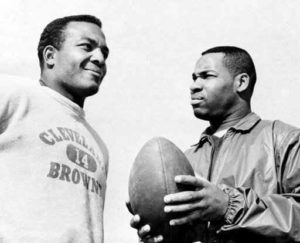 And, as i was envisioning watching on that black and white television Brown crashing up the middle, unstoppable, and Mitchell skirting the end, uncatchable, i remembered another running back who just might have called those Sunday afternoon broadcasts.

Red Grange, a guy labeled as being responsible for the success of the fledgling National Football League, was an announcer, the color guy besides the play-by-play man, Lindsey Nelson (ah yes, the first Vol announcer). i read Grange’s biography cover to cover about a half-dozen times. He and Jim Thorpe were my first football heroes beyond Lebanon High School’s Clifton Tribble, David Robinson, and Don Franklin. To hear his gravelly voice analyze a play was thrilling for me. It was long before self-promotion in the sports broadcast booths (ignoring Nelson’s penchant for flashy, garish sports coats).

So i sat back this morning and looked out my window and imagined a sunny autumn Sunday afternoon with me inside glued about four feet away from our console television, watching Brown and Mitchell destroy the defense. In my imagination, it is the Bear’s defense because Grange initially worked the booth for George Halas’ Chicago bunch — i just got this urge to evoke Jack Case, the sports editor i succeeded at the Watertown (NY) Daily Times because Jack would have written “Chicago 11 that ruled the gridiron with their mentor George Halas — but by the mid-50’s the two announcers were fixtures at CBS.

For a few minutes, i was lost in my reverie, trying to remember the exact details of a run i watched a few years earlier. Charlie Trippi, an all-purpose player out of Georgia, broke loose on a run for the Chicago Cardinals (yes, you read that right: the Chicago Cardinals) and was headed for a touchdown running down the right sideline. An opponent — oh i hope it was the San Francisco Forty-Niners because more of my heroes were Joe the Jet Perry and John Henry Johnson — took a desperate dive and Trippi fell forward. But as he fell, he tucked his head, performed a somersault and kept on running for the touchdown.

That run, Brown and Mitchell, Red Grange and Lindsey Nelson are emblazoned in my brain.

And today…well maybe next autumn, we will have passes up the gump stump, expendable running backs, two tons of commercials and an hour of replays in a four-hour broadcast, and, oh help me, Joe Buck.

i think i will just remember pro football’s finest hours.

1 thought on “Football At It’s Finest”