Oh, it was a long time ago. Several lives ago by my time. It was a lovely time usually forgotten amongst the myriad of good and bad of what followed.

Summer, 1969. John and Susan Johnson will have to give you the exact date of their wedding. i was there. Watertown, New York. About as far north as you can get and still be in the U. S. of A. After all, Yanch was not just a fraternity brother but a real friend for whom i had gained the utmost respect. i had come up from Norfolk on leave to attend their wedding but pretty much in a cloud: a one-year wonder Lieutenant Junior Grade who had just found out i was going to another world, unsure of exactly what that world would be. One afternoon, the three of us were riding around and Susan asked me what my plans were.

i did not hesitate. My goal was be a sports writer, a sports editor, and a columnist like my hero, Fred Russell of The Nashville Banner.  Yanch glanced back at me in the backseat and said the sports editor of the paper his father owned and at which he, Yanch, had begun work, The Watertown Daily Times’ sports editor would be retiring about the time i would be completing my three years of active duty. He suggested i might come up there and become their sports editor. i nodded my approval of the idea, thanked him for the suggestion, and could not think beyond the next tour, unknown except i was headed for the Pacific Ocean.

About half-way through being the executive officer of MSTS Transport Unit One aboard a USNS ship carrying Republic of Korea troops to and from Vietnam, i started thinking about what was next. i wrote Yanch if the offer was still a possibility, i was very interested.

Voila! About thirty months later, there i was. But i was making decisions about life, my family’s security. It would not end as i envisioned. None of it. But those are other stories, some too oft told.

At that time, i was on a roll. We were the first section of the paper to go “cold type” on a newspaper that was on the cutting edge of the new technology. Or rather, my national sports news, which came over by wire, i put on the first page of the sports section in cold type with the second page local news with “hot type,” then whatever space was available back with the national wire news in cold type — the sports pages had averaged a little less than a full page of copy for each addition before the change; after the change, i was averaging three to four pages of copy each day: that was a lot of work, but fun.

Even more fun was the hot type and oh so much more personally involved. i would either write or create the copy (and at the beginning of my being the sports editor, nearly all my copy), layout the page on a miniature mock-up, write the headlines, send the copy, the layout plan, and the headlines back to the linotype machines, which would click-clack spit out the little lines of lead. Then i would go back to the makeup tables where the experts stood by the metal frames for the molds, and we would place the galleys of type in their place from my layout model. When they didn’t fit, we would begin to throw out lines of linotype from the bottom, a good reason to write the copy from the most important at the beginning and the least important at the end.

And there was a sense of closeness, of identification with creating the copy. i used (gasp!) a typewriter. i did not take typewriting class at Castle Heights or anywhere else. You see, i had a magnificent typist of the 80-word per minute, no error variety at my house. She taught me the correct method, not the finger hunt and peck method of most sports writers. i called her “Mother.” So i would sit at my desk at 5:30 in the morning, my cup of black coffee, my cigarette smoldering the ashtray to the right on my desktop, and with my notes on my left and clack away. It was not gentle and when i hit the return bar, it was almost violent, wham, followed again by the click, click, click. Then i would pull the copy out of the roller with a flourish, label the top with my editing, number one or two soft lead editing pencil and commence to correct the errors in my copy. For you see although i had become a pretty fast typist, i never acquired the errorless mystique of my mother.

It was a process i loved. It’s gone. But to be honest a great deal of frustration went with it and a lot more efficiency came with this damnable machine in front of me now.

Yesterday while looking for some notes to include in my book, a faded three-column width piece of  newspaper fell out of a folder. Checking it out, i liked how i had turned three normal columns into a three-column box for my article. You see, when i became the sports editor, i announced i would not write a daily column as had my predecessor, Jack Case, the guy who gave Raymond Robinson his nickname of “Sugar Ray,” had done for uncountable years and had just about every other sports editor in the world up until then. i didn’t want to write just to write but wanted to write opinion columns or articles of special note when they happened.

This column was one of them. It appeared in The Watertown Daily Times Friday, May 26, 1972 in the upper left hand corner of the second page in the sports section, the hot-type page. Re-reading it, i realized one reason i saved it separately from the many other pages of newspapers i have saved over the years. i thought it was one of my  best. Still do. 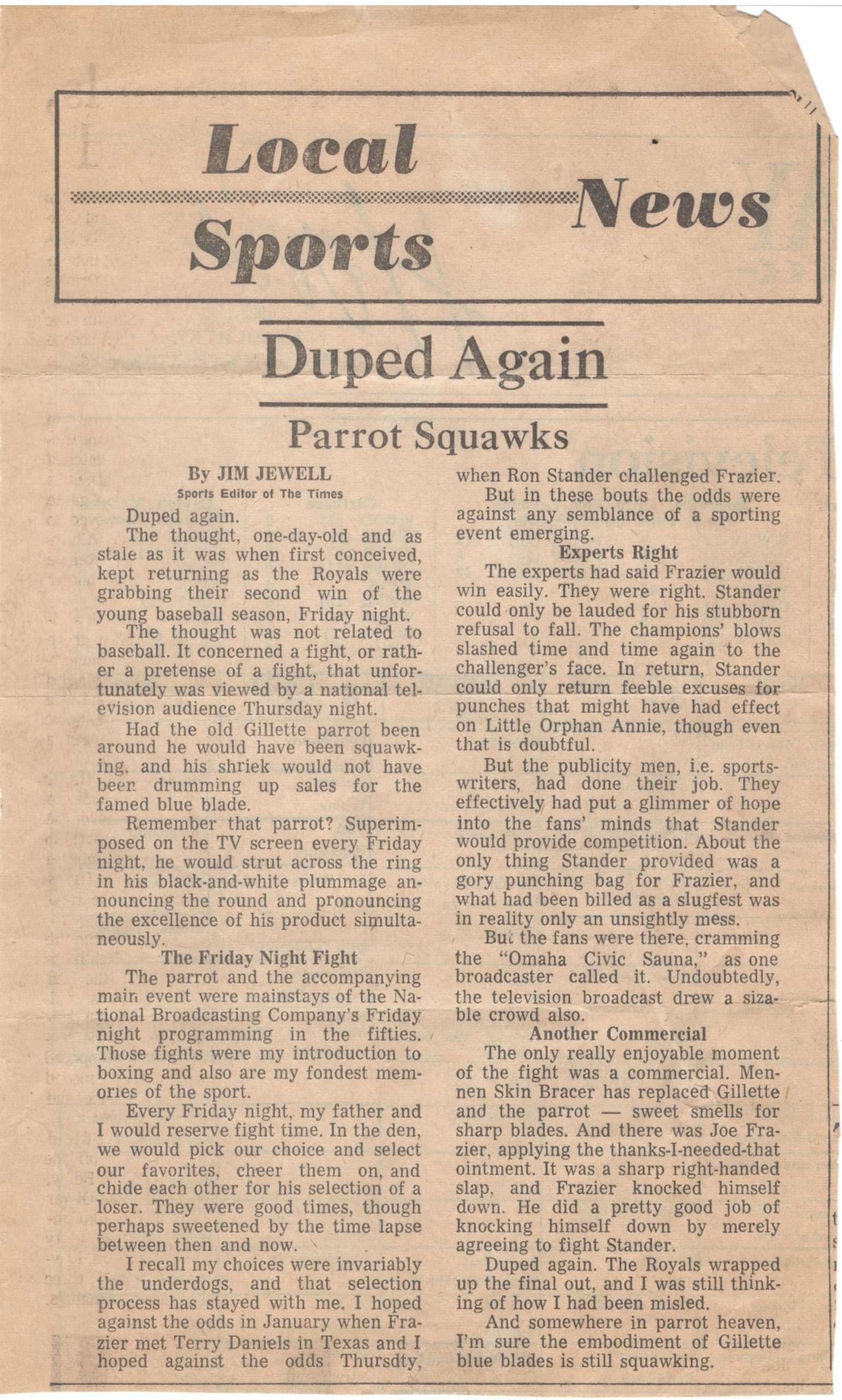