It was time. i just kept refusing to admit it.

Tomorrow will be the half-way point of my writer’s sojourn to somewhere. My plan was to gut it out for the duration. But the plan was not completely realistic. It’s pretty tough for a hard-living old fart to change his ways overnight.

But i kept at it for half of the journey to somewhere, and i actually feel like i just might be halfway to somewhere. i just don’t know yet where somewhere actually is.

Then i had a message exchange with Blythe. That’s enough to make me rethink just about anything. From my request, she forwarded me a photo and several more.

And i had promised myself to take enough of a break to honor my father on Father’s Day. i don’t really need any acknowledgement, but i did want to honor him and respond favorably when others honored their fathers.

Finally after another five mile power walk up the mountain and back — okay, okay, it ain’t really a mountain, just a fairly steep grade up to a tableland at about 7500 feet of elevation; but that’s another story — i realized i was fine with my routine of rigor but i needed a break. So i drove down to the closest grocery and got an off the shelf pizza and a bottle of decent red wine. i got the pizza because i was damn tired of preparing my own meals. They meet the basic needs but they are so miserable compared to Maureen’s fare. i got the wine, not because it was alcoholic but because my taste for liquids is narrow and i also have gotten damn tired of coffee, water, Pelligrino (even with lime), and the Jewell version of an Arnold Palmer.

So tomorrow is Father’s Day. Big Deal. i don’t need a tie. But i do need to talk about, as i once called him in a tribute, an incredible man. He was.

Those photos Blythe sent me? They were of my father with Sam (and one with my mother and Blythe) from a 2010 — see Blythe, i really do know what year it was even though i was originally a decade off — visit she and Sam made to my parent’s home in Lebanon, Tennessee.

Then there is the coup de gras: 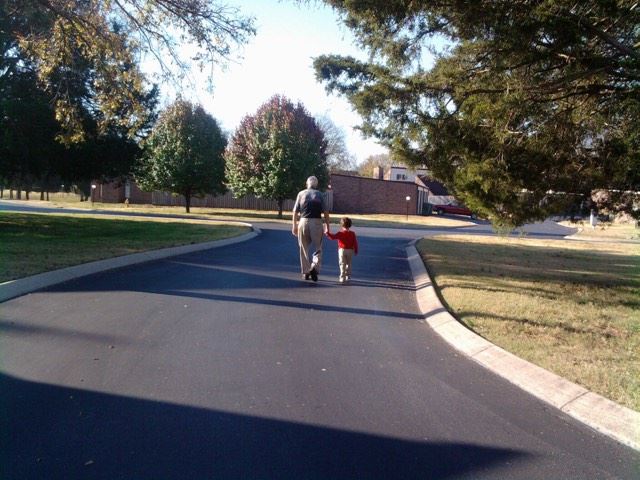 This is an 96-year old man taking his four-year old great grandson for a walk. They are mine. i am the missing link here. But it speaks volumes, i think, about a man and his relationship with all children.  i must confess i cannot look at this photo with crying a bit. In joy, happiness that it happened. That Sam James Jewell Gander had some precious moments with one of the most magnificent fathers, grandfathers, and lover of children the world has ever known.

1 thought on “Break Time and Some Thoughts about My Father”