In this dark time (if you are responsible and wish to what is best for you, your family, your friends, and the world) of hunkering down, it can be difficult to adapt. As Hays Mershon pointed out, us old mariners who spent months at sea and even longer periods away from home, have more experience than most when it comes to being isolated on a small ship for long periods of time. Seems to work for me.

But today, as you might discern from my earlier posts, was a birthday. We’ve gotten away from presents between Maureen and i on birthdays. It’s usually a meal at a favorite dining spot, dress up, good food, great atmosphere, and home to bed. That’s about it. But still, under the present conditions, going out for dinner was pretty well shot.

So what should i do?

Well, we started by screwing up her domain: breakfast. i took off for Donny’s Cafe. Donny has a great little place annexed to a bike store. Coffee is the thing, but he and his wife have expanded it into magic breakfasts and great lunches. It’s so good, all the bikers and all the cops go there. But  Donny’s place is closed except for coffee and limited breakfast items for limited morning hours. “Ah, hah,” i said — well actually the “ah, hah” came when i realized i was out of my whole bean Colombian coffee which i grind and make with a French press in my mornings — ordered an asiago bagel and an onion bagel with cream cheese (of course) and an avocado toast. Nice quiet breakfast. Maureen didn’t have to cook and i washed the dishes.

Then in the evening, Sarah and i (and Maureen, she couldn’t keep out of it), we went special. Earlier in the week, Wine Vault and Bistro brainstormed a way to still provide incredible food and wine to their customers. Wine Vault has long been our place to go for special evenings. The atmosphere is perfect, the chef is incredible and the pre-fixe repast with paired wines is absolutely the best. Chris and Mary came up with a plan. They sent out emails to regular customers offering pickup of four magnificent courses and par bread created (and i write “created” purposefully because his stuff is beyond just cooking) by Chef Gregory.

Mid-afternoon, i traveled downtown to the north end of India Street, a food maven’s heaven of cuisines: the iconic El Indio Mexican restaurant with a park of outside tables across the street (El Indio used to be where Marine Major Bruce Brunn and i would hit after a lunch run around Balboa Park for post-run tacos with a Dos Equis in the little park before returning to our flagship); the iconic Blue Water, which is the best seafood deli i’ve ever experienced; the British pub Shakespeare’s, which takes you all the way to England and provides Black and Tan’s, Guinness and Bass Ale, along with the fish and chips or bangers and mash; the Thai special place Saffron; a new American deli; a Japanese Sushi Bar across Washington; and Maureen’s favorite post meal go-to Gelato Vero Caffe, which she claims has the best gelato outside of Rome. Nearly all of these great places are offering take-out at various days and times.

Traffic was almost non-existent, parking was where i chose, both anomalies in this usual glob of vehicles. i picked up our order with a nice six-feet apart conversation with Chris and returned home in record time.

Sarah then took over getting the food prepped and setting the table.. Maureen, unable to keep her gourmet self out of it worked with Sarah on the preps while i felt…well, dispensable. The result: 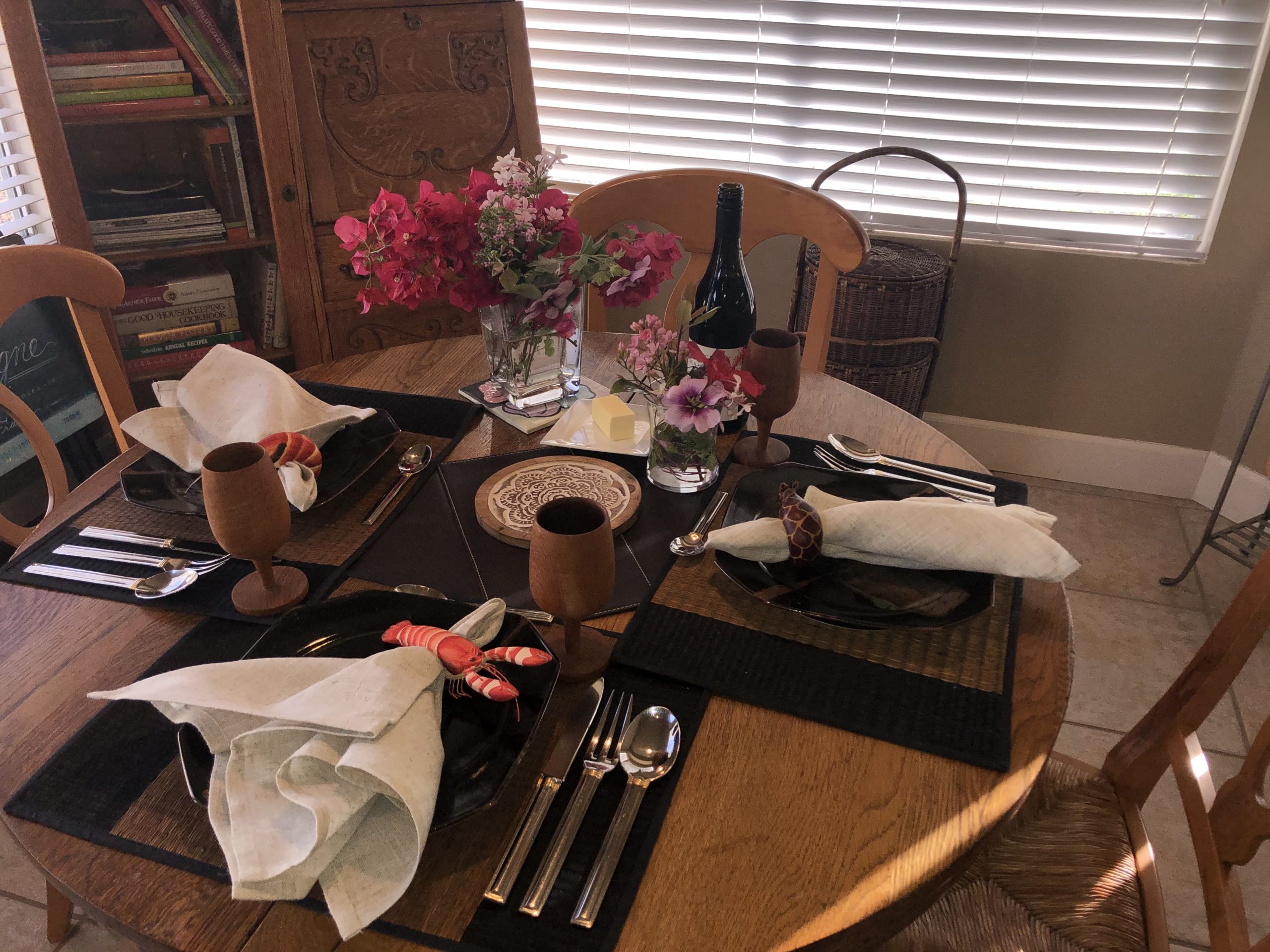 Sarah found blooms in the yard for the flower arrangements. She got out the high end placemats, the good silverware, the special San Diego Zoo napkin rings, the wooden wine goblets given to us by the legendary Aunt Fran for our wedding gift, the handmade china Maureen bought from an artist when she lived in Monterrey. i brought out the bluetooth and outdated iPod and put Julian Bream on “shuffle,” low volume. And we dined on: Salmorejo (gazpacho-like chilled tomato soup from Spain), Thai Shrimp Curry (a spicy Asian stir fry with a shellfish broth over fragrant jasmine rice),  triple mushroom lasagna (with housemade ricotta and black truffle Béchamel), Cassoulet (with Toulouse sausage, bacon stewed beans, and roasted root vegetables), and that wonderful baked bread.

At the restaurant, we get the pour of the paired wines with each course. Not ready to take on four wines, we selected a bottle of 2017 Margerum “M5” Red Rhone Blend from Santa Barbara.

Damn near a perfect dinner.

Maureen and Sarah settled into the family room to watch the end of a chick-flick comedy thing. i washed the dishes.

i had asked Maureen to name the one movie she would pick to watch if she could only watch one all of the time. She demurred. i mentioned a few i knew she liked plus threw in “Butch Cassidy and the Sundance Kid” and “Silverado.” She laughed and asked, “What about Monty Python?”

And i said, “Sure, i love “Search for the Holy Grail.”

Being Maureen, she didn’t choose her top pick, she chose “Search for the Holy Grail” because she thought Sarah and i would prefer it.

We all enjoyed until it reached, or rather, the knights reached the Bridge of Death. Maureen declared she ate too much and retired.

It was a lovely birthday day.

Of course, reality struck this morning:

“What did you do with the paperwork for the new blinds?” she asked as she shuffled the the file cabinet in my office.

“i gave them to you,” i said indignantly.

“You gave them back the first time, but you took them back to check something,” she responded.

“No, you didn’t,” she almost shouted as she began to rifle through the mounds of paperwork on my desk much to my annoyance.

“Yes, i did,” i answered haughtily but thinking she had a small chance of being right went out and checked in work room in the garage. No luck.

“They are not out there,” i said upon returning, “i gave them back to you.”

This went back and forth a few more times getting more heated after each exchange.

…then, then, she picked up a file out of the cabinet and said in amazement, “Look, here they are.”

i then had several options, and i knew, i knew it made no difference what i said, it was still going to be my fault.

She wagged her finger at me with a scowl, laughed her sheepish laugh, and then we both laughed, then hugged and kissed.

Her birthday is over, but it was still my fault.