i have said numerous times i would not have another dog until i was absolutely sure he (and i do want that last one to be just like my labrador Cass) was going to live longer than me because i never want to have to put another one down.

i’m not sure i will ever get another one, even after that probability of him outliving me hits town (which could be now, by the way). Too much trouble. Too crazy costs for caring for them. Too restrictive in my travel. Yada, yada, yada.

i have also said we need to quit worrying about prettying up our yard. We’re too old to worry about it, and it’s expensive, and requires a lot of hard work, and takes time to maintain. Yada, yada, yada.

So what do i do the last two weeks? i order a four by eight foot garden box. i dislike the destroyed bushes bordering our back yard lawn, and i spend a whole lot of time with Billie Holiday. 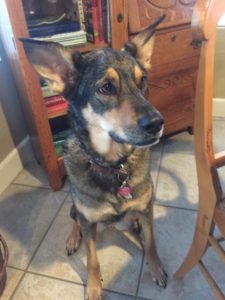 Billie Holliday is my daughter Sarah’s dog, not mine. But Billie, along with Sarah, is living with us until they can get their move to San Diego complete when they find their own place. So Billie and i have become friends. She is part German Shepard and looks it, but she is more Catahoula and acts it. You see Catahoula’s were bred in Louisiana to hunt alligators. Billie could do that. Below is the fence over which she goes to visit our neighbor’s dog Shadow, but mostly to steal Shadow’s toys and bring them back over the fence. We have been constantly apologizing to our neighbors. They understand and say it’s okay, but it still makes us a little uncomfortable.

Now, a Catahoula is also known as a swamp dog. i think that means she can leap tall 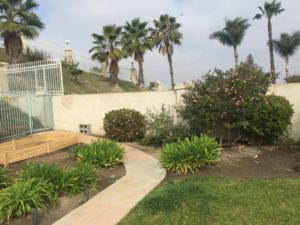 buildings at a single bound. i’m not really sure about the tall buildings, but i know from observing she can leap a five-foot fence, like the one pictured here. In fact. that is the one she clears. It’s the fence bordering our yard with our neighbors.

But fence jumping and dog toy stealing is not the only attributes Billie displays. In case you weren’t aware of this, we don’t have many alligators in the Southwest corner. Not really any insects worth mentioning unlike back in Middle Tennessee, unless, of course, we include those ground crawling nasties like tarantulas and scorpions. And yes, we do have spiders, like black widows and brown recluses. But what the heck.

Sometimes Billie reminds me of Cass. Both are irrepressible, sort of like Judy Gray’s “Brother.” Cass loved to do his thing, retrieve, hunt, body surf, and always give me a run for my money. Billie is a bit better trained. Sarah’s done a good job of that, but there is still some of that irrepressible in her. And since there are no alligators around these parts, she has found substitutes, like tree rats and lizards. We figured this out when she attacked the bushes bordering our back lawn and the path to our sitting area. i mean those bushes looked like the ents after the orcs attacked. So i took them out. 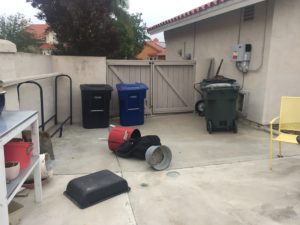 As for the lizards, they used to live under the things shown spread out from their usual places. i later put everything back in its place but then foolishly began to move the yard waste bin to the back yard where i was working. Foolishly because Billie was watching my every move. The lizard who had taken refuge under the bin scooted across the concrete and hid. He thought. i pulled Billie off, primarily because i didn’t want to have to clean up what was about to happen to the lizard. But the result was i had to put all of this stuff back in place again. 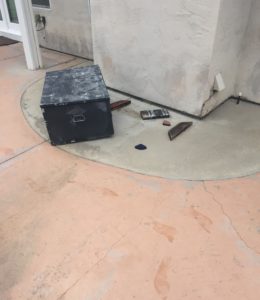 i think the lizard got away. However, i’m not too sure about the one who lived out by our chimney. We put a storage box (an old Navy cruise box from a deployment long ago) to hold yard things. i put it on some scrap lumber to keep it off the concrete. Lizards used to like to hide and rest there. No more.

And we still had the stolen toy problem. Now Billie’s favorite toy to steal is a yellow chicken toy with a squeaker — who the hell ever thought of putting squeakers in dog toys? Were they nuts? So Mister Brilliant decided we should get Billie a yellow chicken so she could have her own and not be prone to steal Shadow’s. Great idea gone south. 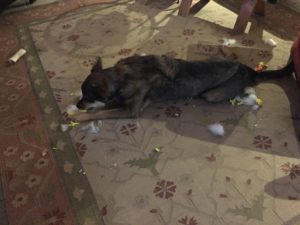 We bought the chicken, pretty close to a replica of Shadow’s prized possession. Billie was excited. We threw it. Billie retrieved it. Then, we learned a new Billie talent. This is all that Billie had left to chew on after about five minutes. The replica yellow chicken is gone to chicken heaven.

All of this was happening as spring was…well, springing. Southwest corner springs began in January with the blooming Asian pear trees and acacia. Next up will be the coral trees and then the jackaranda. But that’s a while from now. For now, i must deal with the bushes blooming. 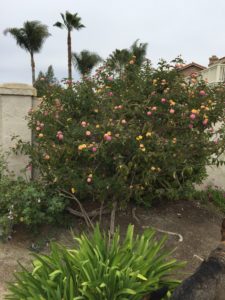 Maureen and our gardener, Paul Shipley, chose wisely for the bushes  along our border fence. And then there are the others, which Billie believes harbors alligators. 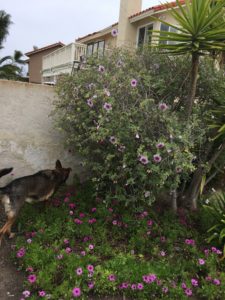 These are near where i decided to put my garden. Good idea. So i planted my precious tomatoes and strawberries. For the folks back home, strawberries bloom pretty close to all year long out here in the Southwest corner. So i planted in my box, and all was well…except i had another job to do. Remember the destroyed and now gone bushes? So i set out to dig out somewhere in the neighborhood of a gazillion roots, turn the dirt, and add to the flagstone path to the sitting area. i can now tell you this is not an old man’s pursuit. i was axing, throwing that pickaxe and shoveling. i’m just glad it wasn’t four-feet deep like it was a long, long time ago when i dug graves in Cedar Grove Cemetery (my Democrat column about that will follow). i will post at least one photo of the finished product when it’s finished. i’m estimating that will be in about a century. 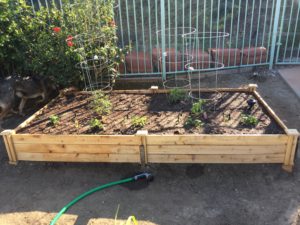 But let us not forget the garden. It was beautiful with great promise of a bountiful yield…until this morning. Maureen noticed something not quite right. She walked out and checked. It looked familiar. The pile (not shown here). Like in a cat litter box. Except it was a big pile. i mean a big pile. Equipped with a trowel and a very large litter box rake, i advanced. Carefully. You see as i have noted earlier, we have at least one bobcat in our neighborhood. One must not piss off a bobcat, even if you can’t see him.

So we read the bobcat litter box avoidance information. We talked to neighbors. And this afternoon after golf and in between checking the grill’s heat for our lamb chop supper, i planted onions.

It has been a hard two weeks, probably harder work for me in the last twenty years. Felt good. i am exhausted. Muscles are talking to me. Billie is smiling but i think she’s laughing. We have some considerable more work to do on the flagstone path.

And as for the garden and the bobcat…to be continued.

2 thoughts on “Billie Holiday and the Goofy Guy”