i was giddy, like a tee-ball player whose team had just won a game (if they allow for such dastardly concepts as winning anymore) and he had found an earthworm in his digging around third base while the game was going on.

i was depressed like having eaten my last Tennessee Pride country sausage and discovering San Diego Navy commissaries weren’t stocking anymore — Fortunately, this has not occurred but it remains one of my worst fears.

i was…well, there were all sorts of emotions i experienced today.

You see, i thought all of the drama i wrote about in my earlier post about alligator hunting dogs, lizards, gardens, bushes, and flagstones was all over except for a recap i would post with photos of  tomato plants bearing fruit, strawberries right before i picked them, and a beautiful step-stone path to the backyard sitting area to prove my point i could succeed against some odds.

Today started out well. i wrote on my book a bit, enjoyed the sunshine, found one of my strawberry plants already has blooms. “Ho, boy,” i thought, “Today is going to be a great day.

i took up my tools. i hacked and hacked with shovel, hand axe, pickaxe and pulled with my hands at the stubborn roots but i was winning. Made progress. About a quarter way through the flagstone installation. Oh, of course, it’s me and will require a bit of finish work when done. Oh, okay, not a bit of finish work, but a hell of a lot of rework, but not exactly starting over. Never-the-less as i put the tools up for the day, i felt pretty good. A project going well. A real garden, not gigantic, but a good start. The old man can still wield a pickaxe and a shovel. Bending down is a bit tougher than it used to be, but man, i’m back at it.

i  picked up my tools, put them in the wheel barrow. Uh oh,  the tire on the wheel barrow was going flat. No problem. i’ll pump it up with my air compressor (you know, the one i got even though i didn’t really need it, but it’s loud and sounds impressive, like i knew what the hell i was doing). But i should have known it was an omen. A bad omen. As i approached the area i once kiddingly referred to as the dog prison (another story), i found my effort to ward off Billie, the alligator hunting dog, from attacking the lizard, obviously a small, very small, substitute for alligators, had not been successful as i thought. 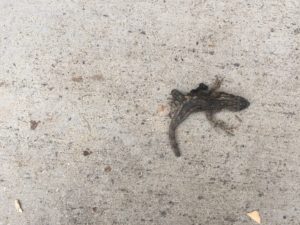 i noticed the smoker cover, long since past its usefulness as a smoker cover, was still on the hardscape. i picked it up to throw it away and found  a very dead lizard. i said the appropriate words and buried him rather unceremoniously in the trash bin. i wrote of this experience to my brother and sister and told them my posting it was unlikely because of the sensitivity of my wife and two daughters (a plus attribute i’m thinking) but then thought the lizard should have his last moment of glory, like a viewing at a funeral. Of course, now i will have hell to pay. But that’s okay. The lizard and i are at peace. 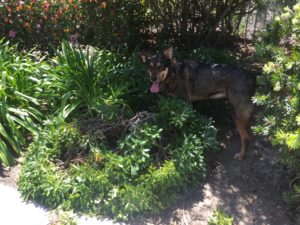 And all was well…except i had let Billie out to play while i worked. She was running everywhere, seemingly all tuckered out, but still moving swiftly chasing whatever. i’m guessing it was tree rats because when i looked up and spotted her, she was destructing another bush where we know tree rats like to hang out. Besides that (and really being tuckered out), she looked deliriously happy). i’m pretty sure our tree rat problem has been moved off somewhere else. Now, i just have to figure out what to use to replace that bush. i don’t think one flagstone would look all that good, and i’m damn sure Maureen wouldn’t put up with such foolishness.

So i wrapped up on the outside and came in to work on my book and this post. But i forgot to take the photo of the flagstone work in progress. Hence another Billie moment.

We capture a lot of water in a bucket while we are waiting for hot water. We habitually set the bucket on the kitchen floor until Maureen uses it to water her roses. But Billie thought it was her water bucket…and that is what it became…until one morning about a week ago, i opened the door to go out. Sarah and Maureen make Billie sit and wait until given the go-ahead to go outside. i have done that also but frequently forget, like that particular moment.

When the door was ajar, Billie bolted for open borders driving through the bucket of water and spilling it all on the kitchen floor. We cleaned up and vowed i would not do that again. Unfortunately, it was Sarah and Maureen doing the vowing.

This morning, i noticed the water bucket was almost dry. i filled up just past halfway. That was a bit before i realized i needed another photo for this post. i looked; i swear i looked, and i didn’t see Billie. i opened the door and then boom! Billie dashed out. The kitchen floor look very much like it did a week ago except there was more water. i went into damage control, soaking up the water on the floor. i finished the recovery job, admonished Billie (to some degree). i started back to my home office for numerous reasons and very 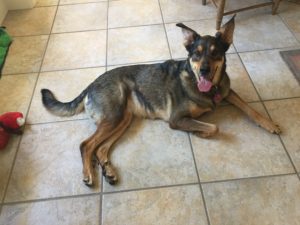 glad i was the only one here…except for Billie and the cats, of course. And there, blocking my route to the office was Billie.

And you know what i did? i laughed. i love this dog. She has a lot of me in her, just like ole Cass had a lot of me in him. She is becoming my pal, just like Cass did. She is a dog, a real, uninhibited, but better trained Cass. That, for me, is a good thing.

Oh yes, i haven’t seen hide nor hair of the bobcat since planting onions in the garden box.