The last of the Jimmy and Estelle Jewell clan will be leaving Nashville this morning. This particular twosome is headed back to the Southwest corner. We are going home. The staff side of this duo has what he considers four homes.

There is the home where we live in the Southwest corner. Bonita. i’ve lived there longer than any place else in my life. The Southwest corner, like damn near anyplace on earth, has its plus sides and its negative sides. For us, it has more pluses than most and we can live with the minuses. That’s basic risk, benefit assessment. Our assessment will be different from others. Perspective.

There is the home where i lived when i learned to live: 127 Castle Heights Avenue, Lebanon, Tennessee, where my parents lived for 62 years. i got to know almost every little corner from basement to attic, intimately from cleaning the clunkers of coal embers out of the crawl space ledges in the basement to going through all the storage in the attic with awe as to what was up there, washing windows, stripping and waxing floors by hand. That home is now in someone else’s hands, but it’s still my home.

There is this Navy home thing. It is broad and expansive. Of course, there were the duty stations, ’bout eleven of them. There were places home to me we called liberty ports. And there was the sea, which will always be a home for me.

And then there is Nashville. It was home for the shortest period of time, 1962-1967, although it was home in abstentia for the  last two years while i moved back to Castle Heights Avenue and car pooled to Middle Tennessee. i was just passing through Lebanon and Murfreesboro. Home was with my friends in Nashville…and still Vanderbilt.

A great deal of that short-lived home is gone, made way for new buildings, even a new style of life. Maureen and i went to breakfast yesterday at “Biscuit Love” in the Gulch. It’s diagonally across the street from the Station Inn. The Station Inn was  part of my home. It is now surrounded by high rise condos and about forty-leben chic, along the order of Biscuit Love, dining places. Station Inn reminds me of the Waterfront on Kettner in downtown San Diego, a refusal to change. Too good to go away. Period pieces not yielding to the development men hungry for more money.

We walked to the Frist Museum, what used to be the old main post office next to Union Station, which is now a hotel. Then we walked back to our hotel, a two-mile journey past the modern Gannett “media” building, all modern and glitzy that used to be The Nashville Banner and Nashville Tennessean co-occupied, wandering and winding maze of two real city newspapers and past what used to be Beaman Pontiac and is now a megapolis of every kind of car dealerships and down the west end of Broadway where Mac’s Diner, a working man’s restaurant which served milk, orange juice, and water in pint beer glasses because that was what was consumed the most, when it used to be but is now occupied by student hangouts, high rise hotels, and lord knows what else and then we continued across the campus where the library is now a modern multi-level jim-get-lost labyrinth instead of the Dewey Decimal System wooden files staring you in the face at the front door and the study hall where Spence Wilson once let loose a toy train and the stacks and carrels (oh lord, i hope they are still there) upon stacks and carrels. And dare i tell you? When the civil engineering guys used to learn the craft of surveying in the yard of the library and set up their scopes on tri-pods and ignoring the surveying rods, would waste the lab time looking through the scopes at the coeds in skirts reading while sitting on the three-foot high border wall of the library and the “civil” engineers would spend the lab time hoping to shoot a beaver. There i mentioned it and hope no one is truly offended.

And the residence halls where quads used to be. And engineering marvels of buildings where old buildings with high ceilings used to be and holes where new marvels will soon be.

And Johnny’s Market (Al Rotier’s dad) ain’t down Elliston Place anymore where Cy Fraser and i bought a six pack of Gold Crest 51 beer thousands of years ago and drank three apiece even though it tasted like some of the metal had flaked off and disolved in the mixture and we both became ill and blew more than lunch but at $1.25 a six pack, it was all we could afford. And Rotier’s itself is now only open from 11:30 — 3:30 every day except Sunday when it is closed when it used to be open seemingly all the time and we all drank Pabst Blue Ribbon, “PBR” or “Big Blue” we called it and kept our own tabs and played the pinball machines with no levers that paid and built up the odds by pouring stacks of nickels in, until you lauwered (still don’t know how to spell it) it and hit too hard on one side and got a tilt and lost your nickels unless you were Charlie Hon who paid for his room and board playing those machines and Al would gather bunches in the corner and plot seeing the brakeman’s wife (an oft-repeated event that cannot be told here) and Sim Davis walking out mumbling something about getting a shotgun and i was too dumb to figure it out and Mizz Rotier looking over her shoulder at husband Al and the plotting bunch and showing her displeasure with a raised eyebrow and Billy, the avigator, alligator Parsons and i having tuna salad lunch with saltines during summer school and going back to the summer deserted house now one of those holes in the ground and listening to Paul Harvey and his noontime show and sometimes carrying over to “the rest of the story.”

As we walked the final block, across the street was Centennial Park where they play pickup touch football on the weekends now where my bunch sat on the statues and ate the first batches of Colonel Sanders Kentucky Fried Chicken when the colonel, the real one first opened a franchise near the campus and we thought it was pretty good because it was really Kentucky Fried Chicken and real biscuits and real mashed potatoes but it wasn’t as good as Loveless’ cafe out Highway 100, which had sit down family style dinners on Sunday with Tennessee Country Ham as well as fried chicken that was better than the colonel’s and almost as good as my mother’s and when Harvey’s, the family actually that owned the department store downtown on Church, put up the big Christmas scene with thousands of lights around the wise men and the shepherds and the stable and the baby with his mother and father in the center focus before some yahoo cried foul and made them take it down.

But there across the road was something not gone, something romantic, two-plus centuries old now.

The Parthenon. Just like it was near 2500 years ago, same size, impressive and i have seen both this one and the one in Athens and remain awed, moved by both, and breathe a little faster while thinking to myself: 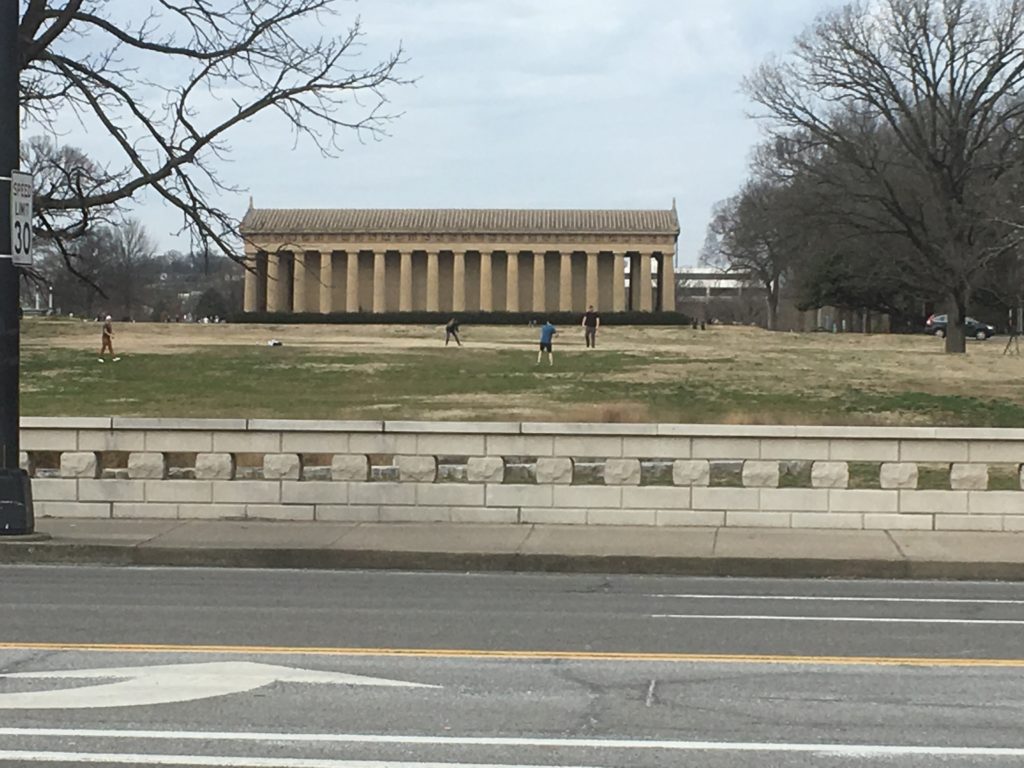 And i say, “Aloha, Nashville” because i like the Sandwich Islanders bidding departure because “aloha” doesn’t mean goodbye.