This may end up as a Lebanon Democrat column, but the wonderful afternoon has made me post this in advance.

Maureen and i are looking at options. She is now officially, if not actually, old, and i passed that stage a bunch of years ago. We are now on a fixed income with the exception of stock market and bonds fluctuation, and my continuing thoughts of changing this site to a subscription-base blog (with the help of my friend and freaking brilliant multi-media expert, Walker Hicks).

So we are constantly looking for ways to ensure we can enjoy the rest of our lives in the manner we desire. Relocating is a major consideration. Why? California is one hell of an expensive place to live.

Then things happen like today. Maureen went to yoga, and i did some heavy lifting (for me) yard work. We had Maureeen’s smoothies and her chicken salad for lunch. Then, Maureen suggested we take the rest of the afternoon off.

We went to Coronado, a place which should be called heaven when i lived there as a single Navy Commander and remains one of my favorite places on earth.

i parked about a half-block from Ocean Boulevard. We walked down the beach access steps, and i was in my wonderful world of long ago. On my last Navy tour, my job was at the Naval Amphibious Base. Nearly every day i was there during lunch, i would run the beach almost six miles to the Navy’s North Island security fence and back. At the west end (the beach faces south), there is a dog beach.

My old lab, Cass, would body surf there. i would wade to waist deep, toss his toy beyond the breakers. Cass would crash into the breakers, find his toy, and body surf back to me. Sometimes i would turn around and as many as one hundred beach goers would be gathered to watch him. i could have kept doing it until he would have given out and drowned.

This place is a solace for me. 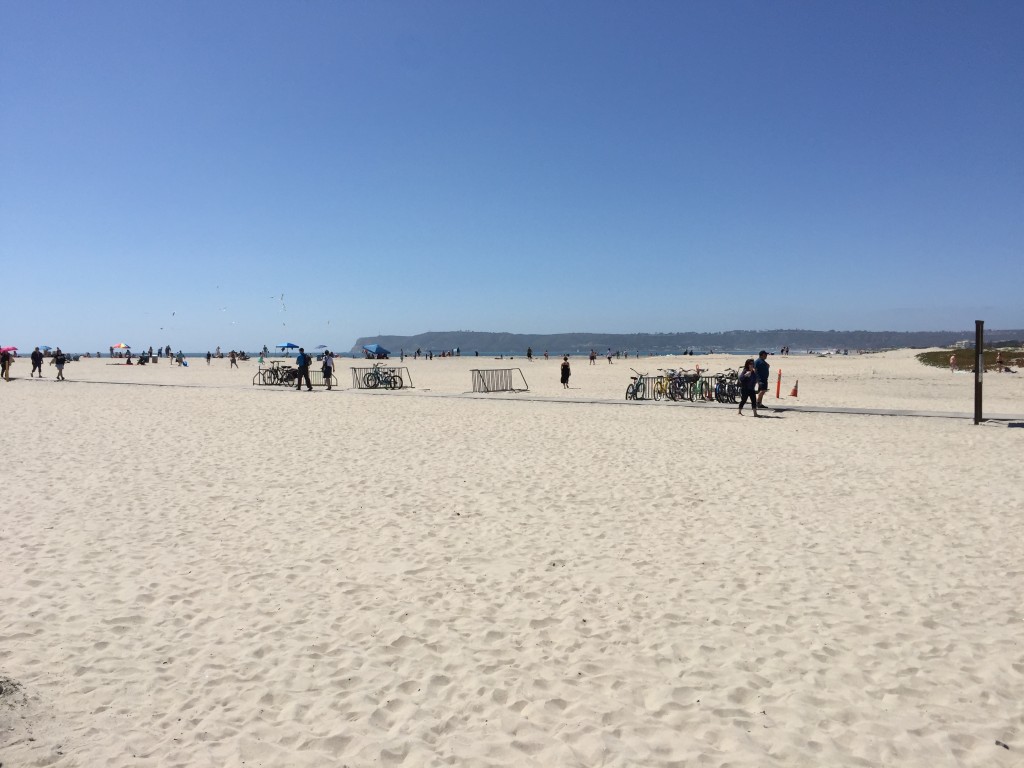 First sight walking onto the beach. Point Loma and the Pacific is in the background. Bike racks and beachgoers loving the 70-degree weather. 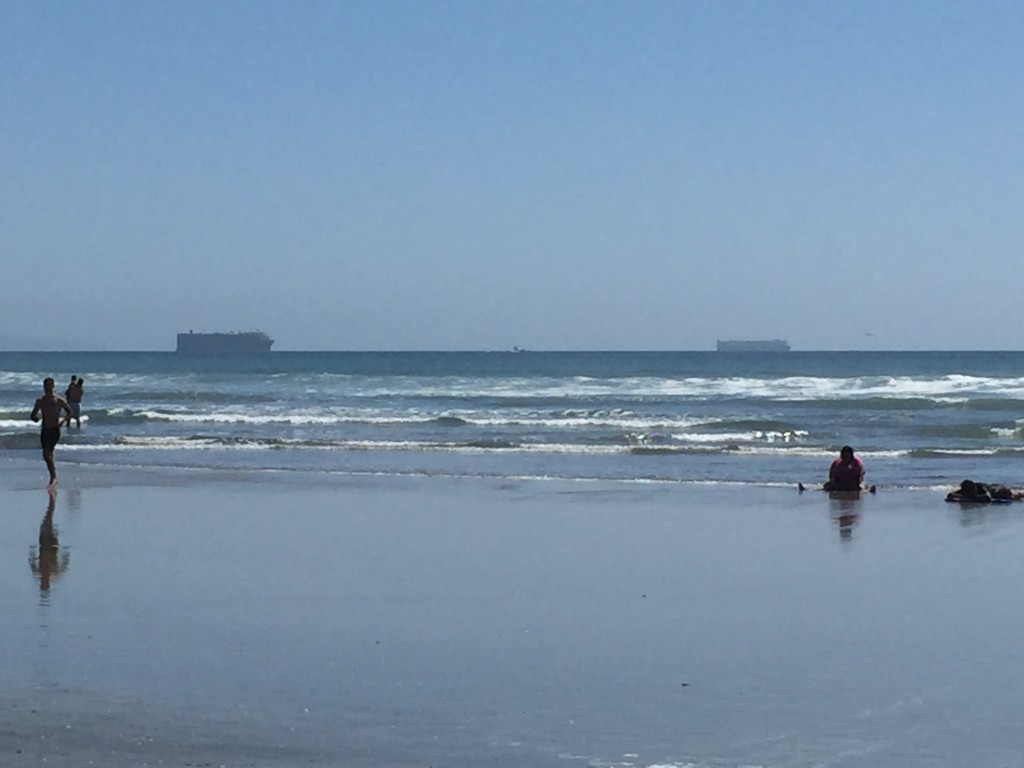 On the horizon, two “Ro-Ro’s,” large vehicle carriers so named because they are “Roll on, Roll off,” these most likely from Japan or South Korea, that have not been able to enter the bay, moor, and discharge their cargo for reasons i don’t understand (Please explain, Alan Hicks). This folks, is big, big money while the large person sitting in the surf and the others frolicking didn’t spend a dime to be on the beach (of course, they could have spent a fortune to get there). 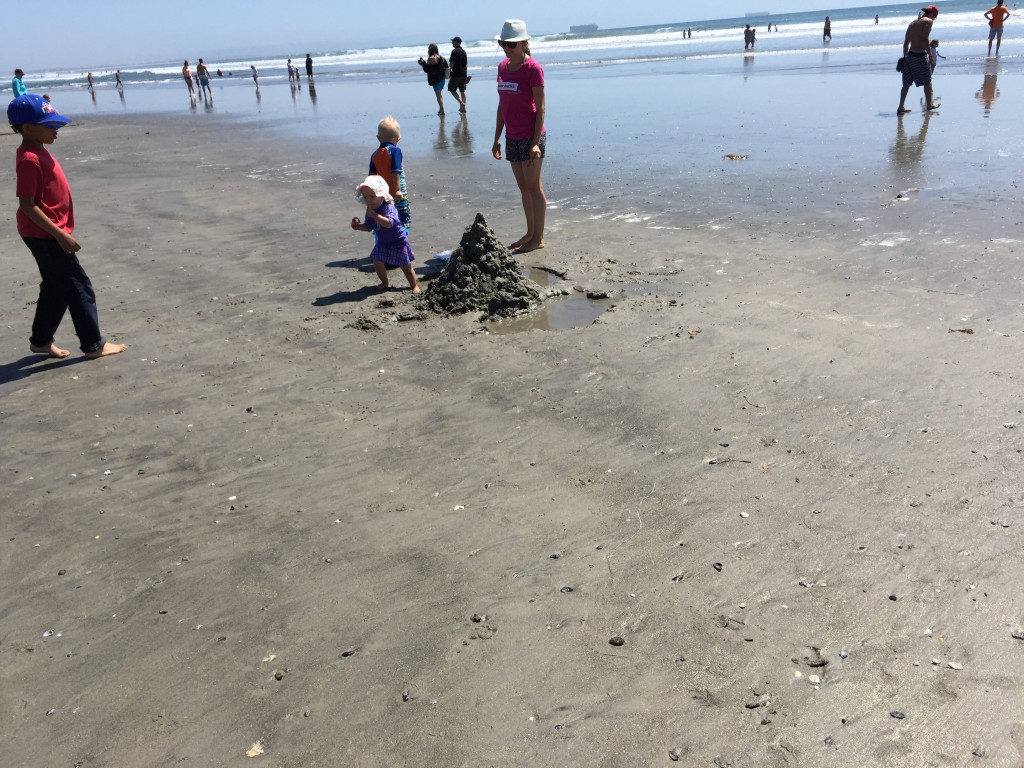 A young girl, her two brothers, and their young mother admiring their sand castle. 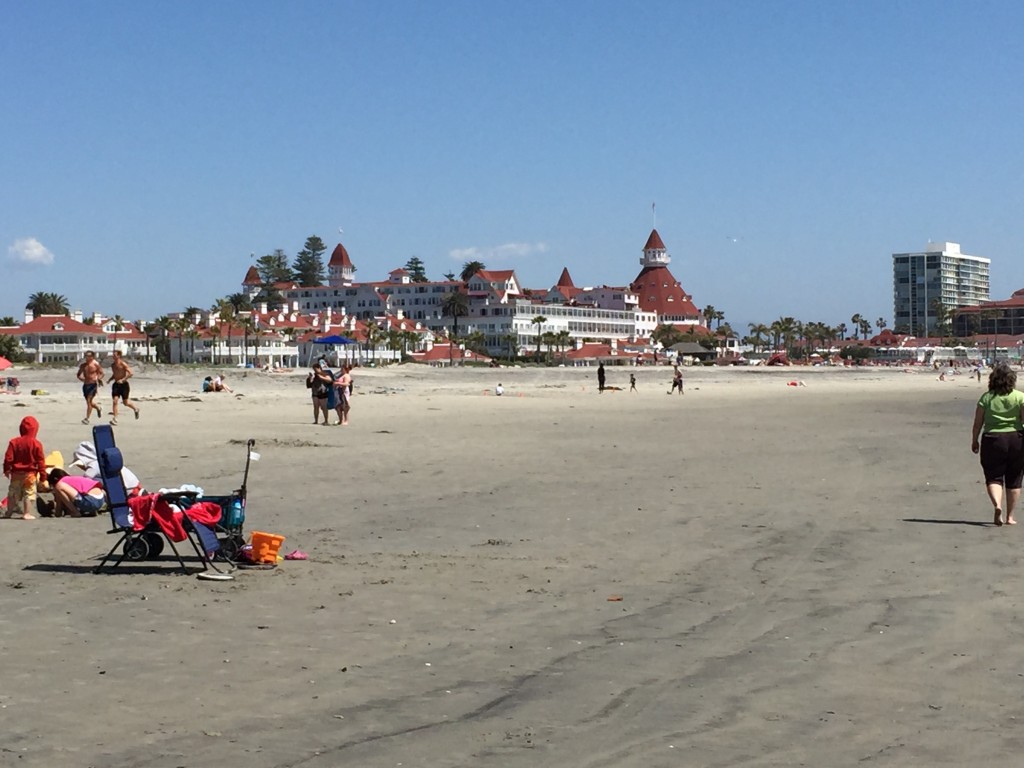 Our walk took us to the Hotel Del Coronado. Some of you who have not traveled to San Diego may remember it from the Marilyn Monroe, Tony Curtis, and Jack Lemon movie, “Some Like It Hot.” It has changed, expanded, gotten more expensive, but remains one hell of a place to visit. 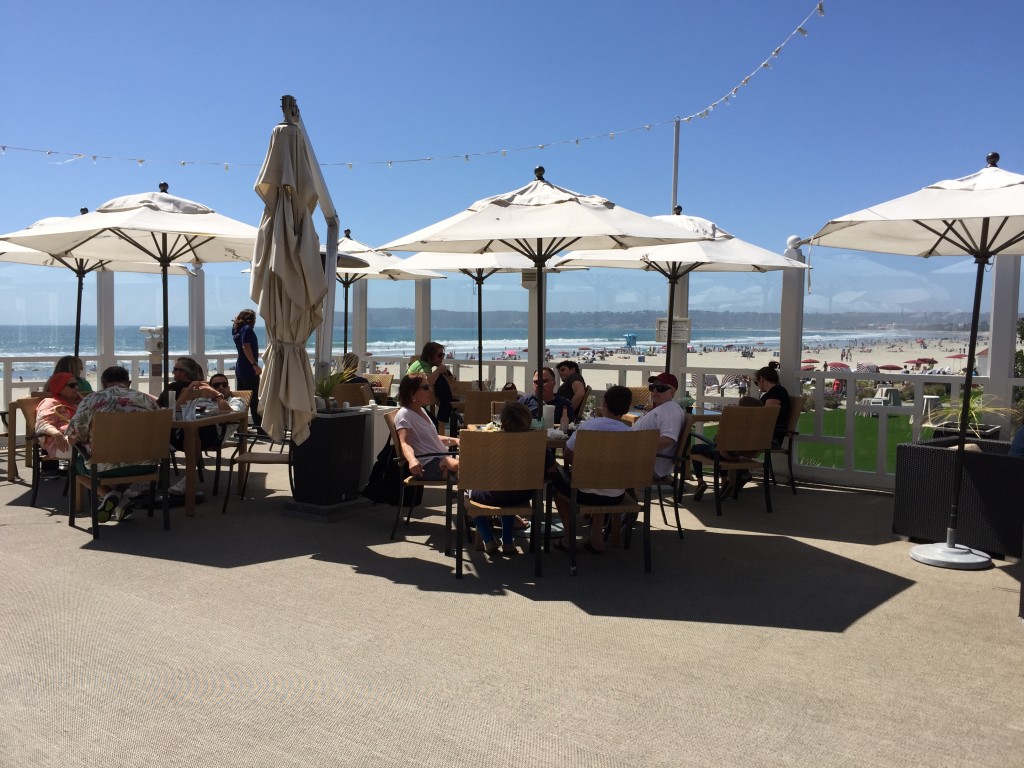 I cannot ever create the photographs of Brian Lippe or Lotus Carroll, but this catches the flavor of the walkway at the “Hotel Del” as we call it on the walkway extending toward the beach. i took this photo sitting at the bar of the Gazebo towards the end of the walkway. They used to have a new age combo perform on afternoons like this where all the umbrellas are. The pina coladas are the best  (perhaps it’s just the atmosphere). My parents, Bob and Carol, and many other family and friends have been escorted there by us for the atmosphere and the pina coladas — my parents, especially my mother loved them. 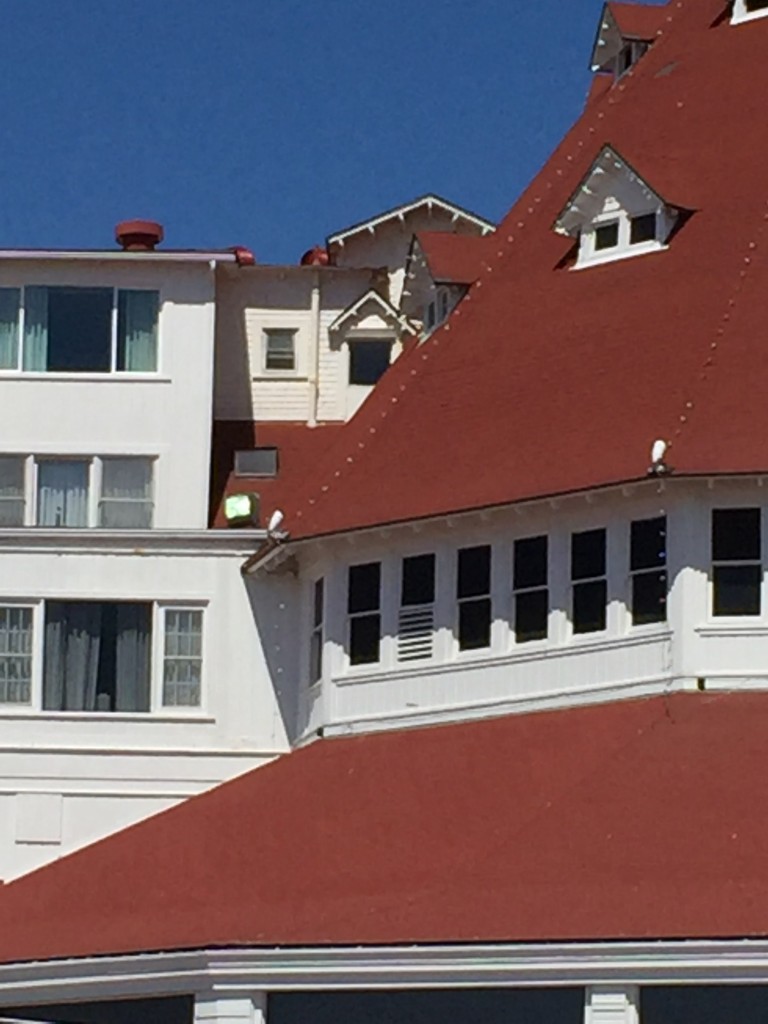 The two small windows in the top center to the left of the famous cupola is the suite where Maureen and i stayed for our twentieth anniversary. We had made reservations for our “getaway” weekend about 15 miles from our home. Upon arrival, we were taken to an interior room about the size of a large closet, the going room for the price we paid. Vowing to make the most of it, we laid down to take a nap.

The phone rang and the receptionist announced that since it was our anniversary, they had upgraded us. The suite was large and the two windows has one of the best views ever. It reminded me of the enormous suite Blythe and i had at the Empress Hotel in Victoria, B.C., again a room assignment sheerly out of luck. 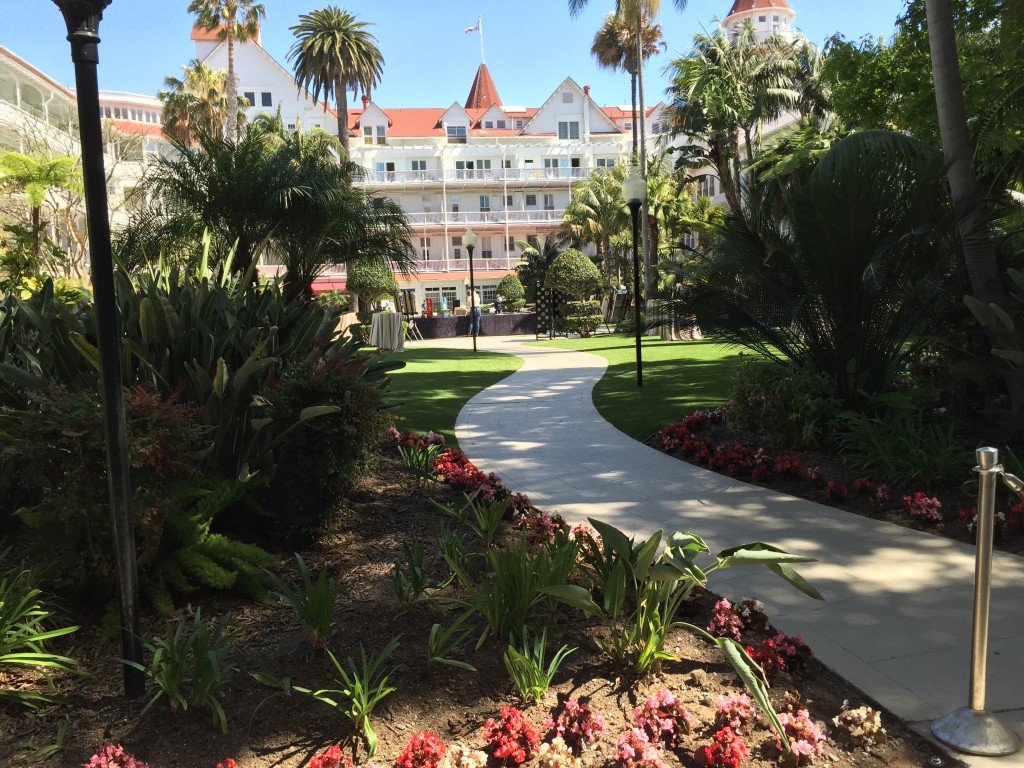 This is the interior courtyard of the Hotel Del Coronado. i would like to have had my older daughter’s wedding and reception here, but that was a wonderful venue in Austin. i would like to have it for my younger daughter’s reception there and a renewal for Maureen and i at some far away time, but i simply don’t have a gazillion dollars to pull it off. Still, it is a nice place to just sit for a while.

On our walk back along Ocean Boulevard, we passed the Spreckles’ home. It has had many owners since the original Spreckles family, notably Larry Lawrence, who owned the Hotel Del Coronado and was the United States ambassador to Switzerland in Clinton’s administration. In the old days, the island was actually two islands, Coronado and North Island, separated by a marshland filled with the Pacific during high tide. Coronado’s polo field, now houses, was on the edge of the Spanish Bight. Spreckles would house a complete polo team in this house and their horses were stabled in the back…a different time.

And we took one more look as we turned down the block to our car. Point Loma, beach goers, dunes: a world apart from just across the street.

But folks, i gotta tell you: this kind of stuff makes it awful hard to even consider anywhere but the Southwest corner.