And there are some things i’ve done of which i am immensely proud. One of those was the manner in which i handled my job as Executive Officer of the U.S.S. Yosemite (AD 19), my last operational tour in the Navy. i reported aboard twelve days after Maureen and i married, deployed to the Indian Ocean just over a month later.

The Yo-Yo had a crew of 900 with 100 women sailors and six female officers in a wardroom of 44. Previously, i had worked with one female Navy officer, Carolyn Prevatte, at Texas A&M NROTC from 1976 to 1979; in 1982, i saw a female deckhand on a tugboat assisting the U.S.S. Okinawa (LPH 3) tying up to a pier; and in 1979, i listened to three female officers Navy sounding officious at the Admiral Kidd BOQ swimming pool while i was attending the Tactical Action Officer course in San Diego. That was it before i was charged to be Number Two on Yosemite.

i was old school Navy, the kind they don’t have anymore. We were rip-snorting, steam-driven, wild liberty hounds. Women were what we left back home and what many chased in foreign ports. There were many things wrong with that Navy, but there were many good things, too. i was frightened…well, not frightened but gravely concerned about being in charge of a ship with women as part of the crew. i remember being glad i was reporting aboard married rather than single. i later found out Captain Boyle had considering rejecting my assignment until he found out i was getting wed before i reported aboard.

i tried to get information about the “Women At Sea” program, taking leave and going to Norfolk rather than spending my last week in PXO school in Newport. My intent was to spend a day in Washington with the program coordinator, but she could not make herself available: too many congressional hearings. i ended up talking to the XO of a sub-tender with women in the crew. It was a total loss: the guy was macho up to his ears where if he had one, his brain had stopped working.

So there i went. i am still going to write the XO log kind of book about that deployment. Eleanor Hicks thinks it should be my next book. i think i’m going to write one or two more before that one. My working title is Steel Decks and Glass Ceilings.

But today, i was attacking the piles in my home office: fairly successfully for a change, when i ran across this letter. It was from Lieutenant Kathy Rondeau who transferred from the Yosemite in Diego Garcia to report to her new duty station at NAS Jacksonville.

Her letter makes me feel proud of how it went on Yo-Yo, nearly eight months from Mayport and back. Challenges abounded. Frank Boyle and i worked together to make it work with very little coherent direction and often cross-threaded decisions from the desk sitters in DC (and when we got back, realizing the brass did not want the program to be a success: they did not want women to be stationed on ships).

And not only did it work well, the CO and XO gave those women, especially the officers good counsel on what they needed to do and what to expect in their careers. Kathy’s letter validates that.

i don’t know if you can read my scans. The new multi-purpose printer and i aren’t familiar enough with each other yet. So here are excerpts from that letter:

Thank you for all you did for me. You can never know how much you have helped me grow as a Surface Warfare Officer. That night we spoke about OOD quals – you said a lot of good things and I listened to you good advice. I agree with you about not worrying about what other people think or how other people got their quals. Also, i am proud to be a Surface Warfare Officer, and XO, if it had not been for the cruise, you, and the Captain, I wouldn’t be so proud…

…I never said goodbye to you, XO, it was too hard for me to do…you were so good to me and taught me so much professionally and built up my self-confidence as a Surface Warfare Officer and a department head.

That’s enough. i’ve put my scan of the three-page letter below. My new printer and i are not yet well acquainted enough to make the scans more readable.

Sadly, i cannot find Kathy on the web. i think i remember correctly that she went on and at least made captain. i would like to talk to her today and see how she is doing. And thank her for making me proud of doing the right thing on Yosemite. 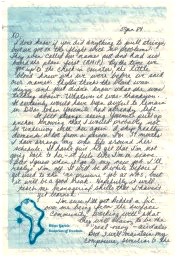 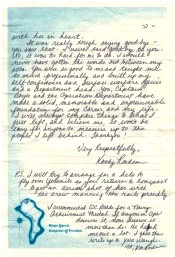