In my continuing quest to not do anything productive after 3:00 p.m., i have spent most of my late afternoon and evening piddling around with a whole bunch of stuff, including shuffling my piles of things to do into new piles. While doing so, the below photo, included here before fell out of a pile. 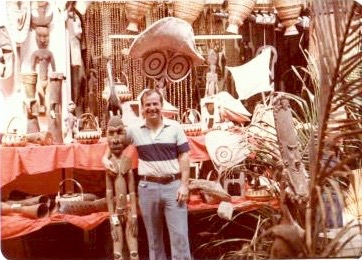 It still makes me laugh and recalls a port visit filled with unique experiences. This was one of them.

In November 1969, i joined the staff of Commander, Amphibious Squadron Five in Hobart, Tasmania, Australia. Most of the squadron ships went from there to Sydney and then through the Great Barrier Reef to Port Moresby, Papua New Guinea. On one day of liberty, several of the staff officers went out to artifacts shop, a large open-air building with an unimaginable amount of stuff from the natives.

Had i a brain, i would have bought everything i could carry back to the ship. All of it was at bargain prices. i could have made a bit hit financially selling it back in the states. But, of course, i didn’t want to fool with it. So i bought a wooden carving, a rather grotesque face carved into a shield shaped three-foot board. The face had an oversized hook nose. The shop sales person informed me, it was used by natives to hang raw meat from the roof of their straw and mud hut to keep it away from animals before it was cooked.

After i was married to Maureen, she decided my treasure was ugly, scary, not politically correct, and several dozen other things to express her displeasure. After my arguments, aka pleadings, were summarily dismissed, i threw it out.

About six months ago, we went on one of our frequent visits to the Mingei International Museum in Balboa Park, one of favorites. One exhibit had wood carvings from Africa and Southeast Asia tribes, among others. There were a number of such works on exhibit with information attached including the estimated value. i pointed out to Maureen we could have displayed it in our home to show how connected we were with native artwork in many countries or we could have sold my hook-nosed buddy for about a thousand dollars.

She moaned and complained about me listening to hear and complying with her wishes to throw out the old hook nose.

As i roamed around the shop with Conrad Borman, the guy i was relieving as Current Operations Officer, i spotted the statue in the above photo. i gave him my camera and he took the shot. i could not resist placing my hand in a most inappropriate place.

i should have bought the statue instead of old hook nose. Maureen might have let me keep it but with no fondling allowed.