There’s this incredible little corner of the city and the world in the Southwest corner.

India Street winds from downtown San Diego where it is the hub of what was the Italian fishing community and is now old Italian and haute cuisine eateries alongside new high rise condos. India Street parallels Interstate 5 north pass the airport until it dead ends into Washington Street.

i can feel the city history’s on this journey, even wondering what it was like when Richard Henry Dana traveled a similar route in 1732-34 (San Diego was a major part of Dana’s great book, Two Years Before the Mast). But i travel to the little corner at the end of India Street because i like to eat good food.

Perhaps our favorite dining in San Diego is at the Wine Vault and Bistro, an upstairs wonder in atmosphere and incredible pre fixe paired wine menus. The food, the wine, and the atmosphere just can’t be beat in our estimation. El Indio is one of the best known border Mexican restaurants. Many of the diners order and then take their meal across the street to a concrete picnic area.

Next to the Wine Vault is Shakespeare’s, a no-kidding English pub. Great British fare and i’ve never had anything but Guinness draught there, not even a “black and tan” (Guinness and Harp for the Irish version, Guinness and Bass Ale as the one i know best).

Close by is Saffron. Maureen claims it is the best Thai restaurant in San Diego, and i can’t argue with that. On the corner is Gelato Vero Caffe, which offers possibly the best gelato in the world.

Turning toward the bay on Washington and passing under the interstate is 57 Degrees. It’s a wine and beer tasting place with incredible appetizers, with an expansive array of wines from all over the world, over 100 bottled beers, and all twenty-eight San Diego craft breweries on tap.

Before the drive gets to all of this eating stuff, the roadside businesses hide a very informal, small, and casual place called Blue Water. For several years, we ignored it after it was established in 2006. But once Maureen just dropped in to check it out, it’s become one of our most frequented spots for fresh seafood.

We stopped for lunch today. There are all sorts of wonderful tacos, sandwiches, and full meals, but it is damn near impossible for me to not order their mussels. Today’s special was “bourbon, butter, jalapeño, and lime mussels and clams.” 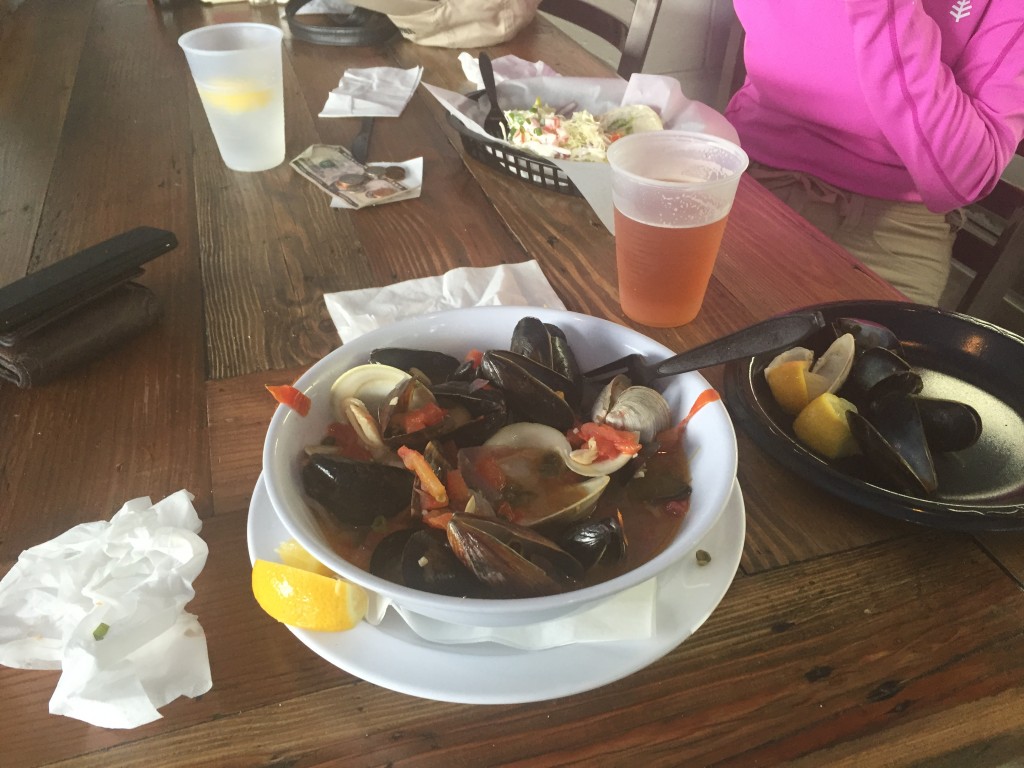