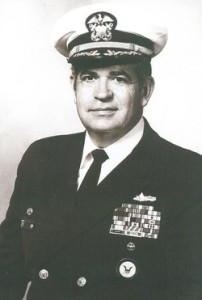 He also was in a underwater demolition unit (the origination of Navy SEALs) in the Pacific, was awarded a masters degree in nuclear physics from the Navy Postgraduate School in Monterrey, California, and was in Admiral Byrd’s command in the admiral’s last exploration of Antarctica.

I climbed the ladder to the bridge, feeling a bit awkward. The port should be talking to the captain of the ship, not the commodore, and there was this aviation-surface tension, not to mention the reverse seniority awkwardness. As i arrived, Captain Hayes in his gravely booming voice directed his junior officer to give me the microphone to the bridge-to-bridge radio.

8 thoughts on “A Pocket of Resistance: Captain J.C. Hayes”