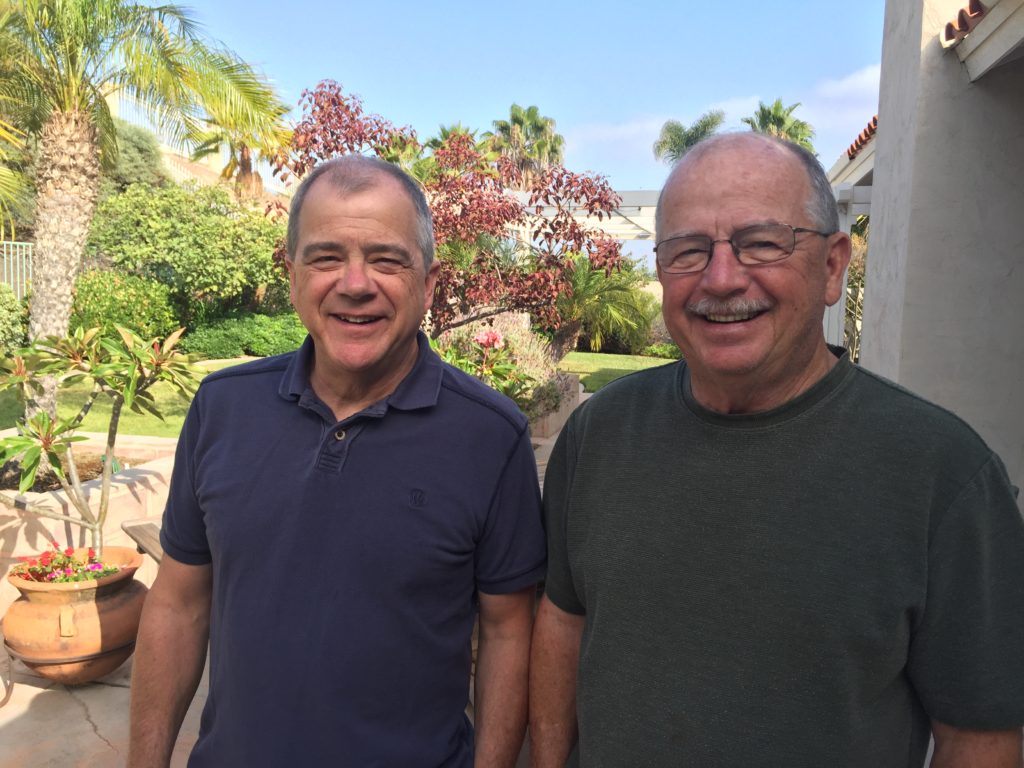 He and Carla left yesterday morning, pulling out of our driveway and driving down the street headed for the airport.

When people i care about depart or i leave them, there is an emptiness i feel. In this case, it’s right silly of course. i will see him and his wife again, probably, hopefully quite a few times here and there for the rest of our lives.

But you see i had him for me for three days. Of course, Maureen was around for most of that time, and Carla joined us before and after the Romance Writer’s Association annual conference in downtown San Diego. Our time with Carla was way too short. She is a wonderful writer, woman, mother, and grandmother, and as smart as anyone i’ve ever met. Two nights and parts of three other days were not enough. But those three days with my brother were some of the best i’ve had in a while.

My brother Joe is five years younger than me. i sometimes like to think his observing his older brother behaving like a locomotive going down the track without an engineer might have given him a lot more sense than his older brother.

Joe read the World Book Encyclopedia before going to Castle Heights, and my memory says it was before attending Lebanon Junior High. i mean the whole thing he read.

He was spent his youth learning automobiles from our father, reading continuously, learning from his teachers, exploring, camping, and avoiding anything he saw his brother beat himself up trying to accomplish, like biking and water skiing. That is to say, Joe had some sense; his brother not so much.

Both earned scholarships to Vanderbilt. The resemblance stopped there. Joe graduated, earned two masters at Boston University, became a minister of high moral and ethical standing, and delivered powerful, thoughtful sermons. He married and remains married to the successful and widely read Carla Neggers, having a son and daughter, and now has three grandchildren.

Except for several annual trips to Ireland, vacations in Florida, returning home to Lebanon, Tennessee, and several other escapes, he has lived in New England, albeit bouncing around in that area of the country quite a bit, since leaving 127 Castle Heights Avenue in 1971.

He can write like nobody’s business. He wrote an inspirational book on prayer, The Elements of Prayer. His weekly articles in his church’s newsletter while he served in Springfield, Vermont, are some of the best writing i have ever read anywhere.

A retired minister in Vermont. He made the decision to retire completely and enjoy his life with his wife, his daughter, son, and son-in-law, and his grandchildren. He does.

He is a wise man.

His brother, aka me, blew out of Vanderbilt like a falling leaf: bad choice of majors, lots of partying, and not much studying. Finally getting his degree from Middle Tennessee, he escaped the draft by  going to Navy OCS, getting out after his initial obligation, writing sports in Watertown, New York, getting back in the Navy, wandering around the country and world until he completed active duty, has had about a dozen jobs since then, and to some degree is still working. aka me was married twice before the third one stuck.

By the way, he, aka me, wouldn’t change a thing because his life has produced an incredible forever wife, two talented, lovely, and caring daughters, and a grandson with unlimited potential.

So we’ve got this wise man who was a preacher, a Christian, in the Northeast, and this goofy guy who was an officer on fighting ships in the Southwest, about as far away as two could get in careers and location.

It is sometimes scary how much we are both alike.

While here, after Maureen had retired for the evening, or when we had moments with just the two of us, we talked a lot; or rather, i talked a lot; Joe talked when needed. One late night (for old men), i was sitting in my chair and Joe was sitting on the couch while we watched baseball on television. i could not help but think of other late nights when the others had gone to bed. My father would lean back in his recliner while i lay on the couch, and we watched baseball.

As Joe and i talked, i kept thinking he had the same experience with my father as i did, as he and i were sharing at that moment. In our case, it seemed to me we kept switching roles. i wondered if Joe made the same connection. i hope he did, but i never asked.

He’s gone now. With Carla, he flew back to Boston and drove back to Vermont yesterday.

In case you haven’t already figured it out, i admire my brother. Immensely. But more so, i love him. i ask his advice. i heed his counsel. i am overjoyed at his success.

i have a lot of close friends, buddies. He and i have a wonderful sister who should have been with us this past week.

For you see, Joe and Martha are my best friends.

There is an empty spot, actually two this morning at the breakfast table. Life goes on. Joe and i were meant to be about as far away as anyone can get and stay in this country.

Still, i miss him.

1 thought on “A Pocket of Resistance: Brothers”