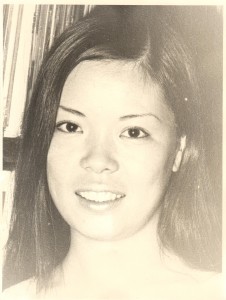 We called her Judy. i never learned her real Japanese name. She was one of a bevy of beautiful and bright young women who worked in the Stand Bar Butterfly in Sasebo, Japan, when i was spending about six days out of every twenty-two as the Military Sealift Command (nee Military Sea Transport Command) replenished our transport ship, USNS Geiger (T-AP 197) and later the USNS Upshur (T-AP 198).

Now before i go any further, Judy and the Stand Bar Butterfly were not what you might be imagining now.  The bar, which also served appetizers, was far from the red-light, Fiddler-Green craziness of sailor town, a red light district of more than 250 bars (i know because Miles Humphrey and i counted them, but that is another story). It was in downtown Sasebo; a “stand bar” was a legitimate bar and not a front for anything else, and the women who worked there were on the up and up. They were bartenders.

My fellow officers of MSTS Transport Unit One took me there my first night after reporting for duty. We had been out carousing and drinking at the “Town Club,” the Navy’s officer’s club, which had been the headquarters of Admiral Yamamoto when he planned the attack on Pearl Harbor. As we grabbed a cab for downtown, the CO, Hank Fendt informed me the Bar Butterfly was like a base of operations for the unit officers, which were the CO; me, the XO; two doctors; and a chaplain.

The bar was located amidst office buildings with a movie theater nearby. It was a narrow room with about 20 seats at the bar. There was not enough room for any tables.

Usually, there were four to five bartenders, all female, working the bar. It opened around noon and stayed open until at least three a.m. every day. On the very first night, i fell in love with Kazyko. Kazyko is altogether another story. Below, i have included a poem about her and Maureen, but let’s return to Judy.

When my rejection from Kazyko ensued, Judy and i became fast friends. i think she wanted me to feel better about what happened with her friend Kazyko. As i had done with Kazyko, i would shut down the town and end up at the Stand Bar Butterfly until it closed at some indeterminate time around three or four in the morning. Judy and i would get a bite to eat, talk, and often we would take a taxi to her small home on a hill over looking the Naval base. We were friends, and although i would often hold her in my arms, it was as a thankful friend only. Nothing else happened. After a couple of hours of sleep, i would walk back down the hill, about three miles, to the base and my ship berthed at an installation outside the naval base proper. i remember the early morning sunrise, the beauty of the land, spoiled only by the strong aroma of the benjo ditches.

Five years later, i went back to Sasebo. Stand Bar Butterfly had moved and downsized. Only one of the young women worked the bar when i found it. She told me Kazyko and Judy had both married U.S. Naval officers and moved to the U.S.

Sometimes i miss Judy and the Stand Bar Butterfly.

Kazyko and the night rain

Before i lost her –
well deserved, i might add –
Kazyko and i walked in the night rain.
She was tiny,
exquisite,
fine,
perfection;
a sense of humor, loving american jazz
and
sometimes a flash of brilliant anger.
i could understand the latter:
her parents died in Nagasaki
from that bomb
while she visited an aunt
outside of Sasebo
where she lived when i met her
and
visited, feeling out of place,
too large for the propane heated
small house on the hill
for dinner of
ramen and sushi
with Kazyko and her aunt.

5 thoughts on “A Pocket of Resistance: Beautiful Women, Sasebo 1970”