There are about 200,000 things i should get done today. It’s the new year, and i have resolved to tackle them all and finish the job…But what the heck? Except for writing, i have quit formal work; it’s the new year; and as Rhett Butler once so succinctly put it, “Frankly, my dear, I don’t give a damn.”

And yesterday, i contacted my friend Steve Frailey, informed him i had not seen him in over three months, asked him if he would be at work today to which he replied in the affirmative, and woke early to go see him.

i left home before six. It was dark. It was cool. It was raining. It all seemed spookily familiar. Surprisingly, the traffic was not bad. Perhaps all the Navy ships in the yards were not up to full gear yet. i pulled up to the security box for the gate. After one aborted try, i remembered the code, and the gate rolled back. i pulled into the parking lot and took a space dedicated to a deckhand.

I was once again at the San Diego base for Pacific Tugboat Service. 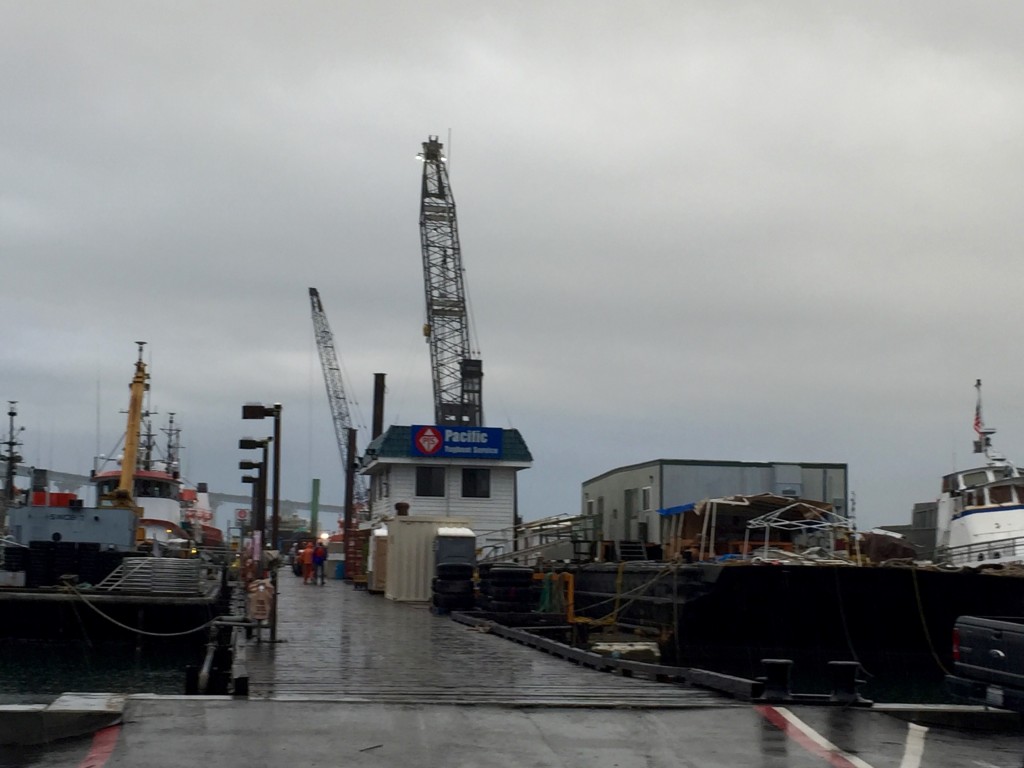 For an old mariner, it was a beautiful sight. This photograph was taken as i left. When i arrived, first light had not come yet. Even so, there were a couple of boats already with “crew on,” and a couple of deckhands strolling down the pier.

The old creosote wood pier, glistening in the rain and pier lights, was still the same. It first captured my imagination about five years ago, reminding me of my early days in the Navy. i never tired of walking up and down this old pier in the two years i worked there. The boats, barges, and cranes were moored differently with a number of additions, but it felt the same.

i opened the office door, walked around the counter, poured myself a cup of coffee, and walked up the stairs to Steve’s small but always busy office. We talked for about forty-five minutes, catching up.

Steve and Grant Westmorland, the owners, have grown the business significantly since i left two and a half years ago. They continue to do it the right way. They care about the business, their customers, and their employees, not necessarily in that order. It works.

And i got to walk up and down that pier again; saying hello to folks i consider my friends; feeling working men at work, a connection to the past, a part of the waterfront.

i will come again, and i will do so in the early morning just before first light so i can see and feel the pier, the machines, the men working in the backdrop of San Diego Bay and the lighted, graceful arc of the Coronado Bridge as light slowly infuses the waterfront.

It was good to start the new year this way: good for my soul.