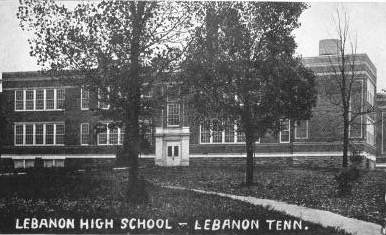 This is the north side of Lebanon High School on East High before it burned down in 1937 (i’m pretty sure it’s the north side, and i think it was 1937 as my uncle, Bill Prichard, the youngest of the Prichard children began school going to multiple shops and homes because of the school had been destroyed and i believe he was a freshman in 1937). The high school was located on the site where Highland Heights Elementary stood for many years. This photo is from  a post card in my parents’ memorabilia.

Other than my uncle not going there, the old building has some family history.

After my grandfather,  Culley Jewell lost part of his hand in the portable sawmill he and my Uncle Jesse constructed from a steam engine they bought in 1918, he became the custodian for Lebanon High School and McClain Elementary. In the 1920’s and 30’s, my father was my grandfather’s primary helper, cleaning the schools after classes each weekday and firing up the boilers for heat early each morning in the colder months.

After one afternoon cleaning the high school in the early 1930’s, Jimmy Jewell was walking home down North Cumberland on the way to his home on West Spring. Estelle Prichard was visiting her mother in a home on North Cumberland where Granny was a 24-7 caregiver. My mother urged my grandmother to the porch to show her the lean young man with a fine mane of hair walking down the street in the bib jeans he wore while cleaning the schools.

Estelle announced to her mother, she was going to marry that young man.

My grandfather was involved with providing a gym for that high school (i do not know where the high school had played basketball previously). He installed the wood floor for the gym in the basement of that high school building. It was where my mother played when she set the season and single game scoring records which stood for a quarter of a century before they were broken by Ann Lucas (1960?) i regret not asking how high the gym’s ceiling was because i always had a hard time understanding how a gym could be in the basement.

But the high school was an impressive structure.