It was okay because i don’t get to be with my daughters, grandson, or son-in-law enough, so when the opportunity arises, i like to volunteer to help out with their schedule.

It did not sound like fun. But i had done it before, and this time, i was getting at least an hour and a half with Sarah.

So i got up at 4:30 (not too far off my usual waking time), got stuff ready, and woke Sarah. We drove to Donny’s, her and my all time coffee place, and then headed north in the traffic. Yes, commute traffic starts getting here in the Southwest corner around 5:45 a.m.). It took us just over ninety minutes but was relative painless. Sarah talked, revealing her soul, which i so admire, for most of the drive.

The drive itself is through the beach area of Camp Pendleton. i love driving through there. i look out at the Pacific and remember the amphibious exercises in which i participated years ago. It is always a good feeling to see the Pacific where i once roamed and from where i headed west of west for what now seems like endless deployments.

But my thoughts about the sea were secondary. My daughter, a beautiful woman, a beautiful soul was talking from her heart, and i was listening, amazed at her insight.

It all stopped of course when we parked in the Disneyland Hotel guest parking. In the lobby, we met Kent Medford and his two sons, Dalton and Dylan. Danita would join us for breakfast when she finished dressing.

We walked to Goofy’s Kitchen. It was a nice buffet, kid oriented (what else?) with Disney characters wandering around to amuse or thrill the guests. One of the best parts of the whole trip was when Goofy, Minnie Mouse, Chip and Dale, and Pluto paraded through the patrons to Zip-a-dee-doo-dah, still my all-time favorite Disney song in my all-time favorite Disney movie, “The Song of the South,” which in response to all of the politically correct yahoos who have made it almost non-existent, had more to do with my understanding of equality because of my love of Uncle Remus and his wisdom.

But back to Goofy’s Kitchen, the parade of characters looped around our area while a little girl in a pinafore outfit crawled out at the entry to our area. The parade skipped through with Pluto bringing up the rear. His left hind paw landed squarely on the little girl. She was not hurt, but Pluto was shocked in dismay. Later Pluto came back, got down on all fours and attempted to make amends. The little girl was having none of it. That dumb looking dog, or whatever he was, had whacked her.

Later, Pluto snuck behind Kent who was trying to get some final work done in the midst of Disney/child/breakfast chaos. Pluto rubbed his rubber whiskers against Kent’s ear. The reaction was hysterical.

My time with the Medford’s and Sarah was good for me. The reason we were there was for the boys to enjoy their adventure, along with their parents, with Sarah, their, for lack of a better term, executive baby sitter. 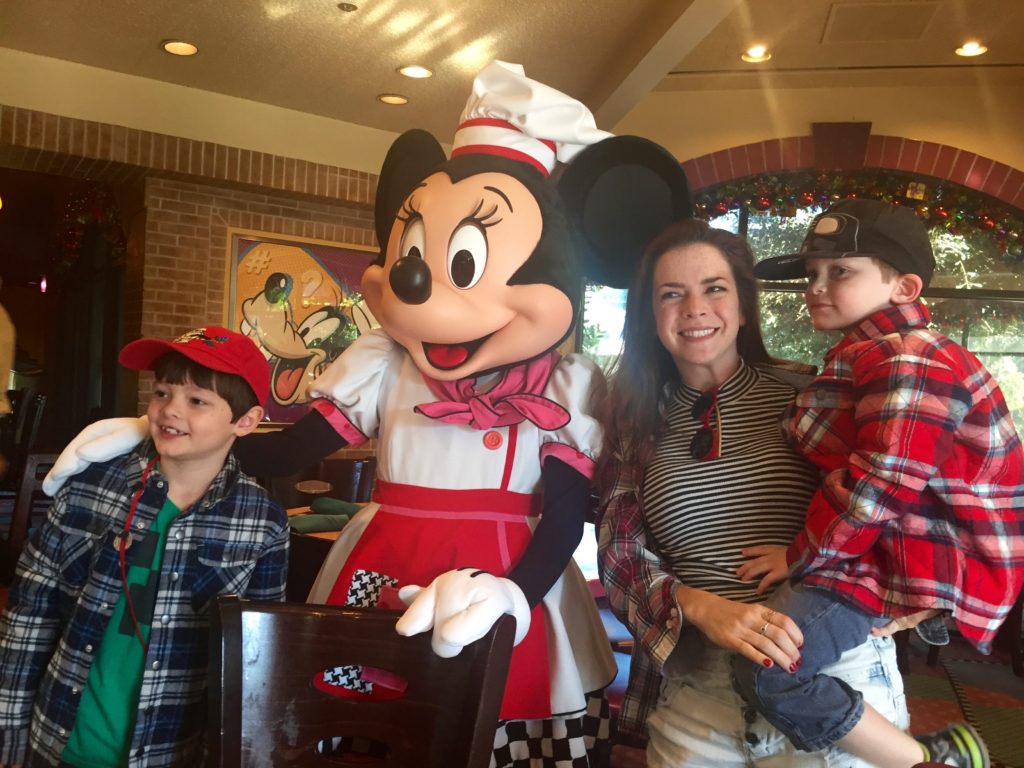 We met the tour guide, a modern Snow White lady in the lobby and walked to the California  Adventure gate. I vouched for Sarah and my retired military status for the discount (the other reason i was there). They entered.

And i drove back to the Southwest corner in I-5 traffic.

After a much deserved long nap, i puttered, and planned for the Thanksgiving prep day tomorrow.

We went to Romesco’s and ate tapas, orejas de mar and cazuelitas de gambas,  with tempranillo for dinner. Afterwards, we went to Baskin-Robbins for Maureen’s favorite dollop (she never eats any more than a dollop of any dessert). Unable to resist, i got a pint of fresh made black walnut.

We came home. While listening to Beethoven, i savored a couple of spoonfuls of Black Walnut with my evening glass of merlot while folding clothes Maureen had washed earlier.

i am wrapping up my day writing this, reflecting.

i marvel at the cost. The closest attraction i remember growing up was the Wilson County Fair out on Coles Ferry Pike, or the mini-attractions of “Two-Headed Monsters,” et al, along the country roads en route to Florida from Tennessee. My connection to Disney was Annette on the “Mickey Mouse Club.”

But watching the children and their grownups in Disneyland, i must say it is a magic, magic place.

And this has been a good day.

i even enjoyed the ride.