This post has been produced from my aunt’s photo albums. i was going to post them in a Facebook album as i have been doing for quite some time, so relatives and friends of my family past and present could enjoy them and download if they were so inclined. Yeh, i know, all of you whippersnappers, i could have put them in “dropbox” and made it accessible to those folks. But that’s a lot of work. Even worse, it is a lot of technical work, and as much as i see the benefits, i am too old to get into that stuff…at least for now.

But when i scanned these today for the purpose of the Facebook album entry, something struck me  to lead me to putting them here first with my comments. i will post them there later for my original intent.

Our world was back then was this thing call family. It was tangible. It was constant. It was even tribal, i guess. It was beautiful. Perhaps it was because when it was. After all, there was a war going on. Perhaps it was because it was in “Brigadoon.” After all, it was a small town smack dab in the middle of Tennessee, and like most of the small towns at the time, people grew up there, most stayed or didn’t wander far from home. i’m not smart enough to figure out why or even how. But it was family beautiful. 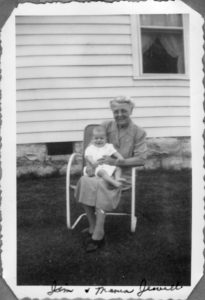 There was this wonderful woman, who came up from the little hamlet of Statesville where her forbears had found sustenance among the fertile patches of land between the creeks and the trees and the bramble of the woods where game was plenty. Her husband, a man of strength and labor by fate, brought her into town so he could work at the pencil mill…well, not really town yet because they first moved out on Coles Ferry Pike and only later to town but even then there was a garden and a root cellar and a wood-fired stove inside and the family grew up there, and she hung on through the first seven years of my life, long enough for me to remember her caring. 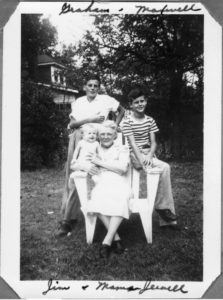 And Mama Jewell had family, eight children, and i lost count on grandchildren, among of whom were my cousins like big brothers to me living across the street on Castle Heights Avenue. Graham Williamson, the fiddler who babysat his cousin while his band practiced in his home and let the young boy sing “Kaw Liga.” The family Jewell saw after each other and my father went with Graham to the West Side Hotel to get the body of Graham’s father, and Aunt Naomi Martin, nee Jewell, the older sister had taken Graham in when her younger sister Virda died in her twenties, and Naomi and George Martin raised Graham like he was their son along with their natural son Maxwell Martin who followed in his father’s footsteps being like a brother  to my father and they all, including me fished on the Tennessee lakes with a passion. 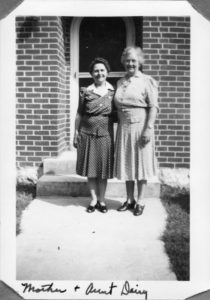 Then there was the maternal grandmother, the one who held her family together like glue and bounced around from house to family house to help take care of her grandchildren or work tasks for her daughter and son-in-law and Katherine “Granny Prichard had a rough life but still managed to enjoy it, her family and her friends. Like Daisy Lawrence who wasn’t Lawrence at the time (Susan Rockett, help me out here), still carrying her maiden name, and they lived across Clearview Drive on West Main Street from each other and became close friends, more like family for the rest of their lives, and more like family for all of us, and became the resting spot for Florida travel amidst the citrus groves. 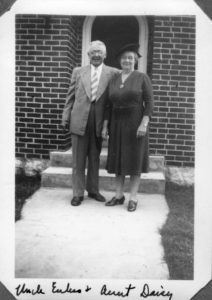 And the man who took her from Lebanon to the citrus groves was a strong and intelligent business man, but his love of family, even the extended family seemed to have no bounds. And when Katherine “Granny” Prichard was tending to her young husband who we now believe suffered from asthma, she gathered up her family and went to the citrus groves where Euless, forever known as “Uncle Euless,” by all of us, and Daisy, forever known as “Aunt Daisy” by all of us, Lawrence took Katherine and her ill husband in and let them stay in the log cabin next to the big house until Joe Blythe Prichard wanted to go home for his final resting place and the family of six gathered in the ambulance-like van and headed north, back home to Tennessee. 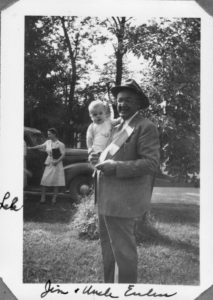 But the Lawrence’s kept coming back to Tennessee, and the Jewell’s and the Prichard’s, and the Hall’s kept going to Gotha, Florida, and Uncle Euless seemed to like me and liked me until he too left us. And in this photo is the new Dodge, which remained a running usable vehicle for long afterwards, and there is no name on the woman resting her arm on that Dodge and i wonder if she might be “Aunt Ella” who was another extended family member.  And the roads to and from Gotha, Florida to Lebanon, Tennessee should have had a rut from all that back and forth: US 231 to Murfreesboro, US 41 through Chattanooga through Georgia until deep into Florida, cut across on US 44 to US 27, around 700 miles, but of course there was family along the way where we stayed.

And the bonds were strong. Then in the spring of 1962, i did not have a girl to ask to my graduation dance at Castle Heights, i just didn’t think those Lebanon girls liked to have more than one date with me. But family came through. My mother and grandmother talked to Aunt Daisy and her son, Douglas, and her daughter Juanita (Susan, did i spell her name correctly?) Browning. You see, the family ties run deep and the Browning’s daughter Susan was a year younger than me. We’d never met, but all parties agreed she would attend my graduation weekend with me.

And she did and she was beautiful and wonderful. Still is. i think about my feelings during those wonderful change of life days and how i felt about her. Sometimes i wonder…but she has a wonderful family in Georgia, and i have mine in the Southwest corner, and we are still family, and that is the way it should be. 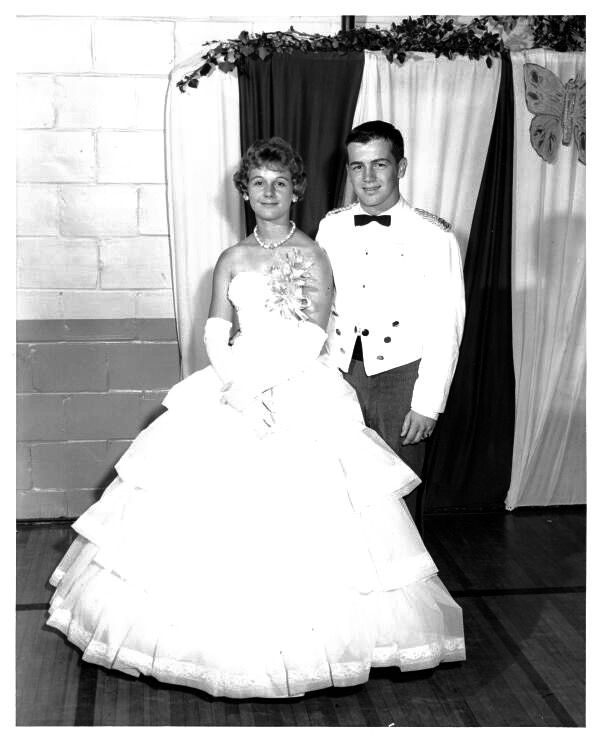 1 thought on “A Different World”