i have been absent from my site for a while. i had a lot i wanted to write (oh why, oh why do i feel compelled to write?) but all of that lot was going to take some time, and i got into this book writing thing, kicking it into high gear for a change, and so i didn’t write here and didn’t hit the post button.

So today, i decided after a bit of book writing, i would do home tasks. By my count this morning, there were about seven hundred and fifty-six, but i haven’t asked Maureen about what she would like me to do for about a week, so i suspect the number has doubled.

We have this courtyard, see. Our garage is in front (i still want my garage in the back. i have had that twice. Once on Castle Heights Avenue before my parents added on the family room and the carport, and then in Bryan, Texas: our house would meet my hopes and dreams if it was flipped and the garage was in the back, but they don’t do that out here in the Southwest corner nor pretty much anywhere else anymore) and the breezeway leads to a hall entrance and a courtyard with the front door into the living room and dining room. It’s a nice courtyard with a history.

We broke damn near every rule for buying a house when we bought this house twenty-eight years ago. i mean we were out for a drive, saw it and the sign, looked inside, and said to each other we want this house. So we bought it. Shouldn’t have, not with breaking rules and all. One of the best things we have ever done…except it’s getting old, so are we, and now the upkeep is eating into my playtime, time wise and money wise.

One of the culprits is the courtyard. i love the courtyard. We don’t use it enough. We should sit out there. We rarely do. When we were house poor after we bought this house against the rules, we looked out into the dirt courtyard for as long as we could stand it, and then we broke some more rules and had it landscaped. Pretty, of course.

My parents helped. We had started. Had the concrete poured (the actual beginning of this tale) and Maureen found the perfect tile for the stoop and the edge of the concrete. “Adaquin” i think they called it. One of a kind from a mine in Mexico. Of course, expensive. Maureen found it. We suffered in our decision until my folks came out for their winter outing, which they did for about 15 years. Somehow, we found a shop in Tecate, across a hole-in-the-wall border crossing about thirty miles dead east from Tijuana. Quaint place then. The knock-off concrete tile looked great. Mother and Daddy bought it for us for my birthday.

They delivered the pallets on our driveway. My father and i laid the tile. It was mostly him. We built the center planter together but he did most of the tile work. Nice place. Good job.  But the bozo concrete company supposedly had this beautiful colored concrete. It looked like it had the measles. So i painted it.

i painted it three more times, sometimes with primer, other times just paint like they told me to do. It never met our expectations. Then the years came and the knock-off concrete tiles begin to show they were made of concrete. i did not like the courtyard. It looked forlorn. The concrete tiles were fading; the concrete was rising to the surface. Gray. Ugh. The paint jobs didn’t hold. About five different paint jobs including the primers and several combinations of the various attempts made the original measles look look healthy.

Now we have a grand plan. We are going to put flagstone in the patio. When we can afford it. i have calculated that will be in about 2040 when i am ninety-six. So i came up with an interim plan. i would paint it again. With a better product now available. One problem: Maureen had to pick the paint and she wasn’t really enthused about my plan. After all, she wanted flagstone. So i brought home a brochure with very small paint samples. She picked one out. Gray. i like earth colors. She likes gray. i, of course, said okay.

i went and got the paint. Expensive stuff with the textured finish. But not as expensive as flagstone. Today there was the confluence of my wanting to get away from this infernal machine for something besides golf and the availability of the paint. i wrote some this morning, did some stretching, ate Maureen’s incredible, apple-blueberry pancakes, and began my project, planned to be about two hours of preps, two hours of drying, and three hours of painting. Good plan.

Did i mention the airplane soot? You see, i have learned about airplane soot. It makes most EPA announced dangers look like ice cream. All of the other dangerous emissions can’t hold a candle to airplane soot if you ask me. We are about four or five miles in a direct line from the flight path into Lindbergh Field, which they now call San Diego International Airport for political correctness concerns. Apparently, the wind patterns normally blow from the flight path directly to our hardscape and outdoor furniture. Our outdoor teak dining table, small patio tables and all of the chairs do not look like teak. They look dirty black…from airplane soot. Our courtyard gets the biggest hit. The soot mixes with the three or four paint jobs, and in addition to being a measles concoction of ugly colors, the courtyard  is extra ugly with the soot.

The soot also complicates painting preps. Power washing doesn’t just take the planned hour. It takes about four. Hours. And i don’t care what anyone tells you, power washing a courtyard with three or four coats of paint and airplane soot is a pain in the ass.

Done. After a lunch break and my every day nap, it is dry. i am excited. i get out the roller and the paint. i get a sample tile because Maureen and i decided we might paint the tile as well as the concrete. i paint the sample. Then i paint about about ten square feet. Feeling good, but i decide i should ask Maureen if i should paint the tile. i call to her and ask her to come out and decide. She opens the door, looks at the paint and gasps.

Now, we have been married for over thirty-five years. i know when Maureen is not pleased. i could tell this was one of those times. Being a complete idiot and frustrated, i say, “What? You picked it out.” This, as i knew it would even as i spoke the words, did not help.

i try vainly to recover. “Why don’t you go down to Home Depot and see if there is a color you like better (than the one YOU picked out, i did not add).?” Dammit. She did. Now, Maureen likes to shop…at Nordstrom’s, at boutiques, at art galleries, at Trader Joe’s. She likes shopping at Home Depot about as much as she likes getting a two-by-four slammed into the back of her head, which i figured she would like to see happen to me as she walked into our nearest Home Depot.

She came home with a gallon of another color. To test. We may do that tomorrow.

i finished the paint job around eight. About eleven hours including lunch and my nap. Of course, it’s not done. i will have to touch up tomorrow. We’ll (we?) have to decide if this is okay or if the sample is better. Regardless, by my count there are at least five to ten more steps in this process.

But it will look good when done, even pretty. After all, the two of us work well together.

i came in, ate the Thai food, Sarah went and picked up for us rather than the steak i was going to grill but ran out of time. i ate, showered, and sat down to write this. Before i started i walked out the front door and took two photos. Our new paint job…in the dark. 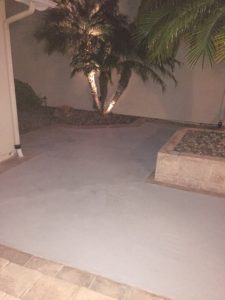 Did i mention there was a beautiful full moon tonight?

2 thoughts on “A Courtyard Tale”