The NFL’s continuing futile attempt to fix something that can’t be fixed, the problem of constant whacking a competitor or oneself in the head with a plastic helmet, has produced yet another silly and unenforceable regulation as well as bringing my recollections of playing the game i loved to play.

If the gamut of NFL’s referees, umpires, field judges, timers, timeout signalers, replay officials, coach advisors call every infraction of the new rule penalizing dropping of the head in making contact, then there will not be one single play after the opening kickoff played in any professional football game this next season. An absolutely stupid and completely unenforceable rule.

As i have noted on numerous occasions, the game is losing its attraction as we learn more and more about concussions and chronic traumatic encephalopathy or “CTE.” i am glad my grandson is not inclined to take up the sport, even if his mother and father would ever let him. Yet playing the sport of football, whether it was the real thing for six years of my life, intramural touch football in college (which was actually worse than the real thing in terms of injury potential), touch football on some field somewhere and even the touch version on the sand of Daytona Beach with players from the Auburn football team, has been one of my greatest pleasures.

Now mind you, i wasn’t a big star. In fact, i was only a first stringer in high school for one game. But i played the game with a passion. My dream of being an incredible broken field runner never materialized. i became a tiny wonder on defense, amazingly playing linebacker well enough to have one good game, the opener in Castle Heights’ 1961 season before injuring my knee in the following week’s practice, thus ending, for all practical purposes, the short, happy football life of “Mighty Mouse,” the moniker my good friend Mike Dixon and Coach Jimmy Allen tagged on me.

Before that career that never would be ending injury, i even enjoyed practicing and suffering my share of blows.

For those who might not know, Castle Heights Military Academy had a post-graduate year of high school. There were several reasons for this. One was to provide athletes an opportunity to mature and be more attractive for football colleges. It was before such a thing as “redshirts,” freshman playing on the varsities in either high school or college, or “one and done.” You started college, you finished college, and then, if you were good enough, signed with a professional team. In any sport. Southern universities often paid for high school athletes to attend the prep schools with post graduate programs.

Georgia Tech’s feeder school was Baylor School in Chattanooga. Castle Heights often got football players with hopes of going to North Carolina, sometimes Tennessee, and a few others as i recall. Because of this, these prep schools had their own conferences. Ours was the Mid-South Conference. Heights, Columbia Military Academy, Tennessee Military Institute, Baylor School and McCallie School of Chattanooga, and Darlington in Georgia were teams in the conference. We also played college freshman teams and junior colleges. It was highly competitive and the post-grads were usually a bit better than the normal high school player, and nearly always bigger.

i played freshman football at Heights. Our record was not that good. i alternated at tailback (Heights ran the single wing for almost as long as Stroud Gwynn was head coach) with Wayne Pelham. One event i remember well was in practice, one of us was on offense and one on defense (well, maybe i don’t recall all that well as i can’t remember who was which). On an off tackle play the runner, whether it was Wayne or me, and the linebacker, whether it was Wayne or me, found themselves facing each other both at full speed. We duck our helmeted heads and tried to emulate rams fighting for a mate. No mate. We both lost. In fact, we were both laid low, stunned, knocked out. We came to in short order, shook our heads and lined up for the next play.

Wayne, having more sense than me, chose to wrestle rather than go on to varsity or junior-varsity football. i went for my dream: football. Now to point out how little sense i had, i was five-feet, six-inches tall and weighed 128 pounds soaking wet when i went to pre-season practice my sophomore year. Our starting lineman topped out at about 250, huge for a high school player in those days. Middle Tennessee. August. 95 degrees, 95 per cent humidity. Dumb me. Lost ten pounds that first practice, drank a half-gallon of Johnson’s Dairy orange drink during the mid-day break, lost another ten pounds in the afternoon. Gained it all back at the evening training meal and breakfast. This routine lasted for ten days of preseason practice.

i did grow. A little bit. My playing weight for my junior year was 135, senior year 145. Height at graduation was the same: five-feet, six-inches. Genes. Mother’s. 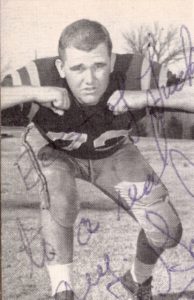 i have several stories about those three seasons of football. But this story with all of that palavering above leading up to the hit. THE HIT. It wasn’t in a game. It was in a weekday practice in my junior year. Garland Gudger was one of the nicest guys i knew in my four years at Castle Heights. He was in his post-graduate year from Salisbury, North Carolina. He weighed around 245 pounds. He was a tackle. i know.

It was toward the end of a usually grueling practice on the field on Hill Street, just east of the drill field. We practiced while the other cadets did close order drill up the hill. Good reason to play football. Most of the time.

The first team had moved into formation for a punt return. The perennial second-string punter, aka me, gave way to the first string punter. i lined up at flanker to go downfield and tackle the returner. The offense was to form a wall down to my right and produce an alley for the punt returner.

Kick. i was off. Somehow, perhaps because i wasn’t big enough to be noticed, slipped behind the blocking wall. i was furiously pursuing the punt returner, on his heels, ready to dive forward for a shoe-string tackle, and be lauded for my outstanding hustle.

However, Garland, standing stodgily in the wall, looked around and spotted my pursuit. So he takes off full bore going in the opposite direction of the punter and the pursuer. Me. He hit me with his shoulder somewhere around my chest. They later told me it was a gymnastic wonder. They said i went up in the air and performed a perfect 270 degree rotation before hitting the ground. Flat. i don’t remember. They sort of moved me around to ensure i was alive, no bones were broken, and all body parts were still intact.

i stirred, shook my head, and went back to the huddle.

i never have claimed to have much sense. But i loved to play football.

Thanks, Gudger for a great memory…even though i don’t remember it all.