Well, you see i stayed up late, much later than usual two nights ago because i was on a roll, writing about the rain and things. So today, i was going to catch up on my writing on my book. It was a busy day with a dental cleaning and the trash men coming and the honey-do’s and a NORP, in fact two NORP’s, so i was going to catch up on that book writing this afternoon.

But somewhere in the midst of all of this, i caught caught up in a Facebook exchange between John Eagle and John Moriarty. In case you can’t guess, these two gents are from Ireland, southwestern Ireland to be more accurate. Kenmare, County Kerry for John Moriarty; Eyeries, County Cork for John Eagle to be more specific. Neighbors practically. John Eagle lives on the Beara Penisula. John Moriarty’s Kenmare is where the the two counties meet where the Beara and Iveragh peninsulas meet (Either John or both, please correct me if i messed this up.)

We are talking about something better than tourist movies or tour booklets or PR flyers. John Eagle captures what i’m talking about in his wonderful photos and artwork: a magical place so Irish with little tainting from the rest of the world…as it should be.

The exchange in today’s entry took me back, not just to that lovely little corner of the world, which so much reminds me of “Brigadoon,” the 1954 movie but mine is in this corner, not Scotland, but also took me back home to Lebanon, Tennessee. It was not Brigadoon, but it was just a step later of what it must have been like a generation or two before (as long as i did not think about the underbelly, the plague of Southern history and the dealings with people of different skin tones). My lovely trip to that little corner of Ireland the two John’s painted for me validated the beauty and gentle people i had only dreamed before. i met John Moriarty then, and i wish i had met John Eagle.

Their exchange yesterday shows just how wonderful a place and the people are in that little beautiful corner of the world. It all started with a rather incredible photo John Eagle posted: 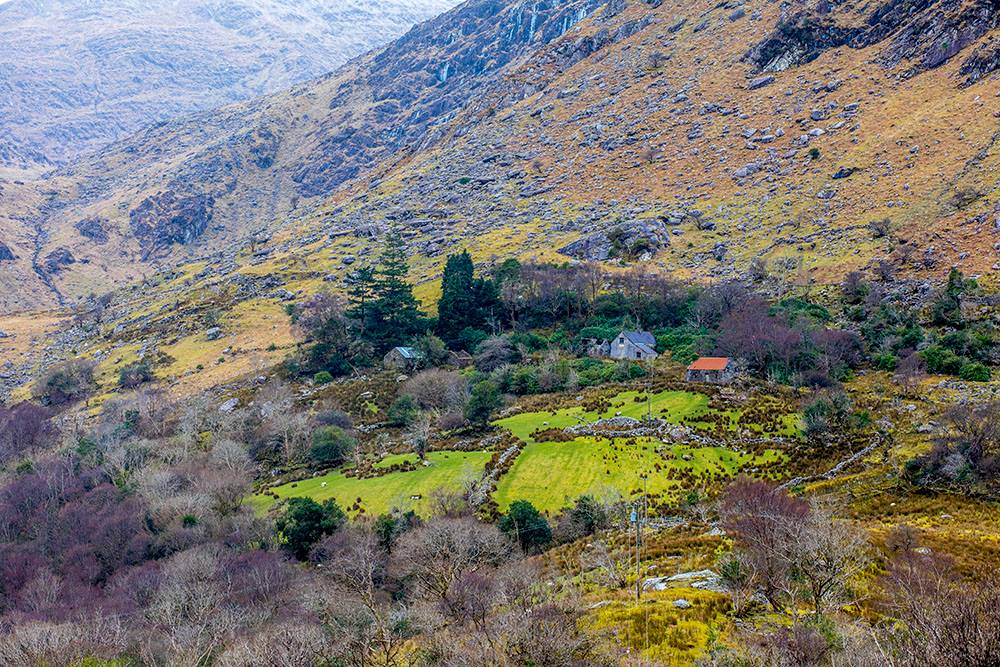 John Eagle posted this with the comment to John Moriarty: “Is this the place where your relatives come from in the Black Valley?”

(For my convenience, i am dropping the “John” from the remainder of this exchange.)

Moriarty replied: “Yes that is my late Mother’s farm.”

Eagle: “I was over there today showing a couple of friends around, they loved it there.”

Moriarty: “Yes, it is beautiful: many happy childhood memories there. Sadly, all my family from there are now with God.”

Eagle: “Sorry to hear of your loss.”

Moriarty: “When I was a child my uncles Patrick and JohnJoe lived there. Both never married. At Christmas, Patrick would have a candle lighting in every window. I used to love going up to the house and seeing it lighting in that upper window in the Gable, that was my Grandmother’s room when she lived. I slept there many times.”

Eagle: “Thank you. That’s a lovely memory. Do you recall anyone living in the ruin that I keep photographing up after the hairpin bends?”

Eagle: “I well remember lighting candles in my mother’s house at Formanes near Eyeries, we were one of the last houses to have electricity.”

Moriarty: “The house on the bend: it must be one of the most photographed ruins in Ireland. That was the Casey homestead as far as I can recall, they were cousins of my mothers family, the Foleys in Kenmare, O Donovans, Davits, Foleys are all part of that family, I think their Grand Mother came from that house. Agnes, she was amazing and years ahead of her time.” 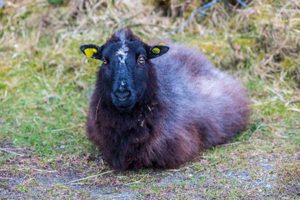 Eagle: “Thank you. I often go into Davitt’s for a bite. It’s an interesting ruin especially with the snow on the hills. I got lucky with sheep today. I put up some images on Instagram.”

Moriarty: “Cool, if you walk further back along the road you will come to 2 houses and tall standing stones, 5,000 year old way markers the original SATNAV.”

Eagle: “That’s interesting. I must go back there. I was once all the way to the end with Dr. Lyne from Castletownbvere who took me up Carrantouhil.”

Moriarty: “You can hike up and over down in to Glencar. Amazing hike.”

Eagle: “I need my strength to return before I can do that. Not sure I will ever be strong enough to do that sort of climb again, but the idea spurs me on” (John Eagle had surgery and all of the attendant procedures a year ago to this day. He is not only a survivor. He’s continues to be a  contributor to goodness in this world).

There were several other comments from several people including one goofy guy, when Mary Jo Knipper McKinley joined in:

“John, Is there where you take your hikes? I would love to hike your family homestead next time we visit. It is beautiful!”

Moriarty: “No, Mary, that is too far away from the hotel to hike there. There is good hiking there up and over the ridge to the right of photo and down into the next village. There are “standing stones” there which are 5,000 year old way markers. The original Google Maps!”

And  then Marie Kissane remembered: “Lots of great nights were had in that house: Singing, dancing & of course whiskey.”

Then, this goofy guy from the Southwest corner joined in asking if could put the exchange on his website, and after getting an okay from both of the John’s, he asked if he ever got there again (moving that way up on his bucket list), if either or both of the John’s would like to take him on the hike. John Eagle responded:

“You are most welcome. I loved hearing what John Moriarty had to say about candles in the windows and who lived in ruin up the road. I think it’s been the best news thread yet. Thanks again, John.”

And then John Eagle told me he would be happy to do that hike with me.

Now folks, there is some magic here. It is a magic place. Those folks are magic people. They seem to have reduced life down to living, enjoying that magic corner, not getting wrapped up in all of the insanity seemingly surrounding us. It is as i remember Lebanon, Tennessee three-quarters of a century ago, even though now i know it wasn’t what it appeared to me, just as i am sure those good folks have their problems as well. But they are of the earth, being people dealing with people. Good people.

So all of you folks stay at home. i don’t want you to crowd that wonderland. i want it the way John Eagle’s photo and John Moriarty’s recollection has captured it.

For those of you who ignore my request and go there, look up John Moriaty at the Park Hotel in Kenmare. He’s the head bartender and the all knowing when it comes to good whiskey. And find John Eagle. He has some of the most incredible photos and artwork of that part of the world. His website is http://www.johneaglephoto.com/index.htm.

Thanks to you two John’s. You have made my day…no, my life a little bit brighter.

1 thought on “A Peek Into Why i Love Ireland Thanks to two Johns, Moriarty and Eagle”