In my preface to “Tiger Water,” i claimed i had not seen Blythe in eleven months when i wrote the poem in November 1981. That was incorrect.

As i was thinking about that rather incredible ten months in the Western Pacific, i remembered the time line, accurately this time. i deployed as the Current Operations Officer of Commander, Amphibious Squadron Five on the flagship, USS Belleau Wood (LHA 3). Bruce Brunn, the marine major also on the staff and i flew to Oahu in early January. There we planned exercises with the Marines who would ride us throughout the deployment before we embarked on the squadron ships when they arrived.

We went throughout WESTPAC and the Indian Ocean, returning to San Diego in August. i was in San Diego for about four weeks. Blythe joined me for two weeks of that stay and my parents were here for a substantial period of Blythe’s visit. i left in early September, flying to Perth, Australia to join the USS Okinawa (LPH 3).

We returned to San Diego just before Christmas. Blythe met me in on our stop in Pearl Harbor where i took leave and spent a week with her on Oahu and flew back with her to San Diego before she returned to Austin. But perhaps, our short time together in August made me even lonelier for the rest of my time on deployment that year. Here is the next Willie Nod adventure.

Willie Nod ran away.
He had argued with his mom and dad.
As usual, Mom and Dad won.
So he told them they didn’t love him,
slamming the door to his room. 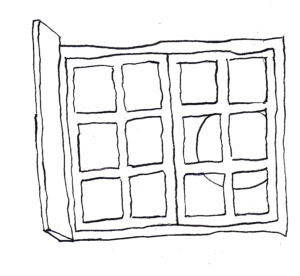 Later that night, Willie Nod slipped out of his window and ran away.
he found it was not especially hard,
except he had to leave the dog and cat behind.

Willie Nod walked out of the light of the street lamps
until he reached the woods.
Willie Nod went deep in the woods
before he looked for a place to sleep.
He found a soft bed of leaves next to a log.
Night sounds of crickets, owls,
and wind whistling through the trees
did not frighten Willie Nod for
he loved the animals and the trees.
He felt kin to the wind.

Even with the soft, sweet smelling bed of leaves and
the sandman friends’ sounds of the night
could not put Willie Nod to sleep.
He was not afraid.
He was lonely. 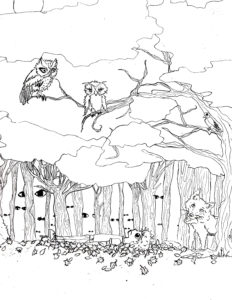 Deep in the night, Willie Nod was startled when
he began to understand the night sounds of the owls,
wise old birds,
the crickets and the occasional howl of the coyotes.
They were talking to Willie Nod.
He knew he could talk to them, but remained silent.
As he lay on his forest bed,
the animals told him how much he was loved.
As he lay there with the stars
peeping through the leaves,
Willie Nod realized the animals were right.
The animals told him he ran away because
he was angry at himself, not his parents, for
getting caught, for not being as good as
he knew he should be.

The wise old owls told him that he was angry because
he was ashamed to have his mom and dad
know he was not as good as he could be.

In the early morning, crying over,
Willie Nod walked back to his home.
He snuck into his room.
The dog licked his face;
the cat rubbed against his leg:
they almost gave him away.

Willie Nod crawled into bed
feeling good because
his mom and dad loved him and
he had talked to the animals
and
his run away was over.

1 thought on “Willie Nod Runs Away”