This was the last poem in my Willie Nod book for Sam at Christmas in 2014. i will add others i have written later. i wrote this while i was in Newport, Rhode Island for “Prospective Executive Officer” training at the Naval Destroyer School. i was at a critical point in my Naval career and headed for my last (although i didn’t know it then) operational tour. i was to be married in two months and facing the fact i might actually have to grow up. Blythe was eleven. i was thinking she was growing up also. So i decided i’d write about how Willie Nod felt about growing up.

Willie Nod
Has been thinking about growing up.
Not that he’s made up his mind,
Mind you:
Just thinking about it;
Thinking about leaving his friends,
Those dogs and cats, ponies, lions, ducks and rabbits,
Behind.
“Where would he go?
“What would he do?”
You ask? 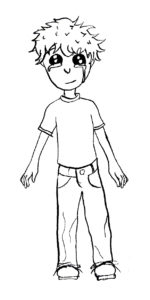 Well, he would drive his car to work,
Play with lots of paper,
Argue with people,
Not laugh very much,
then
Drive home again.
Ugh.
Maybe not yet.
Maybe Willie Nod
Won’t even think about it yet.

1 thought on “Willie Nod Growing Up”