This is one of the rare poems i wrote for Blythe without including Willie Nod. i was in the Philippines at the Subic Bay Naval Base in November 1981. It was a wonderful year for me as i spent 10 months that year at sea in the Western Pacific. i loved it, but i was also very lonely for my daughter who i had not seen in a year. i was lonely and needed a bit of nonsense to cheer me up, so i wrote this for Blythe, hoping she would laugh and cheer me up. 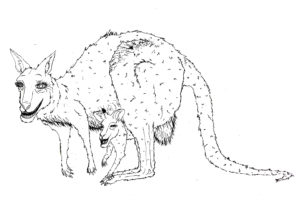 Tiger Water, Billy Bumble,
Why do they ask
Why I mumble?
I’ve gone and seen a kangaroo;
She laughed and called me a “big wahoo.”
You might ask why
I knew she was a she:
In a  belly pouch was a small joey
who, although he screeched it in a jumble
Said his name was Billy Bumble.
I marveled,
“Who’s heard of a joey named Billy?
“Doesn’t that strike you as rather silly?”
His mother, the ‘roo, indignantly replied,
“A wahoo like you should be fried;
“Billy will grow strong and proud
“With nothing the matter,
“I’ll bring him up on ‘Tiger Water.”
“Tiger Water?” I laughed till I cried,
But quickly stopped as soon as I spied
A hint of a tear in the kangaroo’s eye. 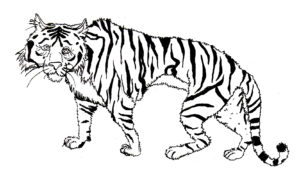 Tiger Water?
Billy Bumble?
And you wonder
Why I mumble?