It hasn’t been a particularly good weekend.

i dedicated the two days to finishing our trellis painting after Paul Shipley and Jacob helped me…er, the two of them putting up the last replacement beam with me helping, and my posting the next installment of my book in progress.

Well, strange weather bit me in the…ah, you know. Pacific storms forming and then riding the Japanese Current after hurdled across the Southwest corner in spades, taking our derogatory term “May Gray” to a new level. Therefore, no painting on the trellis.

Worse, my installments are now dependent on my actually completing the draft. That’s why i went to a one a week on Sundays rather than two a week. i’ve got most of the stuff lined up through the deployment, but i wanted to make sure it all was correct from the standpoint of when and needed the ship’s logs on microfiche to verify.

i ordered the logs about twenty years ago, maybe more, at least before microfiche became antiquated. i had also bought a reader when they were abundant and cheap. But in my wisdom (not) while cleaning out the garage attic, i tossed it forgetting i needed it for the ship’s logs.

When i began this project, i realized i needed to read the microfiche. i bought a reader on eBay for $120 but the seller forgot to tell me it had been converted to battery power. i hooked it up and smoked the mother board. The guy took it back and refunded me but it set me back about two months.

So i started looking at libraries around here to find a reader. There were only two within a reasonable distance i could determine actually had one. So i spent about ten or twelve days driving to San Diego State and the Chula Vista main library to record the logged events up to the Yosemite arriving at anchorage of Masirah, Oman.

Since i’ve reached that point in the installments, i drove to the Chula Vista library yesterday. When the reader light would not come on, i went to the desk to determine why. It broke. They didn’t know when it would be fixed.

i thought i would try the internet again. i found several on eBay and Amazon. The ones on eBay seemed reasonable, like in the $200 range. However, they required the buyer to pay shipping which came close to doubling the cost. Boo.

So this morning, i decided to travel to SDSU and use the one i had found initially. i walked through the rain to the library, went down three floors to the basement, walked down the hall to the microfiche room where a locked door had a notice reading “Closed Until Further Notice.”

i was distraught so i did what all good sailors do. i came home mid-morning and had a beer.

Before taking my nap, a requirement for old farts who have a beer mid-morning, i decided to take one quick stab at Craig’s List. Bingo. Rick had put one up for sale two weeks ago. Twenty bucks. i took Maureen and Sarah to South Park, bought my monster, and took them to The Rose Wine Bar for lunch, a double good thing.

So the bottom line is there is not a real installment on the book today. i will get one out in the next day or two. The good news i am no longer inhibited by the lack of microfiche readers. After all, i have this monster: 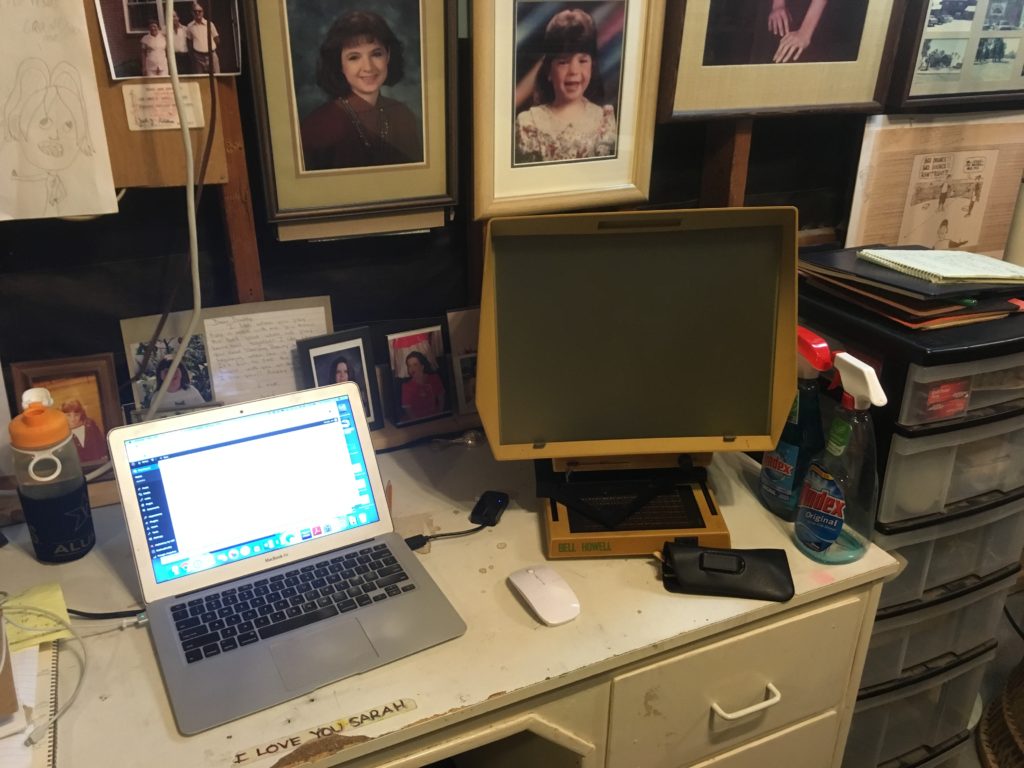 Stand by. Installments on their way.