This began when i had one of the three best combinations of CO’s and XO’s i had in my Navy career of ten sea tours.

i don’t know why thought of this came into my head this first day of 2020. i mean, the regular two-year overhaul, scheduled to last six months began in September. Commander Max Lasell had just relieved as Captain and Louis Guimond remained as XO. i was still the First Lieutenant until the sitting ASW Officer completed his tour in early October, when i would relieve him. The ship steamed to the Boston Naval Shipyard, nee Charlestown Navy Yard (now long gone). i have about fifty sea stories of those six months. but there is one memory that sticks in my mind and replays over and over again.

The Hawk transited up the Mystic River to the main yard  to begin the  six-month overhaul. In late October, Hawkins left the yard and piloted to the Navy dry dock in  South Boston. The transit was one of my last days as the first lieutenant, subsequently becoming the Anti-Submarine Warfare (ASW) Officer. One of the bigger jobs in the overhaul was the upgrade of the sonar and ASW fire control systems, costing four million dollars in 1968, or just under $30 Million in today’s dollars. So after the ship was docked and the water was pumped out, i was one of the first to go to the floor  of the dock and study the underwater hull, now dry and sitting on the huge wood blocks.

i was awed by the size of the ship, especially the sonar dome which increased the ship’s draft by about ten feet. More impressive was the dock itself. It was dock #3. Reputedly, this dock was built to hold the RMS Queen Mary. At the top right of the  1946 photo below, the Queen Mary is in Drydock #3. 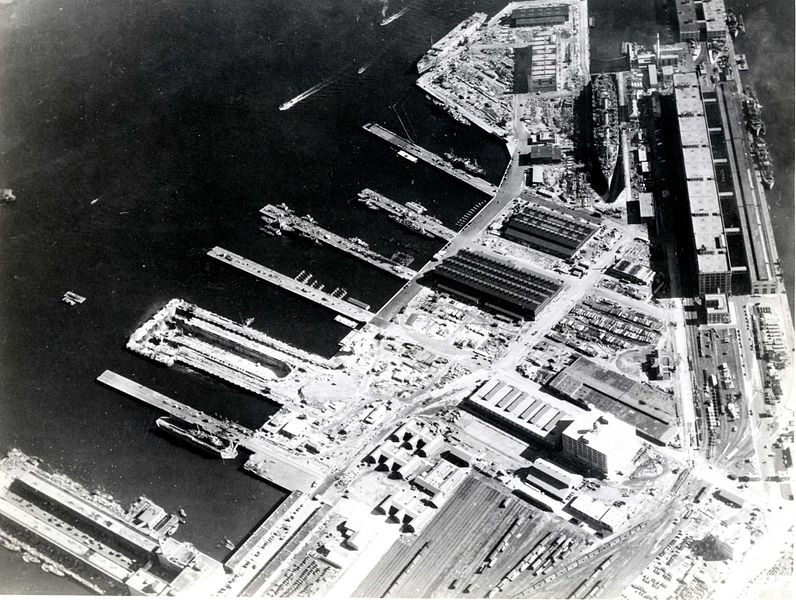 Queen Mary‘s length is 1,132 feet (She currently is in pier side on the mole pier in Long Beach open for tours with the staterooms  available for lodging) compared to Hawkins’ length of 391 feet. The British liner has a draft of 34 feet compared the Hawk‘s 14.5 feet (extended to over 20 feet with the sonar dome attached). Queen Mary has a beam of  147 feet while Hawkins was 40 feet wide.

The Hawkins rested on the massive wood blocks as we descended to the floor  of dry dock #3. Shipyard personnel escorted the captain, the executive officer, the chief engineer, and me to the floor of the dock as we checked out the screws, the various intakes and discharge valves and, for me, the sonar dome.

i was an ensign. i really didn’t do much more than gape at what i saw. My lasting impression of my destroyer sitting on those blocks in the dock built for the huge liner was “a toothpick in an empty bathtub.”