After my personal introduction to NJP, it was six years before i got to witness it in action again, or at least a variation of it (i think i’ve written of the sea stories before in other places). 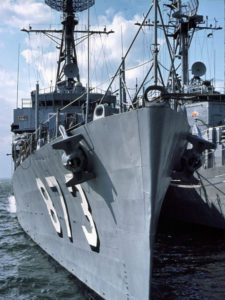 i reported to my first ship, the USS Hawkins (DD 873)  in Malaga, Spain in April 1968, and  rode her on the last stages of her MED deployment (that is “Mediterranean” for landlubbers, not “medical”). i relieved the First Lieutenant as the ASW Officer would not rotate until late September that year at the beginning of an overhaul. In those days, the first lieutenant had a bunch of sailors in first division who were more likely to go to mast than most divisions. Not all, but most.

So once we got back to homeport, i spent a lot of time with report chits, XOI, and captain’s mast. The CO, Commander Tom Nugent, was…well, let’s not go there, but he was a stern taskmaster. Strangely, he was lenient at Captain’s Mast. i had several of my boatswainmates get off a lot lighter than i expected.

Then, while late on the evening (2000-2400) Officer of the Deck (OOD) watch on the quarterdeck, i learned the old way was still in my Navy. A very drunk seaman, one of mine in first division, came back from liberty and was so inebriated, i wasn’t sure he would make it across the brow. He was belligerent. When i attempted to calm him, he started cussing me out. As a fresh ensign i was trying to figure out how do deal with the kid while the petty officer of the watch (POOW) called the duty master-at-arms on the 1-JV sound powered phones.

The duty MAA was a first class gunner’s mate. He was big, burly, stout, and ugly. He had a crew cut and his muscles bulged from the tee shirt with one sleeve rolled up to hold his package of camels. He came up to the quarterdeck, saw what was happening and put his arm around the belligerent, drunken sailor.

“Come on, son,” he soothed, “Let’s go down to the boatswain’s locker and talk about this.”

They walked forward together, and i was relieved the incident was over.

The gunner’s mate took the young man down to the boatswain’s locker and gave him an old fashioned ass whuppin’.

i know this happened because i came from officer’s call the next morning to quarters for first division. There in the first rank was the offending boatswainmate. i expected him to look pretty bad because he had to be hungover, but he also looked like he had been through a meat grinder. The gunner’s mate had exercised the old style of discipline. My chief explained to me how it worked.

Wisely, i did not question what had happened.

Within a couple of weeks, i saw the old style at work again. First division had a strapping young seaman who was not overjoyed about being in the Navy and was often questioning authority. It did not help that he was also extremely prone to seasickness. If the ship rolled a little bit tied up to the pier or in a nest of other destroyers, this guy would blow lunch.

He had managed to piss off the First Division Leading Petty Officer (LPO), BM2 Carrier. i don’t know exactly what he did, but Carrier was my man second only to BMC Jones, whom i relied upon. Carrier held my hand and escorted me through some tough times. He also was old school, sailor, and back then, liberty cards were used to control who left the ship. The duty section would not be issued liberty cards at quarters. Those not in the duty section, would be given these cards to show to the quarterdeck to get approval to depart after liberty call. The division LPO issued the liberty cards at the close of morning quarters.

It was a Friday. When the LPO issued the liberty cards at quarters, he strangely could not find the seaman’s card. This was a frequent occurrence for sailors who upset the chief or LPO. This meant the seaman would be on board for the entire weekend.

Shortly before the noon mess and early liberty call at noon, i went down to inspect division berthing on the first deck underneath the fantail. The upset seaman was in berthing and seeing me, he became a sea lawyer, screaming about his rights and how the Navy couldn’t do this to him. Again, i was flummoxed and trying to decide how to handle this.

Chief Jones, was about 5-8, a soaking wet 130-pounds, wiry, wrinkled, and about to retire with 20 years in about a month or so. He was also checking out the spaces. Up on the main deck, he heard the seaman yelling below. Chief Jones slid down the ladder to berthing, ran over to where this 6-2, 190 pound kid was berating me. The chief grabbed the seaman by the front of his blue chambray shirt at the chest, pushed him up against the bulkhead and then lifted him up until the seaman’s feet cleared the deck. The chief then launched into a profanity laced tirade that would have made the coarsest of sailors proud, concluding with something along the lines of “don’t you ever confront an officer and deal with your problem on board; see  you at quarters Monday” (Well, i’m sure that wasn’t exactly what he said, but it was close).

LCDR Louis Guimond was the XO, a mustang coming up from the ranks after being a submariner in WWII. He was tough and the crew feared him as he would give them no quarter. Shortly after we went into overhaul at the Charlestown Naval Shipyard in South Boston (the USS Constitution is now moored there), the new CO, one of my best, CDR Max Lasell, went on two weeks of leave. Once again, i had a seaman put on report and forwarded from XOI to Captain’s Mast. i was very concerned. The acting CO was Louis Guimond, the feared XO, who would conduct Captain’s Mast. The seaman had reported aboard almost six hours late and was an unauthorized absence. He had not divulged his reasons at my investigation nor at XOI.

Mast was held on the bridge. When the seaman stood at attention before the podium, Louis asked him why he had not reported as scheduled. Roughly, here is the seaman’s story:

Well sir, my flight got into Logan Airport a bit late, so i hurried to catch a cab. Then when we were going through Callahan Tunnel, the cab driver started hustling me about giving him my guitar. We got in an argument. So i jumped out of the cab with my guitar, i got lost a couple of times but i walked here from the tunnel.

i held my breath. i was waiting for the XO to lower the boom. Louis studied the man’s service record paused for a minute, and said,

“Son, i should give you the max: reduction in rate, half pay for three months, restriction to the ship for thirty days, and 45  days extra duty.

“But that is one of the best stories i ‘ve heard for a long time at mast.

“You are dismissed with a warning.”

And that, my friend, is Navy justice at work in the old days.