i wrote this column for The Lebanon Democrat in the summer of 2008. i still laugh when i think about the Subic Navy Base in the Philippines.

i laughed even harder when in a 1979, i watched the “Saturday Night Live” parody featuring John Belushi about a Navy recruiting commercial of those days. It started pretty much the same with inspiring music with the voice over stating “It’s not just a job, it’s an adventure.” The SNL skit showed a Navy ship and then zoomed in with Belushi and other actors in Navy dungarees on their knees cleaning a head, working in a steaming laundry, and chipping paint.

Then the camera zoomed out and the announcer regally intoned as he did in the real Navy ad, “Join the Navy and see the world.” Returning to the ship, the announcer proclaimed the latest in exotic ports: “Bayonne, New Jersey.”

There was a lot of truth in the parody, but i beg to differ. Of course, i was an officer and not subject to the menial labor the enlisted had to endure. But it was an adventure, often an arduous one, but an adventure. And i did get to see the world. Somewhere, someplace, some time, i posted either my retirement speech or a summary of the part where i listed all of the places the Navy allowed me to visit. In short, i covered a lot of the world. i did not got to Northern Europe , around South America, or all the way to either pole. But i got pretty much everywhere else.

Of all of them, Subic was closest to “Fiddler’s Green,” the mythical paradise for seaman. It was wild. It was wooly. Often, it was dangerous. But boy, was it fun. The column didn’t tell all of the tales of Olongapo. It wouldn’t be well accepted in a a small town local newspaper. But here is my recollection from ten years ago:

My Friday arrival in Lebanon and events of the previous week have produced significant and insignificant problems requiring my attention. After dealing with these problems, I need to step away for a few moments. So I have chosen to revisit the far side of the Pacific.

My Navy career sent me to many places. My shipboard stops also allowed me to see foreign ports from a vantage most travelers never experience.

Over 14 years at sea, I discovered some special places for me. Many have changed beyond recognition, but others have maintained certain aspects which can take me back to those adventures at sea.

Subic Bay, Philippines is not the same. This U.S. Navy port was home away from home for several generations of sailors. Our presence was established after World War II, leading to the 1956 commissioning of the base. In 1959, the Navy ceded some land back to the Philippines. The town of Olongapo was born.

It was a bawdy, wild, and inexpensive sailor’s liberty port. The stories are wilder than most folks can imagine, and from what I saw, they are probably true.

One of my favorite stories about Subic and Olongapo concern my father. In 1975, Jimmy Jewell flew from Lebanon to Honolulu, joining around thirty other family members of the USS Anchorage (LSD 36) crew on our return to San Diego.

After standing out of Pearl Harbor, I was the officer of the deck (OOD) for the evening watch (8:00 p.m. until midnight). My father stood most of the watch with me.

I described loading and off loading Marines and equipment as well as the zig-zag route Anchorage took from Pearl to Vietnam, backtracking due to changing commands and typhoon avoidance.

At some point, my father asked me which port did the sailors like the most. I pointed out the sailors not only liked Subic the most, they were upset their time there had been limited.

He asked why they preferred Subic. I then described what went on in the legendary liberty port. 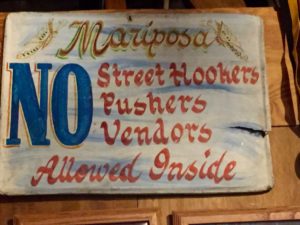 I told him of how I would watch the crazy antics from the Mariposa (butterfly), an open air restaurant on Magsaysay, Olongapo’s main road. We watched a ribald comedy in real time. A painted tray hung on the wall which declared restaurant rules: “No shoe shine boys, No vendors, No street hookers allowed inside.”

When I delicately told my father of the carrying-on’s in Olongapo, he shook his head and did not believe sailors could like the place.

Then over the course of the five-day transit, Jimmy Jewell went around the ship talking to the crew. He asked them what they liked and disliked about the deployment.

Five days later as we were preparing for entry into San Diego Bay, my father and I were talking again as I stood watch.

“Son, I couldn’t believe you could be right about the sailors loving Subic,” he said, “But they sure do.”

Europe versus the Far East

Constantly, my wife and I discuss where we should vacation. She has lobbied for Europe where she traveled through three summers in the 1970’s. Although I too have spent time in Europe and the Mediterranean, I argue we should travel to the Western Pacific.

We have been to Europe several times. We both love Ireland, Paris, Monte Carlo, and Barcelona. Eventually we want to visit Europe again.

In 1988, Maureen went on a business trip to Taipei, Taiwan and spent a day in Hong Kong. Her short stay convinced her the Western Pacific would be a good place to visit. Five years later, we spent a week in Hong Kong on a group trip she earned through business. Hong Kong was even better than either of us anticipated.

Now we both hope to go back and visit Japan (not Tokyo, but Kobe, Kyoto and the island of Kyushu), Hong Kong again, Singapore, and Taiwan.

I am glad Subic Bay is no longer a U.S. Navy Base. It has been turned into a tourist mecca for the Philippines. I am glad my wife is not interested in going there. I definitely don’t want to revisit, especially with my wife.