i was sitting at my desk in my home office, pretty much just wasting time and amazing myself at how it seems i always have more to do than can be done, never have enough money to do those things, and how long it takes me to get anything done.

Then i quit playing spider solitaire and decided to do something.

A couple of days ago, i wrote a post about V-Mails. There were six V-Mail letters i received with a nice note from my cousin, Nancy Schwarze. She always writes nice notes. The V-Mails were from my father to my aunt and uncle, Nancy’s parents. He wrote one from Gulfport, Mississippi where his 75th Seabees were waiting for a Liberty Ship to take them through the Panama Canal and on to the Southwest Pacific into the teeth of WWII (where he wrote the other five letters).

i wrote of him and some of my thoughts on him and his letters.

Today, i sent the originals to my grandson, named after my father, not me. i scanned them before i sent them because i realized the scanned letters could say more better than i ever could,  conveying a sense of time, the past, a moment in history as no writing ever could.

As i was doing this, i also ran across a document from my past. It is a Western Union “Mailgram” i sent it to Maureen in October 1983. i was in the Indian Ocean, on the USS Yosemite probably anchored of the Island of Masirah, Oman. We had been married three months and spent about two weeks total together before Yosemite got underway from Mayport, Florida for an eight-month deployment.

i compared my father’s V-Mails to my “telegram” morphed into a wire mail.

My father’s correspondence was received by the recipients some months after they were composed. Maureen got my note within a couple of days, maybe just one day. Now, the communication to folks back home can be instantaneous. But no less heartfelt.

My sense of father’s anxiety and loneliness is palpable to me. He was in hot humid lands of the Solomons, New Guinea, and the Philippines. i know. i have been there. Mine was in the hot, dry (even though at sea) Indian Ocean on a ship the vintage of my father’s military experience but modified to have air-conditioning, which, of course, frequently broke down. Sailors on today’s Navy ships have high-grade climate control, not for them but for all of that sophisticated electronic equipment, which cannot stand heat and must have controlled humidity to operate correctly.

My father was in the middle of it. A Japanese attack by land, sea, or air could have wiped out his battalion and him at any moment for just shy of two years. The enemy was easy to identify. The threat i faced in the IO was less imminent but more shadowy, unknown, and less likely. Today, the threat for our personnel also is shadowy, more of a terrorist nature, but still with lethal possibilities.

My father was fighting to save his country, our country, from domination by foreign terrors, governments run by tyrants with no limits on their murderous prospects. i was and today’s military personnel are fighting in foreign waters and lands with nothing really clear except the threat being real, more to suppress the threat than defend the downfall of our country. Still for those at the front a real possibility of dying.

When my father wrote, he had no idea when he might come home. When i served, i suffered the “mid-cruise” blues on nearly all of my deployments, certainly feeling that loneliness when i wrote my telegram. i do not know the extent of that feeling of loneliness of today’s soldiers, sailors, and marines. But i suspect, even though communications to and from home are so much easier, they still suffer those blues.

Regardless, i decided to include photos of one of my father’s V-Mails and then my Western Union Mail Gram. After all, the scans do convey a sense of time, the past, a moment in history as no writing ever could. Had i samples of today’s communication between deployed military personnel and their loved ones, i would include them. But i don’t have such and even if i did, it would be electronic. 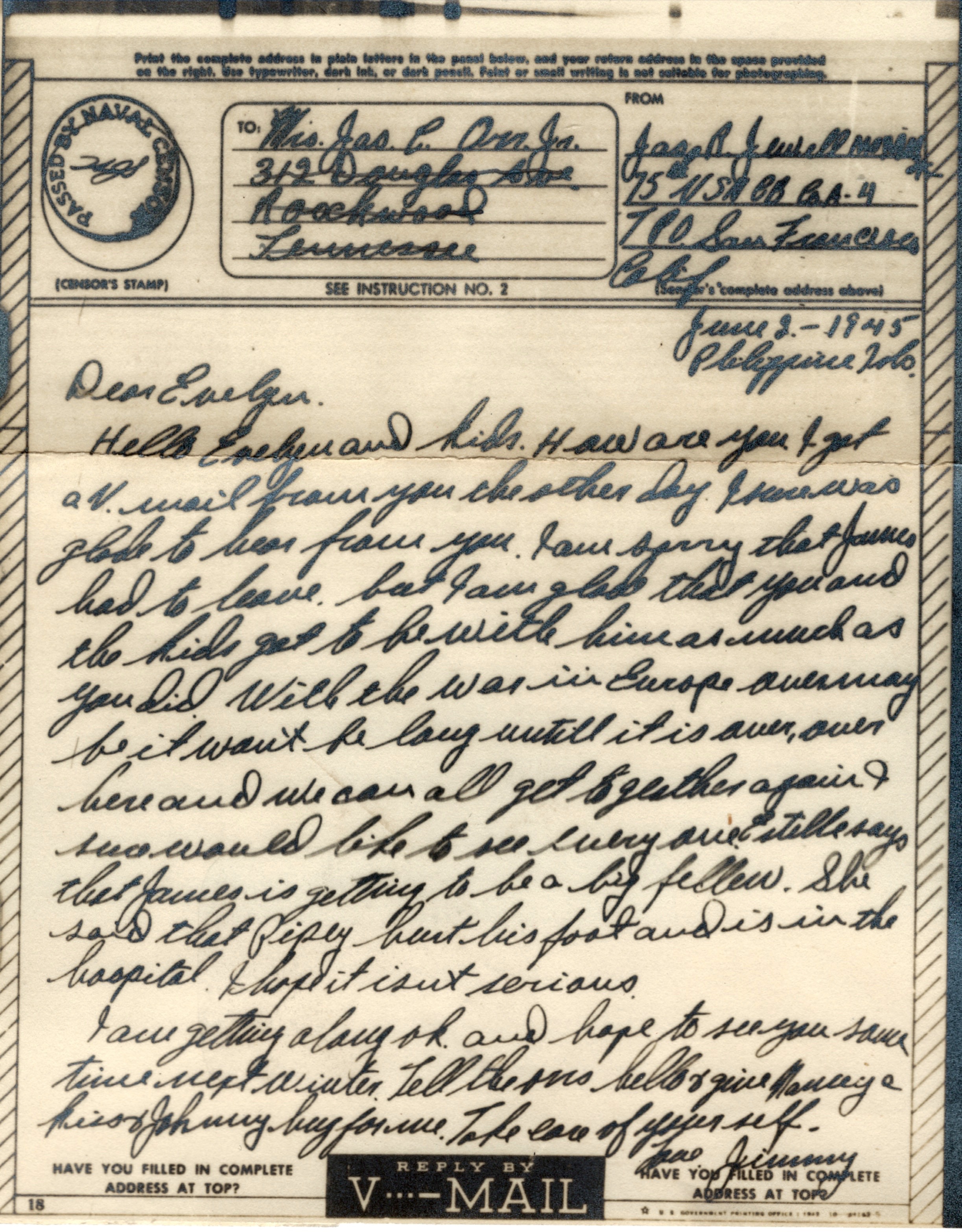 The envelope in which the one above was sent: 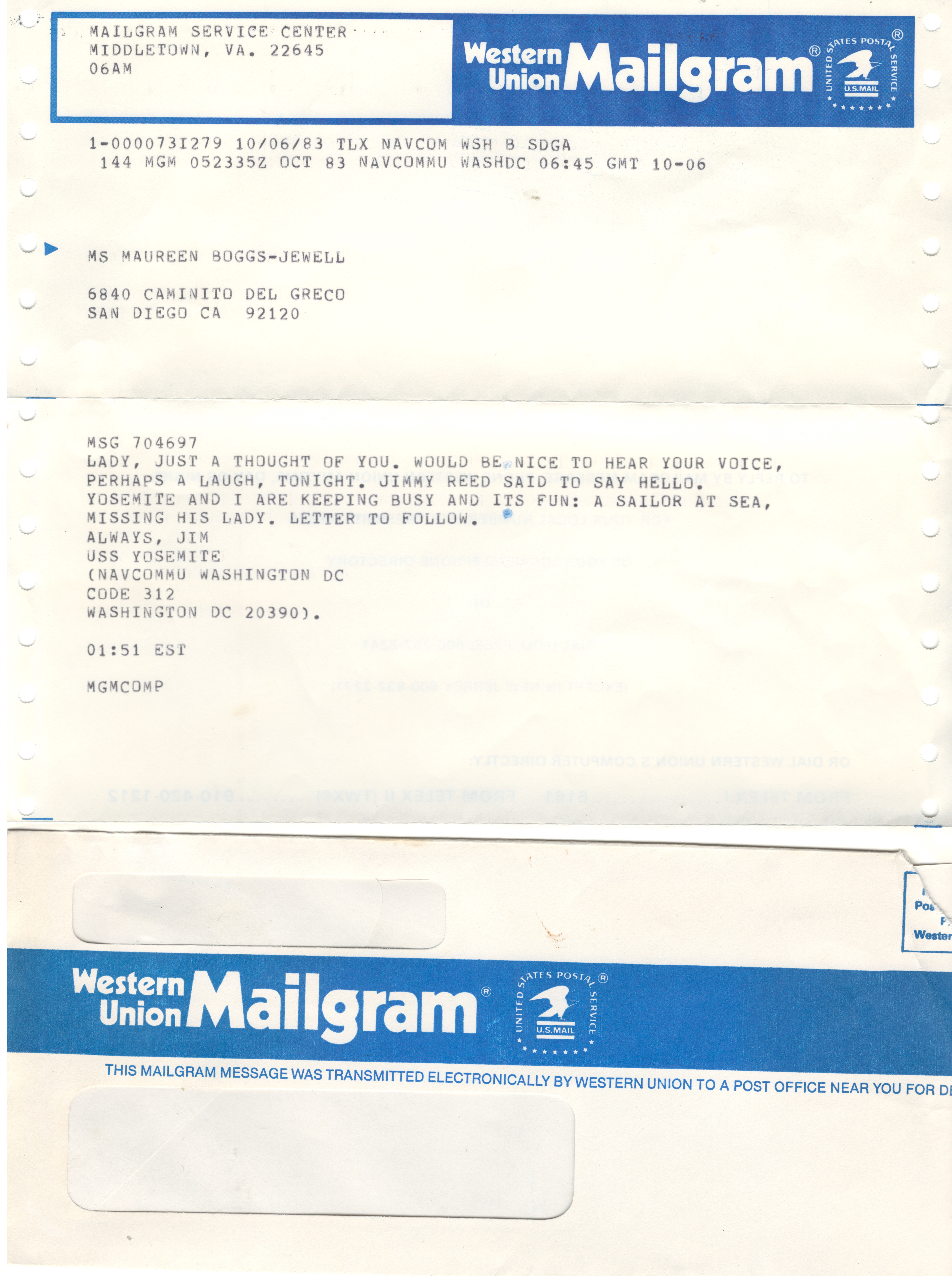 1 thought on “Letters a While Ago Revisited”