This was not easy. i decided i would stick to the photos i have in my computer’s “Pictures” file. You see, there are approximately 284,321 photos of her i have in various places. One reason i have that many is i never was with her enough. For the first six years, i was deployed to the Mediterranean and the Western Pacific and when i was home, i had jobs that were not nine-to-five, but more like an average of 0500 to 1800.

Then she was with her mother and i was in other parts of the world, even though i used all my available leave time to be with her, never quite 30 days a year due to operational requirements.

Now she is in Austin, Texas, and i am in the Southwest corner.

Happy Birthday, Blythe Jewell Gander. i am so proud of you for what you have been and what a wonderful woman, mother, and daughter you are now. Wish we could be with you today.

This was taken July 3, 1972, the morning after she was born at 9:37 p.m. EDT in Watertown, New York. Her mother was a trooper. Back in those days, many hospitals, including this one did not allow the fathers to be in the delivery or labor rooms. i waited on a cold bench in a small dark area. i got to see her for oh, about ten minutes afterwards, kissed her mother, and immediately called both sets of grandparents to let them know they had a granddaughter. Also back in those days, we didn’t know if she was a girl or a boy. i’m glad i had a daughter. She captured my heart then and still has it. 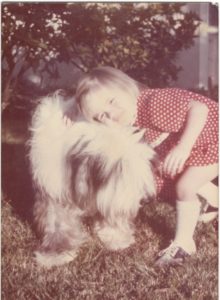 With her Snookers in Pacific Beach Navy Officer Housing in 1975. She had a cat, BK named after her aunt as well. She was so much fun and loved to go to Disneyland and other fun places, especially with her grandparents when they visited from Paris, Texas or Lebanon, Tennessee.

This was the last year i was the live-at-home dad. Shortly after this was taken, i headed to the Western Pacific. Except for having to leave her there, my time at Texas A&M was wonderful, primarily because of her. 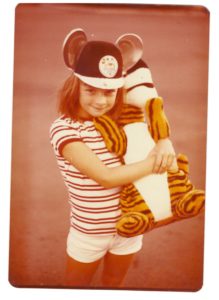 After that, i would travel to Texas or take her to where ever i could during my leave time. Her mother was very good about allowing her to fly alone to be with me. She loved the rides. After this trip to Disneyland, we went to Knotts Berry Farm. She loved Montezuma’s Revenge, but when we boarded the small cockpit of the Loop Trainer and began to rotate up, she was not a happy camper. She was screaming, i was holding on to her for dear life while trying to keep toys, candy, and my camera from flying out. Afterwards, we went on a carriage ride when she told me she wanted to go back to the Loop Trainer. We did. She loved it. i loved her even more.

Every once in a while our time would include my parents. i spent 10 1/2 months of 1981 deployed to the Western Pacific and Indian Ocean. In between those two deployments in August, my parents visited me in Coronado while Blythe and i were seeing the Southwest corner in my Rx7 she helped pick out. 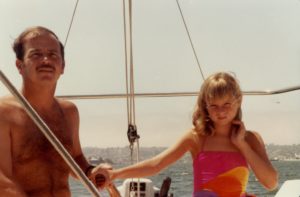 She and my buddy, shipmate, and apartment mate, became good friends. Here, Blythe and i are at the helm of JD Waits’ sailboat on San Diego Bay. 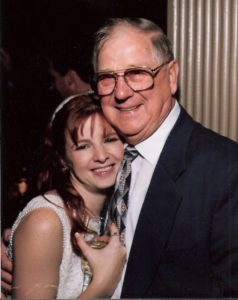 Then she met this sailor when visiting Maureen and i and the two of them kept finding ways to be in the same place, and then in 1996, they got married. At the reception, my toast included the observation that her grandparents had an incredible marriage and i thought Blythe and Jason had the best chance of being just like Jimmy and Estelle Jewell. Her grandfather was very special to her. 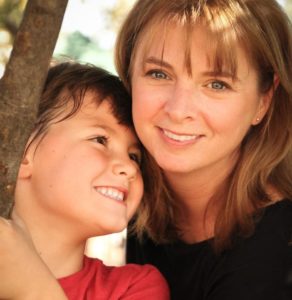 Then in 2007, Samuel James Jewell Gander was born (the middle two names for her grandfather). My heart gushes when i see them together. 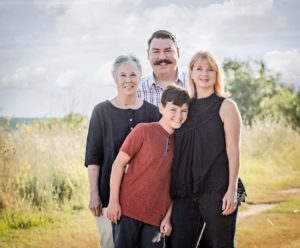 There are many more photos and many more tales i could tell, but i will close with letting you know she remains beautiful. She is a business success. She is creative, intelligent, and passionate about what she loves. One of the best parents who ever lived. She and Jason go so well together. And she also takes wonderful care of her mother.

2 thoughts on “To Blythe”