Lately, in discussions with former shipmates and  other old sailors, rough seas have been discussed. i experienced rough seas on my first night aboard the USS Lloyd Thomas (DD-764) and fought back seasickness as the radar gang was trying like mad to make me sick (a ritual described here previously). My first ship after commissioning, the USS Hawkins (DD-788) experienced enough bad weather off of Cape Hatteras that she experienced her maximum roll of 45 degrees, dangerously close to her “point of no return,” i.e. if she went much farther she would just keep going and capsize. That was rough. i was chased by a typhoon across the South China Sea, forced out of Hong Kong liberty by another (my wife was there to spend a week with me), and actually in the eye of a hurricane when it was forming in the Caribbean. But in a weekly column in The Lebanon Democrat several years ago, i described the worst storm i experienced in 15-plus years of sea duty.

Notes from the Southwest Corner: Stormy weather? It seems so calm to me

SAN DIEGO – Late last week (2013), a friend called early in the morning to tell me it was raining downtown.

“Rain,” I said, “What rain?” There was no hint of rain only several miles away. “Yep,” Steve responded, “It’s raining real rain here.”

Rain in June is rare here, spot rain even rarer. So there is yet another Southwest weather corner mystery.

The call regenerated thoughts of storms. Even though I was in the eye of a fledgling hurricane as I recently related, it was not the worst storm I experienced.

That storm came unannounced and unwelcomed. 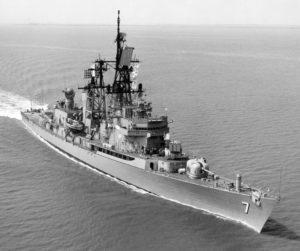 In December 1972, the U.S.S. Stephen B. Luce (DLG-7) returned from a Mediterranean deployment with Destroyer Squadron 24. Being the holiday season, the squadron was allowed to exceed the normal limit of 15 knots.

After crossing the Atlantic on a great circle route to Charleston, SC, the U.S.S. Stanley (CG 32) detached and headed toward its homeport. The other five ships turned north toward Newport, RI, expecting to cover the 1000 miles in about three days, arriving two days ahead of schedule.

There were no warnings about what was ahead. Even without satellites, Navy weather stations normally did a decent job on weather reports, but not this time.

When the storm hit us, wind speeds approached 100 miles per hour, perhaps even more.

The bridge of the Luce was 75 feet above the water line, and green water, i.e. real waves, crashed against the bridge windows almost in relentless rhythm.

We tied bridge watch standers into their posts. Only the officer of the deck (OOD) and his assistant remained unfettered to frequently shift from side to side for better vision. Mostly, this OOD stood behind the center line gyroscope repeater with one arm around a handrail, making small course changes to find a better course.

The bow would climb up a wave and about one-quarter of the 500-foot ship hung in the air above the ocean before crashing down, the bow plunging under water before settling out briefly and starting up the next wave.

Foam covered all the sea except when the wind gave a glimpse of the dark blue ocean. The other ships were often within a 1000 yards but seldom seen except for their masts, the rest of the ship hidden by the waves.

Our watertight doors proved less than that, leaking from the pounding seas. Over a foot of water rolled about the main deck passageways. The galleys could not keep food on grills or steady in the ovens. We ate what was available, cold. We did manage to make coffee for almost five days.

The Luce took innumerable 45 degree rolls. Hanging tightly on a bridge wing, it seemed as if I was parallel to the sea.

When two other officers and I ate in the wardroom, the chairs were tied to the tables, unavailable. We propped ourselves on the floor against the port bulkhead. After a bite or two, the ship rolled fiercely. We lost our seating and tumbled across to the starboard side, sandwiches and coffee flying everywhere.

One enlisted man with the top rack in a three-tiered section was sleeping peacefully when another jolt tossed him out and down, across to the adjacent tier where he landed in the lowest rack with another startled sailor.

On the one frigate that was last in making Newport, a freak wave crashed off a forward bulkhead and ripped a three-foot hole in the back of the forward gun mount. The ship experienced flooding forward but successfully secured the breach with damage control.

When we pulled in, none of the Luce’s usual weather deck projections remained: life lines, fire stations, and damage control equipment were gone. Ladders (stairs to the landlubber) between decks had disappeared. Plenum chambers for air vents had been ripped back from the exterior bulkheads, eerily resembling giant wings.

Remarkably, we only had one major injury. At the storm’s onslaught, our assistant navigator took a dive into the brass around the chart table and cut a gash in his forehead, requiring several stitches.

Strangest of all, the sun shone daily through the entire ordeal.
Never before and never after have I been so glad to be home for Christmas.

3 thoughts on “The Roughest Seas…for me”